Iron Ladies Pissed off the Ministers and Got Napalmed?

(This post includes the translated script and the video of meeting between the anti-Chinese Copper Mine protesters and government ministers led by U Aung Min on 25 November.)

The so-called Iron Ladies, as labelled by New York Times’s Thomas Fuller in his articles, were now behind bars in Burma’s notorious Insein Prison after being teargased, firebombed, and arrested at the Chinese Copper Mine site near Monywa in Middle Burma.

And more than 100 Buddhist monks and farmers protesting at the mine site were injured or burned. Some were so badly burnt they ended up at nearby Monywa and Mandalay hospitals.

So, after showing extraordinary restraint last few months, what triggered President Thein Sein’s so-called reformist government to unleash a brutal strike against the anti-Chinese copper mine protesters led by the so-called Iron Ladies, a couple of landless peasants from the villages destroyed by the Chinese Copper Mine?

Main reason I believe was the face-losing way the arrogant Iron Ladies treated the group of President’s minsters, all former senior army officers, who had come down to the mine site to meet them and work out a compromise with them. 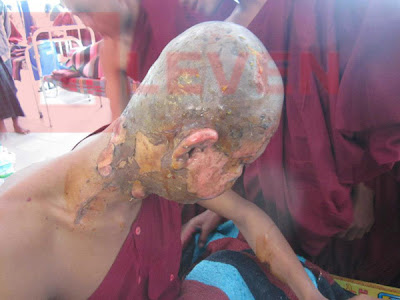 Did Thwe-Thwe-Win one of the Iron Ladies piss the Ministers off?

On 25 November a group of government ministers led by U Aung Min the special minister for the President arrived at the protest camp and they immediately sat down with the protest leaders for a fact-finding, informal meeting.

The meeting was recorded on video and the tape was immediately released to the media organization both domestic and local. I saw the video and it immediately reminded me of the video of that infamous meeting the Chinese student leaders had with Chinese premier on the eve of brutal crackdown of Tiananmen Square protests in China in June 1989.

In that Chinese video the aged-leaders of Chinese Communist Party were basically pleading with the young student leaders their grandsons’ age to return to the classrooms. But the arrogant young men took the situation wrongly and treated the old men like shit. And next day the old men sent the tanks and armed-soldiers of PLA into the Square and the rest was history.

I translated the conversation in that video of meeting between Iron Ladies and U Aung Min and readers will make their own minds after reading the script if Thwe Thwe Win one of the so-called Iron Ladies caused the all-powerful minsters to lose face at the meeting and after the video was released internationally.

Especially the part where U Aung Min was admitting their government is really scared of Chinese since China could easily destabilise Burma again like what they did by supporting CPB (Communist Party of Burma) for more than 20 years since immediately after the 1967 race riots in which thousands of Chinese in Rangoon were slaughtered by the Burmese mobs.

After many months of showing extraordinary restraint the ex-generals has now shown the burning fire within their collective belly that they would do anything for their country to survive among three most populated countries China and India and Bangladesh.

In the process Burmese government wouldn’t hesitate to burn the deviants alive even if they are labelled Burma’s Iron Ladies by the most influential newspaper The New York Times and supported by the foreign INGOs. 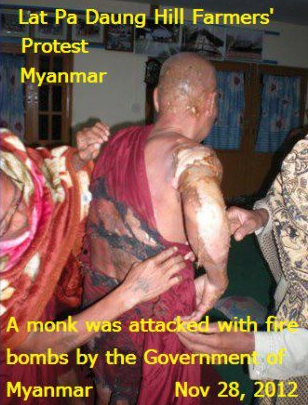 Translated Script of fact-finding Meeting at the Copper Mine site

(U Aung Min and other ministers meeting Thwe Thwe Win and other protest leaders.)
Posted by Hla Oo at 11:40 AM