(This post is the news article direct from the Ceylon Today.)
A Sri Lankan youth employed as a domestic aid has been arrested in Saudi Arabia for worshiping a statue of the Buddha, which is considered an offence according to Shariah law.
According to the Bodu Bala Senaa, the youth bearing passport no. 2353715 identified as Premanath Pereralage Thungasiri has been arrested by Umulmahami Police, which is a grave situation.
The organisation states that information has been received regarding a plan that is underway to behead a Sri Lankan youth employed in domestic service in Saudi Arabia. Although a complaint has been lodged at the Foreign Employment Bureau, Battaramulla, under complaint no: CN/158/1205, so far no action has been taken.
While the youth is a Buddhist, the charge levelled against him is that he paid obeisance to the Buddha at the house where he was employed.
The Bodu Bala Senaa organisation further said those employed in Muslim countries are prevented from practicing their religious faiths, and if found to do so are punished severely. Recently a Sri Lankan woman was arrested for gazing at a child at a shopping complex, where she was accused of witchcraft, on the grounds that she had a black cord around her wrist.
However, the organisation accused the Foreign Employment Bureau officials of not educating the Sri Lankan workers travelling to Saudi Arabia regarding the laws in those countries pertaining to religious rights. Therefore, many of our migrant workers in Saudi Arabia face these situations due to their ignorance of the prevailing laws of those countries.
On prior occasions too many Sri Lankan female domestic workers were forced to embrace Islam, and wear the traditional attire, while so far four Sri Lankan youth have been beheaded in that country.

(There are at least 400,000 Buddhists mostly the foreign-born workers and a few thousands Buddhist citizens living the horrendous lives of constant fear in Saudi Arabia, according to the 2007 International Religious Freedom Report of US State Department. All these Buddhists are strictly not allowed to practice their religion as fundamentalist Wahabi Islam prohibits it.

So these Buddhists have to worship secretly in their homes and well-hidden house-temples like what early Christians had to do in the Roman Empire. And if any Buddhist is caught practicing Buddhism in Saudi Arabia his or her head is liable to be chopped off in public like the poor Buddhist man in the photo below.) 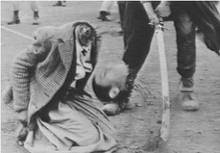