Is Pro-Muslim MSF Behind the Troubles in Arakan?

First part of this post is Thomas Fuller’s article in New York Times criticizing the native Yakhine Buddhists in Arakan for intolerance towards the world famous charity MSF or Doctors Without Borders, and hindering MSF’s aid works in Arakan of Burma.

Second part is an article written by Tin Win Myint a Yakhine Buddhist journalist explaining why his people are really angry at MSF for their taking side of the Bengali Muslims illegally entering Arkan State and grabbing the traditional lands and fishing grounds of Native Yakhine Buddhists after slaughtering the native Buddhists.

Third part is the original letter in Burmese released by the All Yakhine Native Refugee Committees (Sittwe)  stating their refusal to accept any foreign aids from the UN and other INGOs in Burma and the direct translation of the letter.

The group, Doctors Without Borders, reported that many of its local staff members were afraid to work at refugee camps and medical centers in Rakhine State, where people wounded in clashes need treatment for wounds from guns, knives, arrows and other weapons.

“I’ve never experienced this degree of intolerance,” Joe Belliveau, the operations manager for Doctors Without Borders, said by telephone. “What we really need is for people to understand that giving medical aid is not a political act.”

The violence dates to June, when long-simmering resentment toward Muslims, some of whom come from Bangladesh, erupted after Muslims were accused of the rape and murder of a Buddhist girl. More than 70,000 Muslims fled their homes; most remain in the refugee camps. Another spasm of violence late last month left 89 people dead and displaced an additional 35,000, according to the United Nations.

The initial fury was focused on the Rohingya, a Muslim minority widely reviled in Myanmar and a large segment of the population in Rakhine, an impoverished state bordering Bangladesh. But now members of at least one other group, Kaman Muslims, have been forced from their homes, raising concerns that the violence could spread to other parts of Myanmar, where Muslims make up about 4 percent of the population.

The Office of the United Nations High Commissioner for Refugees has reported the widespread deployment of Myanmar security forces in Rakhine State, but also widespread fear there. “Our staff spoke to displaced people who shared their fears of being attacked again if the troops leave,” a spokesman for the office, Adrian Edwards, said in a press briefing on Friday.

Aid workers have reported severe malnutrition among children and widespread malaria. “There’s a huge group of people who have not been displaced but are cut off from health care,” Mr. Belliveau said.

But he said that posters and pamphlets threatening aid workers who treat Muslims were being distributed in Sittwe, the largest city in Rakhine, and that staffing in the area had been reduced to a few dozen people, from around 300 before the June violence. “Our own staff are simply scared and unwilling to work after receiving direct threats,” Mr. Belliveau said.

The difficulties facing international agencies in Rakhine underline the instability of the area — and the potential for further violence despite the security forces. Many of Myanmar’s ethnic groups are restive, presenting challenges for President Thein Sein as he leads the country out of decades of military dictatorship that justified its repressive grip in part by citing ethnic insurgencies.

I have been studying the actions of these so-called International Non-Governmental Organizations (INGOs) providing humanitarian assistance in our Arakan since well before the recent Muslim riots.

Particularly the organization helping the Bengali Muslims who have been reinventing themselves as so-called Rohingyas and trying to establish Rohingya Islamic State out of our Yakhine land by using their human rights as a cover.

That organization is very well known inside Burma and all over the world and its name is MSF-Holland or Doctors Without Borders or AZG – Artsen Zonder Grenzen.

MSF-Holland or AZG has its country office for Burma in Rangoon on Bawdhi-Yeikthar Street of Kamaryut Township. The head of mission is Mr. Peter Paul and it has twelve senior decision makers but the final decision is always made by Mr. Paul. The twelve senior staff are as follows,

Vickie the Deputy Head of Mission an English national is directly appointed by MSF’s Holland headquarters to handle the political affairs in Burma and her academic background was International Affairs and Politics. And she strictly controls two projects in Arakan State.

There is another important person in MSF-Holland who is actively involving in promoting the Rohingya cause. Her name is Jena and she sits at the MSF’s Thailand Office and responsible solely for gathering and relaying the bad news about Rohingyas (the Bengali Muslims on Burma-Bangladesh border) to the world.

She was previously the MSF’s Project Coordinator of Northern Arakan Project (Butheedaun and Maungdaw) and she regularly visits Butheedaung-Maungdaw area to collect Rohingya information under the disguise of collecting health statistics in that troubled region. She last visited there in November 2011.

MSF-Holland has entered the Sittwe and Butheedaung-Maungdaw area since 2004 and following are their officially stated Health Activities in Arakan State of Burma.

Primarily in northern Arakan MSF has employed and trained local Bengali Muslims as primary health care workers and through them MSF has collected basic health statistics and also whatever information they desire.

The local Burmese-Muslim doctors and the MSF-trained Bengali-Muslim health care workers employed in Arakan by MSF meet every week and one of the main purposes of these weekly meetings is to record so-called human rights violations by the local authorities.

The collected information are recorded as original documents and the written documents are submitted to the MSF Project Coordinators for their approval and once approved the documents are entered into the computer files and the digital files are sent to the Rangoon office and then the Thailand office and finally to the MSF headquarters.

To protect absolute secrecy the handful of Burmese or Buddhist staff working for MSF in Burma are never allowed to attend the weekly meetings attended only by MSF foreigners and their trusted Bengali-Muslim supervisors.

MSF senior staffers trust especially the English-speaking Bengali or Burmese Muslim Translators. One of their main tasks is to conduct so-called Exit Interviews with the Muslim patients discharged from the hospitals in Burma. MSF is so eager to record and report the so-called discriminatory treatments Muslims received in the hands of Burmese Buddhist doctors and nurses working in the public hospitals of Burma.

One last thing I want to say about MSF-Holland in Burma is instead of their stated goals of family-planning and population-explosion-control the MSF doctors and senior staff have been constantly encouraging the Bengali Muslims to breed as many as possible, as their religion Islam has proscribed, by keep on telling them that it is one of their human rights.


(At the end of 2011 MSF-Holland has more than 1300 local staff in Burma and most of them are either Burmese Muslims or Bengali Muslims on the border. During last July Bengali riots two local Bengali Muslim staff , Kyaw Hla Aung & Win Naing, of MSF were detained by the Burmese authorities accusing them of instigating and actively participating the race riots in Maungdaw and Sittwe. Altogether ten Bengali-Muslim staffers working for UNHCR and other INGOs were arrested and charged with riots-related crimes.)

(By All Yakhine Native Refugee Committees: Published on 14 July 2012)

Followings is the direct translation of four points refusal letter explaining why the Yakhin Buddhist refugees has refused aids from UN and all other INGOs.

1. We stand behind our President and we wholeheartedly support his clear statement and his firm standing on illegal Bengali Muslims  during the meeting with the head of UNHCR.

2. According to the Year 2000 Millenium statement issued by the United Nations the UN itself and any other INGOs are to respect the sovereignty of any country, and strictly follow the local laws dealing with peace, security, law & order, international terrorism, and armed insurgencies.

3. But here in Arakan the UN agencies and INGOs have been completely neglecting us native Yakhine Buddhists who are fully eligible for international aids, and one-sidedly supported only the so-called Rohigyas who actually are illegal Bengali Muslims. The direct outcome of their discriminatory actions was 2012 June Muslim Riots when so many of us native Yakhine Buddhists were killed and their properties destroyed by the terrorist Bengali Muslims.

4. Thus we Yakhine Buddhists will be totally refusing the ineffective small aids given by the UN and INGOs. 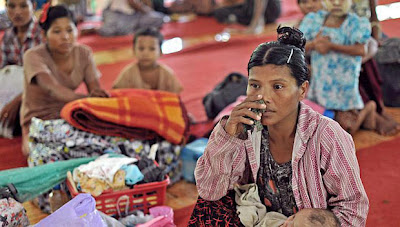 Related posts at following links:
Population Explosion in Bangladesh
Bengali Shwe-Youk-Doola and His Enormous Family of 82
Posted by Hla Oo at 3:08 PM