Reading James Hansen's book, Storms of my grandchildren; the truth about the coming climate catastrophe and our last chance to save humanity (published by Bloomsbury, 2009) is quite an experience.

Dr Hansen is no scaremongering quack, but one of the world's most respected climate scientists and former director of NASA's Goddard Institute for Space Studies in New York.

His book predicts the end of Bangladesh through global warming.

The average educated citizen could perhaps be forgiven for thinking that global warming is a relatively minor problem; how can individuals take it seriously when the media and the world's governments ignore it?

As Dr. Hansen elaborates, that is because the supposedly democratic systems of government now commonplace have simply resulted in the best governments that money can buy. It turns out that the oil, gas and coal industries have more than enough money to bend practically any government to their will with promises of cheap energy, industrial growth and jobs. 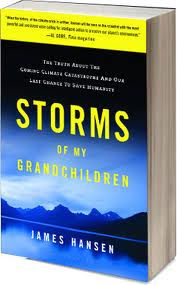 This is particularly true in the US, where George W. Bush's refusal to ratify the Kyoto protocol on reducing greenhouse gases led to the collapse of international climate change talks and endangered all of our futures.

Dr. Hansen gives a personal account of how the same Bush administration tried to silence him as well as the rest of NASA on the issue of global warming, going so far as to remove any responsibility to study and protect the Earth from NASA's vision statement. The truth is that every day we continue to burn fossil fuels, the likelihood of catastrophic climate change increases.

Perhaps many people have heard and shrugged off the findings of the International Panel for Climate Change (IPCC) which forecasts a likely sea level rise of only a metre or two in the next century. However, Dr. Hansen points out that the IPCC estimate is most likely drastically underestimated, as geological records tell us that sea level rise is likely to be much higher.

As he mentions on page 13, “Global warming of 2 degrees Celsius or more would make Earth as warm as it had been in the Pliocene, three million years ago. Pliocene warmth caused sea levels to be about twenty five metres (eighty feet) higher than they are today”. Even a 20 metre warming is enough to submerge all of Bangladesh except North Bengal and Chittagong Hill Tracts.

It should be mentioned that the focus of all international climate change negotiations is to limit global warming to 2 degrees. This is because 2 degrees warming is the threshold that will cause severe consequences for much of the world, not just low-lying areas like Bangladesh.

In effect, this makes 2 degrees of warming the global target; most countries see no benefit from the expensive and politically inconvenient cutting of carbon emissions necessary to keep global warming less than 2 degrees.

This logic virtually ensures that actual warming will be 2 degrees, since that is by definition what all countries will find it rational to aim for in terms of their carbon dioxide emissions reductions. In that case, Bangladesh has effectively been doomed by the global community, which shows no sign so far of even ensuring that global warming is bound to the 2 degree target. Current levels of carbon emissions could easily cause 3 or more degrees of global warming and even more catastrophic effects; not that it would matter for Bangladesh. We'd already be underwater at 2 degrees.

In that case, what are the options for Bangladesh's 150 million people? The wealthy and educated will always find some new country to migrate to. The lower 95% of the population will face a grim end, though it may take a century or so for the full effects of global warming to kick in.

If climate change really becomes as bad as Hansen says it will, then the only real way for Bangladesh to adapt is to drastically reduce the population in a controlled way for the next century.

This could be done through a draconian one-child policy, similar to China, but that would be extremely unpopular and politically difficult. However, global warming may leave us with no agreeable alternatives.

It is astonishing that major scientists like Hansen can seriously discuss scenarios such as the above in books, and our policy-makers seem to care little about climate change other than getting their fair share of climate change adaptation funds which various donors are handing out.

The idea of adaptation to 80% of Bangladesh going underwater is simply absurd. If the rest of the world had any real concern for Bangladesh's survival, it would admit that adaptation to such drastic change is impossible, and try to limit global warming to a level that would ensure our existence.

This would need to be considerably less than 1 degree Celsius, requiring almost completely stopping burning of most fossil fuels very quickly. This is the only happy solution; all fossil fuels, especially coal, need to be phased out within the next decade. They need to be replaced by renewable energy such as as solar or wind, as well as nuclear power; the latter is the only immediately available non-fossil fuel based electrical source for large industrial power requirements.

Dr. Hansen's book is uniquely personal, narrating how the birth of his grandchildren forced him to accept responsibility for trying to safeguard their future by becoming a anti-global-warming activist. Bangladeshis similarly need to start worrying more about the world in which their future children and grandchildren may be born into.

(The writer holds a Master of Theological Studies from Harvard Divinity School, and is author of the website www.liberalislam.net.)

Related posts at following links:
Population Explosion in Bangladesh
Posted by Hla Oo at 10:55 AM