(This post is the article written by a Bangladeshi at the Pakistan Defence Forum.) 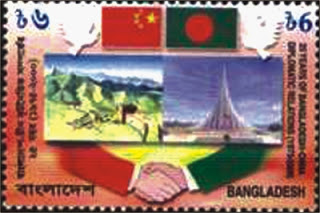 Upper Burma has seen a demographic shift resulting from the recent immigration of many Mainland Chinese to Mandalay Region, Shan, and Kachin States. Ethnic Chinese now constitute an estimated 30 to 40% of Mandalay's population.

Huge swaths of land in city centre left vacant by the fires were later purchased, mostly by the ethnic Chinese, many of whom were recent immigrants from Yunnan. The Chinese influx accelerated after the current military government came to power in 1988.

With the Burmese government turning a blind eye, many Chinese immigrants from Yunnan (and also from Sichuan) poured into Upper Burma in the 1990s, settling in Mandalay. In the 1990s alone, about 250,000 to 300,000 Yunnanese were estimated to have migrated to Mandalay. 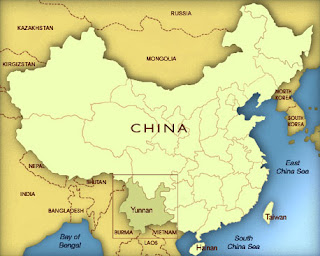 Their arrival has been vital in the doubling of Mandalay's population from about 500,000 in 1980 to one million in 2008. Chinese festivals are now firmly embedded in the city’s cultural calendar. The influx of Mainland Chinese into the city and the subsequent displacement of native Burmese to the outskirts of the city has created racial tensions.

Tensions between locals and the growing Chinese community in Myanmar are rising, as Beijing's influence in its southern neighbour expands. Some analysts are warning that widespread race riots - which broke out in the 1960s - could occur again.

People in Myanmar, particularly in the northern part of the country where the majority of Chinese immigrants have settled, are increasingly vocal in their criticism of the newcomers, as well as of China's policies towards their country.

Most of those moving to Myanmar from China are businesspeople in search of new markets, and bring with them their own workers from China. Locals complain that the Chinese businesses are of little benefit to them economically while the people make little or no attempt to integrate.

"The Chinese get rich whilst we get poor," said Soe San, who is from a small village on the Irrawaddy Delta, south of Bhamo. "All the opportunities are taken by them."

The widespread Sinophobia is aimed at the "New Chinese", recent immigrants from China, as opposed to the second and third generations of Sino-Myanmarese, who are well-integrated, speak Burmese and practise Buddhism - Myanmar's dominant religion.

"Recent migrants, mainly from the [south-western] Yunnan province, have little attachment to the country and keep their language and culture intact," said a Sino-Myanmarese analyst in Yangon, who spoke on condition of anonymity.

Exact numbers of Chinese immigrants to Myanmar are unknown - especially as acquiring Myanmar citizenship is a fairly simple process that many have undertaken. Estimates run anywhere between one to three million.

Whatever the true figure, Mandalay, Myanmar's second biggest city, is 30 per cent to 40 per cent Chinese, according to statistics from Global Witness, a London-based human-rights monitor; Lashio, the capital of Shan state, is dubbed "Chinatown", and Mandarin is the language of choice in Kachin state.

Denied permission to work in professional positions, many of the Chinese immigrants entered business with large firms bringing in Chinese workers. They dominate Myanmar's economy and have a disproportionately large presence in the country's higher education. Myanmarese industry is underdeveloped as China supplies cheap goods from Yunnan province.

Imports from China to Myanmar have reached unprecendented levels, rising in value from US$546 million (Dh2 billion) in 2000 to $2bn in 2008, according to the Internatonal Monetary Fund. The real value of exports is likely far higher given the considerable black market trade.

Underlying much of the tension between the Myanmarese and Chinese immigrants are Beijing's policies in Myanmar. Political support from Beijing, which has a veto in the United Nations Security Council, is seen as a major reason for the stability of Myanmar's junta, a source of resentment among many in Myanmar who long for democracy.

China is also pushing to extract more of Myanmar's resources, including hydropower, oil and gas. "The Burmese population believe that China's exploitations have caused environmental degradation and undermined Myanmar's democratic aspirations," said the analyst in Rangoon. 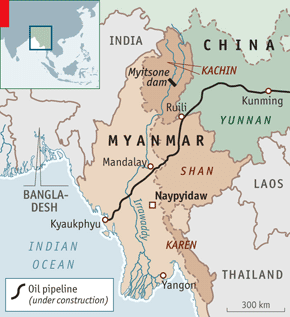 According to a 2008 report by Earth Rights International, there are at least 69 Chinese corporations investing in over 90 hydropower, mining, oil and natural gas projects in Myanmar.

Two Chinese pipelines running through Myanmar are due to go online within the next two years. One will bring oil from the Middle East, while the other will have the capacity to bring 12 billion cubic metres of Myanmarese gas to China every year.

Apart from concerns about the fact that Myanmar - where electricity is intermittent - is selling off gas it needs itself, critics accuse China of brutally exploiting both people and the environment in its quest for resources.

"Imagine your home has been bulldozed for a dam construction project, your farm, which is your livelihood, has been seized without compensation, and you and your family are forcibly relocated," said Ko Ko Thett, a commentator for The Irrawaddy, a Yangon-based daily.

"Then the Chinese immigrants come to work the land where your farm used to exist. This is the source of tensions." In the past two months there have been protests by villagers in Kachin against the Myitsone Dam being built by the state-owned Chinese Power Investments Company which is causing the relocation of up to 15,000 people.

In April unclaimed bomb blasts killed 300 Chinese workers. In addition, a conflict between the Myanmarese army and the Kokang, a largely Chinese minority, has intensified in the border region.

"Repressed anger against the New Chinese has been seething for years and could easily build up to a communal clash," said Ko Ko. "There is also potential for the destruction of Chinese projects as long as there are groups which can exploit the justifiable grievance of the local people who have been displaced by such projects."

Beijing and Dhaka should work together to essentially ensure a Burma under Chinese control but co-operative with Bangladesh and respecting Burma's Muslims and Christians.

We Bangladeshis and Chinese should also make this a win-win for everybody (except the racist Bamars) by making the Americans get a good healthy chunk of the Burmese pie including business deals, so that China, Bangladesh and America all benefit. Thailand is welcome to join the party too.

We Bangladeshis should start becoming regular tourists to China's Yunnan province and flood China's south-east with our hard earned currency. It's a win-win.  Bangladeshis see China's beautiful south-east. China gets richer with our money.

If tomorrow China's PLA crossed the border and invaded Burma and even annexed it, I for one would celebrate and regard it as much of a Bangladeshi victory as a Chinese one since;

a: We would have a border with our allies China (just as Pakistan does).
b: China unlike Burma does not burn churches, rape Christians, ethnically cleanse people and ban marriage for minorities (Muslim minorities in China are actually free from the one child rule).

Go PLA, please make Bangladesh happy and send the 1 million + PLA soldiers in to Burma to stop the killing of Christians, Muslims and ethnic Chinese.


Related posts at following links:
1411 Duel between Thameinbayan and Garmani
Naval Arms Race between Burma and Bangladesh
Posted by Hla Oo at 7:08 PM