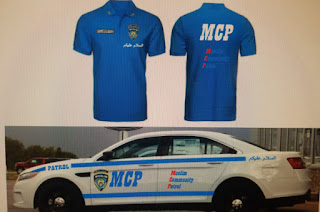 New York Muslims have a new security patrol group “MCP”: A car from the new Muslim Community Patrol has been spotted around the city, joining the Jewish enclave’s Shomrim and the Brooklyn Asian Safety Patrol among New York’s culture-specific security groups.

The white Ford Taurus bears insignia nearly identical to those of an NYPD patrol car — with blue horizontal stripes down the sides, a shield on the front driver’s side door and the words “Muslim Community Patrol” descending on the rear door, where a department vehicle would say “Courtesy Professionalism Respect.”

The vehicle was recently spotted cruising along Fifth Avenue in Brooklyn’s Bay Ridge, home to a burgeoning Muslim population. Calls to the Staten Island-based group — which, according to state records, was incorporated last month — went unanswered Sunday.

Some New York City residents were shocked last week to see vehicles with the words “Muslim Community Patrol” emblazoned on them cruising the streets like police squad cars. The sight of the vehicles immediately led to concerns about “creeping Sharia.”

These tweets reflect a belief among some Americans that the Muslim community wants to usurp America’s constitutionally based system of law and replace it with that of Sharia, a religious law derived from the religious precepts of the Islamic religion.

While these fears may sound outlandish, they stem from actual examples of Sharia being practiced in the United States. A perfect example of this occurred in 2010, when a federal judge appointed by former Democrat President Bill Clinton ruled that it was unconstitutional for Oklahoma to bar state courts from considering the application of Sharia law in their rulings.

Another example happened just last year, when a Minnesota Muslim man intent on imposing Sharia law in his local community reportedly began patrolling his neighborhood and confronting anyone who dared to violate Islam’s strict rules and dress codes. At the time local authorities received reports about a mob of Muslim men walking around with uniforms that read “Muslim Defense Force” and “Religious Police.”

According to the New York Post, there’s no reason for locals to fret over worries about “creeping Sharia.”

“A car from the new Muslim Community Patrol has been spotted around the city, joining the Jewish enclave’s Shomrim and the Brooklyn Asian Safety Patrol among New York’s culture-specific security groups,” the Post reported last week.

It turns out that other racial and religious groups in the 8.623 million people-strong city boast their own patrol groups. According to locals on social media, these groups lack the authority to stop and detain suspects. Instead, they function as nothing more than community watchmen.

Many communities across the states have their own security units. And since NYC communities are indeed often segregated, it’s not shocking to observe Jewish-, Asian- or Muslim-specific security groups patrolling their respective communities. 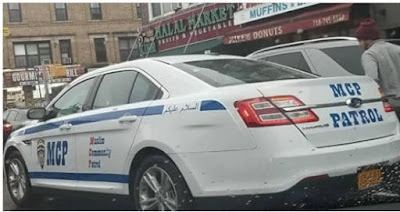