Burmese Prostitutes of Maesot across Myawaddy (1)

(This post is translation of news article from the Myanmar Express Group.)

“My parents couldn’t afford to send me to school anymore and the local broker from our ward was also very persuasive in offering a sweet deal for me to go work in Thailand they finally put me in the broker’s hands trustingly.

The broker, a human-trafficker, took care of all the expenses to get me here and the 150,000 kyats advance to my parents. Once I got here in Maesot I was sold straight to the brothel and now I am a whore.

Though I’d never anticipated to work as a prostitute before in my young life, right now I just thought of myself as sacrificing my life for my family back home,” sadly explained the 16-year old Burmese girl, now a prostitute in Maesot, but originally from the Burmese town of Pegu near Rangoon.

Countless number of young Burmese women and girls on the border land between Thailand and Burma are the hapless victims of savage economic crisis brought on by six decades of military dictatorship in Burma.

In Maesot region alone on the border there are thousands of Burmese young women and girls surviving as prostitutes. Majority have been here working willingly as prostitutes and supporting their desperate families back home in Burma, but many were also the victims of unscrupulous human traffickers. 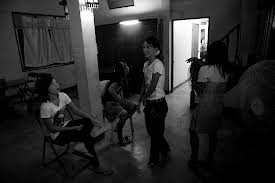 Since 20 years ago Maesot Town had had about thirty brothels with names like Darling, Ruby, Moustache, Power House, Nant-kyaing-phi, etc. But they all were Thai-owned and staffed by Thai prostitutes and a sprinkles of Burmese whores.

Even though there were a few Burmese prostitutes working in those Thai brothels there was not a single Burmese-owned brothel in Maesot till about ten years ago. Only then the prostitution business in Maesot began to take a distinctive shape as strictly Burmese business. 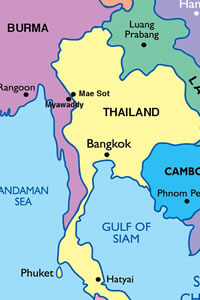 The whore business has become so Burmese even the local Thais started saying, whenever they are inviting their friend Thais from some other parts of Thailand, that if they ever visit Maesot they will be generously treated with Burmese girls as their Maesot is now known as the town filled with Burmese women and girls.

Thae Thae a young Burmese prostitute working in a prominent brothel in the middle of Maesot Town bitterly said, “People often said being a whore is easy job to make money here. They’re completely wrong as it is not easy at all. In our house customers pay 300 bahts for one fuck. Some other houses take only 200 bahts. Out of that we and the owner split 50:50.

From our measly share the owner cuts rent, food, electricity, water, and even the police money. Our life is basically hand to mouth, day to day survival. Since opening a brothel is illegal here we have to pay so many people to do our business.

And all these free fucks for local authorities and the Thai mafia. Police not just take free money from the houses they always fuck us for free whenever they want. The only difference between Thai Police here in Maesot and Burmese police in Myawaddy is language, their nasty habits are same.”


She continued on, “Whenever we have to go back Myawaddy for some family matters back home the Burmese police, immigration, people-militia, even the firemen, and other authorities  in Myawaddy immediately know who we are and give us trouble till they get what they want. Just to fuck us free.

In the middle of the day we have to open our legs wide in the police-gate for them Burmese policemen. Sometimes they even fuck us in the toilets. Now we have to carry plenty of condoms whenever we are to go back to Myawaddy. We have to protect ourselves from STDs and HIV-AIDS.

Here in Maesot the Thai police do not arrest us for whoring. But in Burma if we don’t give police what they want they arrest us and charge us as prostitute. We could end up in a prison. We are Burmese but Burmese police is worse than Thai police in screwing us, and they suck us dried.” 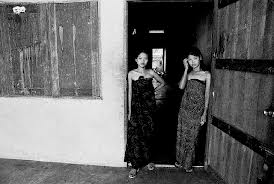 According to most young Burmese prostitutes, they came here looking for normal decent jobs but the situations forced them into the sex trade after struggling to find other jobs. They didn’t come here intentionally to become whores.

This was what 18 years old Ma Hnin Si (Rose – not her real name) said of how she was forced into her current profession.

“I’ve been doing this job for two years now. The broker woman told us that I could get a maid job in Bangkok paying at least 5,000 baht a month. My parents trusted her and let her take me. But I never get to Bangkok and end up here a whore.

When I first got here they never let me go out or see anyone else. Then one day they forced me to sleep with a rich Thai old man. I was a virgin then. I still do not know how much the pimps and broker got, but they sent 300,000 kyats to my parents back home.

Then my mother sent me a letter telling me that they’d received the money from me. And she also told me to work hard for the family. That letter almost drove me mad. Anyway, by then I just had to keep doing to keep everyone happy except myself.

Now all my family and the people from our little town know what I’m doing here in Maesot. No way I can go back home now. But I still send money back home whenever I can. For my future I’m now trying to get to a rich foreign country.

Some older Burmese women working before in our house are now living in America and Australia. They got contacts with foreign NGOs rescuing people like me and luckily they got sent overseas. They are now sending back home tons of money and their parents are becoming rich with houses and businesses.

That’s my dream too. To get contact with a woman NGO and go overseas starting a new life.”

But there are only few Burmese prostitutes who can send back home enough money as most are wasting their hard-earned cash spending on themselves and their loved ones as they go down deeper into their low lives working as whores in Maesot.

This was what a remarkably pretty Burmese prostitute who was well known in Maesot as she has some resemblance to the popular Burmese actress Thet Mon Myint said of her life in Maesot.

“After the whole night working we sleep for a while and then go to Maesot Bazzar to drink beer, smoke cigarettes, eat, and sing Karaoke just to be happy and relaxed. In addition to our earnings we get good tips from the customers. 100 bahts, 200 bahts. We spent that money next day on ourselves and our boyfriends.

We’re whores but we still have feelings and we still want to be loved by a man. All of us have own boyfriends. We work at night and during the days we go out with them and enjoy whatever lives we still have.

But my boyfriend owns me only at day. At night the brothel owns me. I have to buy him a motorbike and rent a flat to live decent like everybody else. I love him and if I don’t buy him stuff maybe he will leave me for some other girl.”

The Burmese woman owner of a popular karaoke shop in Maesot Bazzar said, “I keep on telling these girls to save money and to send back home some. But they wouldn’t listen and spent at days whatever they earned at nights. And their boyfriends, these Burmese boys are no good boys just sucking money out of these hard working girls.

The girls have to buy them everything. Watches, gold hand chains, neck chains, rings, and expensive motorbikes. The girls even pay for their rents. But the girls still have to fight to have own boyfriends. I’ve already seen too many times in my shop two girls screaming, kicking, scratching, and fighting for one boy they both love, incredible!”

This was what Ko Aung who works at a Guest House in Maesot bitterly said of the poor families of Burmese prostitutes working in Maesot.

We have to call for a Burmese girl if the guest wants one. And there she comes by a motorbike. All three together on the bike. Father, mother, and a child. Child is just over one. Father drives the bike. Mother is the prostitute. While mother is in the room with the guest the father and the child wait outside. Father giving bottled-milk to his child. When her business is over they all go back home on the bike, unbelievable!

I’ve seen mother and daughter working together in the same brothel here in Maesot. If I tell what is going on with our Burmese in this town, people wouldn’t believe me, unbelievable!”

Burmese Prostitutes of Maesot across Myawaddy (2)
Posted by Hla Oo at 2:14 PM