(This post is news articles from Asahi Shimbun newspaper and Eleven Media Group.)

North Korea tried to ship materials suitable for uranium enrichment or missile development to Myanmar via China last year, in violation of a U.N. Security Council resolution, The Asahi Shimbun has learned.

The shipment included about 50 metal pipes and 15 high-specification aluminium alloy bars, at least some of them offering the high strength needed in centrifuges for a nuclear weapons program. Japan seized the items aboard a cargo vessel docked at Tokyo Port on Aug. 22, a raid which took place at the request of the United States, sources told The Asahi Shimbun.

Authorities concluded that the shipment originated in North Korea because the bars were found to be inscribed "DPRK," although investigators were unable to confirm the origin from cargo documents or from the ship's crew, the sources said.

Advanced Aluminium Alloy Tubes and Bars Made in China

Japan, the United States and South Korea believe Myanmar has abandoned its one-time nuclear weapons ambitions. This makes officials suspect that the aluminium alloy may have been intended for use in building missiles instead. A South Korean government source said Myanmar may have been trying to develop short-range missiles in the event of border disputes with its neighbors.

The United States is among nations now easing sanctions against Myanmar and supporting its move toward democracy. On Nov. 19, Barack Obama, the first serving U.S. president to visit Myanmar, met with President Thein Sein in Yangon and requested that he sever military ties with North Korea.

The revelation of apparent continued links could hamper international reconciliation. And Pyongyang has complained of U.S. pressure on Myanmar to end relations. It will also likely cause international criticism of Myanmar and China, which have both denied violating the U.N. ban on North Korean exports of weapons and related materials. 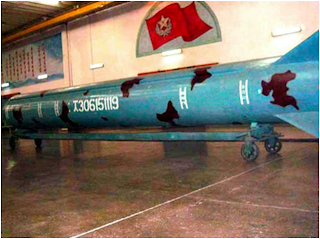 The cargo was to have been delivered to Soe Min Htike, a Yangon-based construction company, which the U.S. government believes is a front for Myanmar's military procurement. In an interview with The Asahi Shimbun, a company based in Dalian, China, confirmed that it had tried to send aluminium alloy to Myanmar.

"We became the cargo's owner at the request of a company," an official said. "We have learned that the cargo was seized, but we do not know why." Japanese government officials believe North Korea acquired the aluminium alloy from China. They said North Korea is unlikely to possess the technology needed to produce such material.

At a meeting held to discuss the matter, Japanese officials from several government agencies agreed that the Chinese military—which ultimately controls its defense industry—must have approved North Korea's exporting the materials to Myanmar.

The sources said the cargo was loaded onto the 17,138-ton Wan Hai 215, a Singapore-registered cargo vessel operated by a Taiwanese shipping company, in Dalian on July 27. On Aug. 9, the cargo was offloaded and placed aboard the 27,800-ton Wan Hai 313 in Shekou, China. On Aug. 14, the cargo was scheduled to change ships once again in Malaysia and to reach Yangon Port the following day.

The United States learned about the cargo's possible contents and asked the Taiwanese shipping company not to carry out the transshipment in Malaysia. The Wan Hai 313 entered Tokyo Port on Aug. 22. Officers from Tokyo Customs, the Ministry of Economy, Trade and Industry and other agencies examined the cargo and found the items in question.

For the first time, Japan applied a special measures law that allows the government to inspect cargo on ships suspected of carrying weapons and related materials to and from North Korea. Meanwhile, the discovery could force Japan, the United States and South Korea to review their nuclear non-proliferation policy.

A Japanese government source said since North Korea has no apparent difficulty procuring the necessary aluminium alloy it now likely "has acquired a large number of centrifuges." In November 2010, North Korea showed centrifuges to U.S. experts at a nuclear facility at Yongbyon. Officials claimed there were 2,000 centrifuges, enough to produce 40 kilograms of highly enriched uranium in one year, if certain conditions are met. That amount is sufficient for one or two nuclear bombs.

The U.S. and South Korean intelligence agencies suspect that North Korea is operating additional underground uranium enrichment facilities elsewhere. "North Korea would never disclose all its cards," one South Korean government source said. "There must be other facilities." 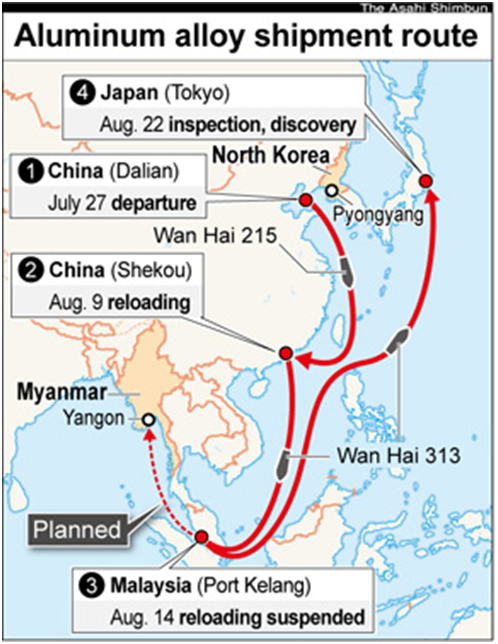 It is difficult to monitor the activities of centrifuges with an intelligence satellite because the site needed is small compared with the large reactor needed to produce plutonium for bombs. North Korea and Myanmar have had military ties for years.

Sources quoted Shwe Mann, speaker of Myanmar's lower house, as recently telling Japanese government officials that North Korea has yet to deliver some weapons ordered by Myanmar in the past. But, the speaker insisted, Myanmar would pursue no new weapons purchases from North Korea.

Shwe Mann's remark effectively contradicts Myanmar's official stance that it has not had any military transactions since spring 2011. The United States and South Korea learned that Myanmar signed contracts to purchase military supplies from North Korea when Shwe Mann visited the country in November 2008 as joint chief of staff. Among facilities Shwe Mann inspected was a North Korean missile factory.

In January last year, a ship arrived at Yangon Port via China, carrying cargo that had been loaded in Nampho, North Korea, ordered by an organization affiliated with the Myanmar military. "The cargo was a primary machine tool for weapons manufacture," said a diplomatic source in Yangon. "Military ties between Myanmar and North Korea have not been cut off."

North Korean military engineers have been spotted in Myanmar, as well as officials from a company that procures personal funds for the North Korean leader, Kim Jong Un. The U.S. and South Korean intelligence agencies have stationed personnel at airports and ports in Myanmar to monitor traffic, but North Koreans are apparently travelling by land through China, sources said.

Japan, the United States and South Korea have refrained from disclosing details about military ties between North Korea and Myanmar. "If we went public with that, we would thrust Myanmar closer to China and North Korea," said one Japanese government source.

Meanwhile, a Chinese government source criticized the approach of countries such as the United States toward Myanmar. "It does not contain only niceties, such as an evaluation of the pro-democracy movement," the source said. "This is a geopolitical confrontation between China and the United States." 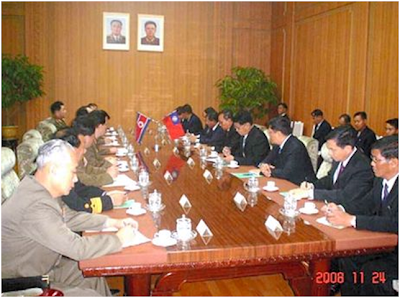 “Even if the Asahi Simbun’s article is true the cargo mentioned is only the business of the company involved. It has nothing to do with the Burmese Government,” denied Major Zaw Htay the outspoken Director of the Office of the President.

1. The newspaper Asahi Shimbun mentioned the incident had happened in last August but admitted the news was not officially released by the Japanese Government. Our president had recently met the Japanese Prime Minister during the Asean Summit in Cambodia and the bilateral relations between two countries are at its best.

2. Burma is a full-member of IAEA since 1957 its founding year and Burma has signed in December 1992 the Non-proliferation Treaty (NPT), in 1995 the Small Quantities Protocol (SQP) and the South East Asian Nuclear-weapon-free Zone Treaty, and in 1996 the Comprehensive Nuclear Test Ban Treaty.

3. As a member of United Nations Burma has strictly followed the UN Security Council Resolution No-1874.

4. In the recent past Burma had attempted to build a nuclear reactor but because of Burma’s lack of financial resources and technology, and also to avoid international suspicion president U Thein Sein’s government has completely abandoned that program.

And army sources have confirmed that Soe Min Htike, a Yangon-based construction company, now deregistered was one of the myriad of companies being used as the front for Burma’s illicit military procurement.

Myanmar’s military chief says the country plans to use nuclear technology for medical, research and energy purposes but will not develop atomic weapons, a statement that came a month after the government said it would declare any nuclear material in the country.

State media on Saturday reported the comments made by the armed forces commander at the graduation ceremony for the military’s Medical Academy.

“The military will not develop nuclear technology to produce weapons of mass destruction but will conduct studies and experiments for peaceful purposes in accordance with international standards to use in the medical sector, in laboratory research for science and in the electrical energy sector,” the Myanmar-language state-owned Myanma Ahlin reported.

Of course, Burma must have nuclear reactors

Following is reportedly a collective opinion of senior Burmese officers recently published on the blog of a retired army general whose name I should keep it as a secret as he desires.

“I don’t have much time so I don’t want to write a long post. And we Burmese are sort of people once the post is too long and too many facts involved they just don’t want to read. So I’ll just go to the points.

Our country is right between two giants China and India. Both have nuclear reactors. Both use their reactors for energy generation and also for nuclear weapons.

Then that fucking Bangladesh on the west, a small country with massive population, relying almost totally on nuclear energy. And they can switch to weapon production at anytime if they want a nuke.

Also Thailand on the east has plans to build nuclear reactors by 2025. And then Malaysia and Indonesia, who knows what they have and what their nuclear plans are?

Among those nuclear-nations our country still has so many remote places where people have never seen electricity. Even in Rangoon and Mandalay we have to ration electricity supply. Without reliable and cheap electric power the foreign investors ready and willing to come our country are not coming in, yet.

We have relied on hydro-electric power for too long. But it needs lots and lots of water. Coal power generators also can be built only for a specific region where coal is plenty. And coal is limited resource and one day all the coals will be gone, used up.

Okay, how about natural gas? But the gas is our main foreign exchange earner. If we use it to produce electricity we can’t export it. Also gas is a limited natural resource and one day it also will be used up.

Nuclear power! We should have nuclear reactors, in my opinion of course. Just two reactors, one in Upper Burma and one in Lower, will be more than enough for our whole electricity need. That is only energy use. How about military use? Once we have nuclear reactors running in Burma our potential enemies will think more than twice before confronting us with their F16 fighter jets and brand new naval frigates again.

Once we go ahead with our nuclear program everybody will criticize us but living under candle lights is worse than being criticized or even sanctioned by the international community.”