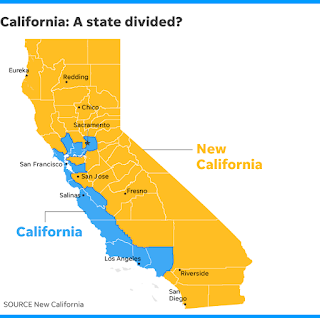 SACRAMENTO -- With the reading of their own version of a Declaration of Independence, founders of the state of New California took the first steps to what they hope will eventually lead to statehood. CBS Sacramento reports they don't want to leave the United States, just California.

"Well, it's been ungovernable for a long time. High taxes, education, you name it, and we're rated around 48th or 50th from a business climate and standpoint in California," said founder Robert Paul Preston. The state of New California would incorporate most of the state's rural counties, leaving the urban coastal counties to the current state of California.

"There's something wrong when you have a rural county such as this one, and you go down to Orange County which is mostly urban, and it has the same set of problems, and it happens because of how the state is being governed and taxed," Preston said.


But unlike other separation movements in the past, the state of New California wants to do things by the book, citing Article 4, Section 3 of the U.S. Constitution and working with the state legislature to get it done, similar to the way West Virginia was formed.

"Yes. We have to demonstrate that we can govern ourselves before we are allowed to govern," said founder Tom Reed. And despite obstacles, doubters, and obvious long odds, the group stands united in their statehood dream.

The group is organized with committees and a council of county representatives, but say it will take 10 to 18 months before they are ready to fully engage with the state legislature. This is not the first effort to split up California. In 2014, Silicon Valley venture capitalist Tim Draper submitted signatures to put a measure that would split California in six separate states. 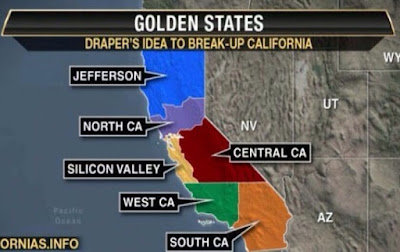 'New California' movement to divide the Golden State in half

Two men frustrated with what they call an "ungovernable" California have launched a new campaign to divide the rural areas of the state from its coastal cities.

Founders of the "New California" movement, Robert Paul Preston and Tom Reed, write on the campaign's website that California is "a failed state" and that "citizens of California are living under a tyrannical form of government that does not follow the California and U.S. Constitutions."

The campaign cites high taxes, and a decline in housing, health care, prisons, state parks, education, and "business climate," among other things, in both high-density and rural areas as reasons for a division.

"There's something wrong when you have a rural county such as this one, and you go down to Orange County which is mostly urban, and it has the same set of problems, and it happens because of how the state is being governed and taxed," Preston told CBS Sacramento.

Unlike other, similar campaigns, this is not a secession; rather, proponents of New California want to create a brand new economy with a new constitution via Article IV, Section 3 of the United States Constitution.

That section, which is related to statehood, dictates that no new state within an existing one already in the union may be created "without the consent of the legislatures of the states concerned as well as of the Congress."

The New California campaign most resembles the "Six Californias" initiative, which aimed to divide California into six regional states. That movement did not garner enough signatures to make it onto the 2016 ballot.

New California has little chance of succeeding, comparable to other campaigns to alter the makeup of California, but the group is nevertheless pushing forward and organizing meetings around the cause.


On Monday, the group released a "Declaration of Independence" calling for "a free and Independent State" with "full power to establish and maintain law and order, to promote general prosperity." According to CBS Sacramento, representatives for New California say it will be 10 to 18 months before they'll be ready to work with the current state's legislature.