US Federal Govt. Is Shutting Down Midnight Tonite

(Sabrina Siddiqui’s article from The GUARDIAN UK on 19 January 2018.) 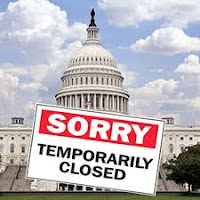 What is a federal government shutdown? If the US Congress fails to pass a spending bill by midnight on Friday many important government functions will come to a standstill.

The US Congress is scrambling to avert a shutdown of the federal government amid fraught negotiations over a budget compromise. Lawmakers have until midnight on Friday to pass a spending bill or risk the first government shutdown since 2013.

Funding was initially due to expire in October, but the passage of multiple temporary spending measures pushed the deadline to 19 January.


What is a government shutdown?

When the US Congress fails to pass appropriate funding for government operations and agencies, a shutdown is triggered. Most government services are frozen, barring those that are deemed “essential”, such as the work of the Department of Homeland Security and FBI.

During a shutdown, nearly 40% of the government workforce is placed on unpaid furlough and told not to work. Many, but not all, are non-defense federal employees. Active duty military personnel are not furloughed.

Why is the government poised to shut down?

Members of Congress are at an impasse over what should be included in a spending bill to keep the government open. Democrats have insisted any compromise must also include protections for the nearly 700,000 young, undocumented immigrants, known as Dreamers, who were brought to the US as children.

The Dreamers, who were granted temporary legal status under Barack Obama, were newly exposed to the threat of deportation when Donald Trump moved to rescind their protections in September. Trump and Republicans have argued immigration is a separate issue and can be dealt with at a later time. It remains unclear if Democrats have the votes, however, to force a shutdown over Dreamers. 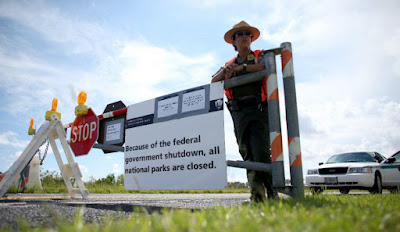 Who are the Dreamers?

Dreamers are young immigrants who would qualify for the Deferred Action for Childhood Arrival (Daca) program, enacted under Barack Obama in 2012. Most people in the program entered the US as children and have lived in the US for years “undocumented”. Daca gave them temporary protection from deportation and work permits.

Daca was only available to people younger than 31 on 15 June 2012, who arrived in the US before turning 16 and lived there continuously since June 2007. Most Dreamers are from Mexico, El Salvador, Guatemala and Honduras and the largest numbers live in California, Texas, Florida and New York. Donald Trump cancelled the program in September but has also said repeatedly he wants Congress to develop a program to “help” the population.

What will happen to the Dreamers?

Under the Trump administration, new applications under Daca will no longer be accepted. For those currently in the program, their legal status and other Daca-related permits (such as to work and attend college) will begin expiring in March 2018 – unless Congress passes legislation allowing a new channel for temporary or permanent legal immigration status – and Dreamers will all lose their status by March 2020.

Technically, as their statuses lapse they could be deported and sent back to countries many have no familiarity with. It is still unclear whether this would happen. Fear had been rising in the run-up to last week’s announcement. Those with work permits expiring between 5 September 2017 and 5 March 2018 will be allowed to apply for renewal by 5 October.

What does this week's ruling by Judge William Alsup mean?

In his ruling, Alsup ordered the Trump administration to restart the program, allowing Daca recipients who already qualify for the program to submit applications for renewal. However, he said the federal government did not have to process new applications from people who had not previously received protection under the program.

Legal experts and immigration advocates are advising Daca recipients not to file for renewal until the administration provides more information about how it intends to comply with the ruling.

“These next days and weeks are going to create a lot of confusion on the legal front,” said Marielena Hincapie, executive director of the National Immigration Law Center, which has filed a separate lawsuit against the Trump administration’s termination of Daca. 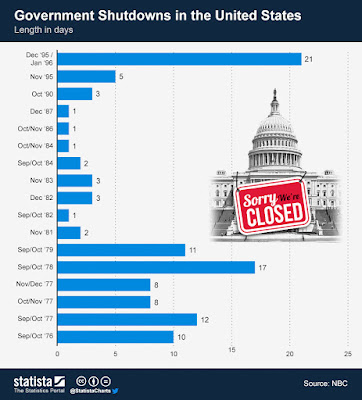 How common is a shutdown?

There have been 12 government shutdowns in the US since 1981, although ranging in duration. The longest occurred under Bill Clinton, lasting a total of 21 days from December 1995 to January 1996, when the then House speaker, Newt Gingrich, demanded sharp cuts to government programs such as Medicare, Medicaid and welfare.

The most recent shutdown transpired under Obama in 2013, pitting the president against the Republican-led House of Representatives. Republicans refused to support a spending bill that included funding for Obama’s healthcare law, resulting in a 16-day shutdown that at its peak affected 850,000 federal employees.

What would be the consequences of a shutdown?

A government shutdown would cost the US roughly $6.5bn a week, according to a report by S&P Global analysts released in December. The analysis, which based its numbers off previous shutdowns, also predicted potentially devastating ramifications for the economy.


Nearly 1 million people would not receive regular paychecks in the event of a shutdown. In previous shutdowns, furloughed employees have been paid retrospectively – but those payments have often been delayed. 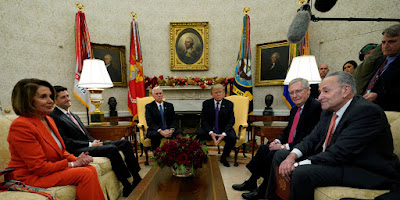