(Meira Svirsky’s article from The CLARION PROJECT on 25 January 2018.) 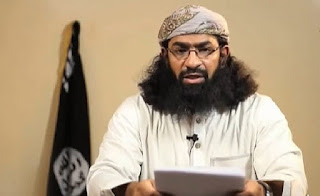 Al-Qaeda: Muslims Should Kill ‘Americans Everywhere’: A senior Al-Qaeda leader has called on all Muslims to “rise and attack the Jews and the Americans everywhere.”

In a video released this week, Khalid Batarfi, a top commander with the group’s  Yemen-based operation (Al-Qaeda in the Arabian Peninsula), said “killing them is one of the most important things.”

The response was ostensibly aimed at the decision by U.S. President Donald Trump’s to recognize Jerusalem as Israel’s capital. The next day, the State Department named Batarfi  a “Specially Designated Global Terrorist.”


According to State, “the designation seeks to deny Batarfi the resources he needs to plan and carry out further terrorist attacks. Among other consequences, all of Batarfi’s property and interests in property subject to U.S. jurisdiction are blocked, and U.S. persons are generally prohibited from engaging in any transactions with him.”

In April 2015, Batarfi broke free from the Central Prison of al-Mukalla in Yemen when AQAP militants attacked the prison.

Washington, DC (January 23, 2018): The Department of State has designated al-Qa’ida in the Arabian Peninsula (AQAP) leader Khalid Batarfi as a Specially Designated Global Terrorist (SDGT) under section 1(b) of Executive Order (E.O.) 13224.

E.O. 13224 imposes sanctions on foreign persons determined to have committed, or pose a significant risk of committing, acts of terrorism that threaten the security of U.S. nationals or the national security, foreign policy, or economy of the United States.

This designation seeks to deny Batarfi the resources he needs to plan and carry out further terrorist attacks. Among other consequences, all of Batarfi’s property and interests in property subject to U.S. jurisdiction are blocked, and U.S. persons are generally prohibited from engaging in any transactions with him.

Khalid Batarfi is a senior member in AQAP, a designated Foreign Terrorist Organization (FTO) and SDGT. Batarfi was the top commander for AQAP in Abyan Governate, Yemen, and was a former member of AQAP’s shura council. In April 2015, Batarfi was released from the Central Prison of al-Mukalla in Yemen when AQAP militants attacked the prison.

Today’s action notifies the U.S. public and the international community that Khalid Batarfi has committed or poses a significant risk of committing acts of terrorism. Terrorist designations expose and isolate organizations and individuals, and deny them access to the U.S. financial system. Moreover, designations can assist the law enforcement activities of U.S. agencies and other governments.

Who Is Khalid Batarfi?

Khalid Batarfi is a U.S.-designated Yemen-based senior regional member of al-Qaeda in the Arabian Peninsula (AQAP). He is reportedly a media specialist as well as a military commander who has planned terrorist attacks in Yemen. He was formerly AQAP’s emir (leader) of Abyan, a province in southeastern Yemen. Batarfi was also reportedly a former member of AQAP’s governing shura council.

Batarfi was born in 1979 in the Saudi city of Riyadh. After graduating from secondary school in Jeddah, he studied underneath several famous Islamist scholars, including al-Qaeda linked ideologue Abu Qatada. According to a resume released by AQAP, Batarfi traveled to Afghanistan in 1999 to train at al-Qaeda’s al-Farouq camp. In 2001, Batarfi fought alongside the Taliban against the Northern Alliance and U.S. forces. 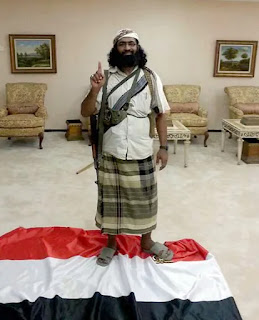 He escaped from al-Mukalla’s central prison on April 2, 2015, in the course of an AQAP raid. Soon after his escape, Batarfi trampled on the Yemeni flag in the evacuated provincial palace in al-Mukalla. He also took photographs, including “selfies,” of himself brandishing an AK-47 inside the palace.

Batarfi has appeared in several AQAP videos and other propaganda. In August 2015, AQAP released a video of Batarfi praising Chattanooga shooter Mohammad Youssef Abdulazeez and condemning “America, France, and other kufr nations.”

When AQAP’s ideological leader Nasser bin Ali al-Ansi was killed by a U.S. drone strike in April 2015, Batarfi officially announced his death.In June 2016, Batarfi issued a statement praising AQAP leader Nasir al-Wuhayshi after he was killed in a U.S. air strike that month. Batarfi threatened that al-Qaeda would target the U.S. economy, attack U.S. interests, and “destroy them.”


In June 2017, Batarfi condemned Saudi Arabia, Bahrain, the United Arab Emirates, and Egypt for severing ties with Qatar. Batarfi issued a statement of solidarity on behalf of AQAP after the four countries designated several Muslim Brotherhood and al-Qaeda-related individuals in Qatar. Batarfi condemned the terror list as a “war against Muslims” and called all Islamic scholars, preachers, and groups to support “jihad” against “the tyrants.”
Posted by Hla Oo at 9:02 PM