(Bloomberg article from The SYDNEY MORNING HERALD on 04 October 2017.)

The $49 billion National Broadband Network was meant to spearhead a digital revolution. Instead, the botched project risks becoming a poster child for government mismanagement. Australia's biggest-ever infrastructure investment has turned into a political football, plagued by cost overruns and construction delays.

With the network years behind the original schedule and only about half finished, Australia has slumped to 50th place on a global ladder of internet speeds, behind Kenya and a string of former Soviet bloc nations.

Public frustration with the project is boiling over amid mounting criticism that politics is trumping policy across a host of areas from housing to energy and damaging economic prospects. "We are really an example of how not to do it," said Paul Budde, a Sydney-based former adviser to the United Nations on the social and economic benefits of digital development. "We have ended up with the worst possible solution."


The network was conceived as a high-speed platform to increase economic output and beam state-of-the-art health and education services to remote corners of the country. The cost of failure is stark.

With a substandard internet backbone, it's tougher for workers to leave the major cities and ease pressure on house prices in Sydney and Melbourne. It becomes harder to boost productivity, which the RBA says must improve to avoid a decline in living standards.

Ian Martin, a telecommunications analyst at New Street Research in Melbourne, says the network will never generate enough revenue to recoup its cost and a writedown of between $20 billion and $30 billion -- about half the price of its construction -- is inevitable.

"It will never be a success financially, not in terms of ever getting the money back that's been spent on it," said Martin. "To do it as a nationalised government monopoly was clearly the wrong way to go."

Looking back at it, the NBN has become a story of state intervention, political ambition and a ballooning bill for taxpayers. It sparked a mixture of excitement and skepticism from the outset.

In 2009, the Rudd government pledged to weave almost every home and business into a fibre-optic network by 2017 at a cost of $43 billion, with bundles of glass threads transporting an explosion of digital information.

From the outset, some questioned the economics of using such technology in one of the world's most-sparsely populated countries. During a visit to Sydney in 2010, Mexican telecommunications billionaire Carlos Slim said the bill was too high for the number of homes the network would connect.

As the 2013 election loomed, the Liberal-National coalition attacked the project -- with its communications spokesman Malcolm Turnbull the chief critic. He proposed assorted technologies to drive down costs, including using existing copper wires to connect premises to a local hub or node, instead of bringing the more expensive fibre-optic cables all the way to a home.

Now, the blueprint he pledged to complete for $29.5 billion has boomeranged to plague Turnbull as prime minister. The bill has soared to between $47 billion and $51 billion and the network won't be complete until 2020, according to NBN Co., the state-owned company charged with rolling it out. 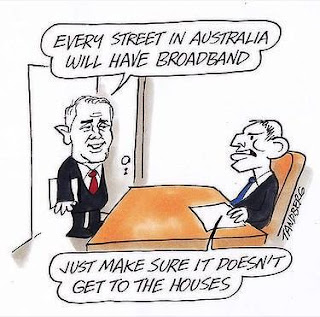 "The whole thing's been a political football from the start," said former Liberals leader John Hewson, now a professor at the Australian National University. "The governments are the masters of their own demise on the NBN."

The company is straight-jacketed by the government's insistence on a financial return from the network, even though as a wholesaler NBN Co. can't sell directly to the public and set the final price of a connection. NBN Co. says it's aiming to increase annual revenue more than five-fold to $5.4 billion and be cash flow positive in 2021.

While retailers have complained they're being charged too much to access the network, NBN Chief Executive Officer Bill Morrow has accused them of a "land grab" for customers while minimising capacity purchases. That's led to peak-hour crunches that have left many users complaining of dropouts when using streaming services such as Netflix. 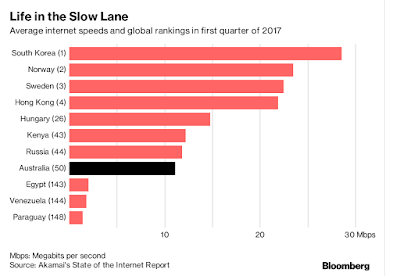 As customers switch over to the NBN, frustration with download speeds is boiling over, with complaints to the telecommunications ombudsman more than doubling to 7,512 in the second half of 2016 from a year earlier. NBN argues that complaints rose as more people connected to the network.

Exasperation at a lack of information, coverage holes, service dropouts and delays at being connected were common among the almost 200 public submissions to a 2017 parliamentary inquiry.

Among them is Louise Degeling, a retired bookkeeper who lives a little more than an hour's drive north of Sydney on the NSW Central Coast. NBN Co. told Degeling in February 2016 her home was ready to go. She's now been told she might have to wait until 2020.

"I jumped up and down, I screamed and yelled and got myself into an awful angst," said Degeling. "Whoever designed this piece of rubbish needs to be held to account." She has given up hope of getting on the NBN and is using a wireless broadband device instead.

To be sure, Morrow says NBN Co. will ultimately be "on the right side of history." As the former Vodafone executive released his latest business plan in August, he said the network was more than fast enough for most users and can be upgraded to meet demand for higher speeds.

Much of the public debate has centred on the choice of technology, pitting Labor's original fibre-to-the-home proposal versus Turnbull's fibre-to-the-node -- where about 40 per cent of homes will rely on copper for the final connection.

Budde says the copper network has such a short life expectancy that the government will have to spend billions of dollars next decade upgrading the wires to fibre. Good money after bad, says the telecommunications consultant, who has worked for governments including the US and Australia during a four-decade career.

Last week, the parliamentary inquiry's report into the NBN called for an independent audit of the project's business case and recommended that fibre be used where possible for the rest of the rollout.

Fibre internet connections in Asia outnumber any other high-speed alternative more than two to one, while developing nations are also skipping older technologies and opting for fibre, according to a UN agency.


"They're going to all sprout up and grow in Silicon Valley or across Asia and you literally won't even be able to access the services here, let alone start the companies that provide those services," said Barrie. 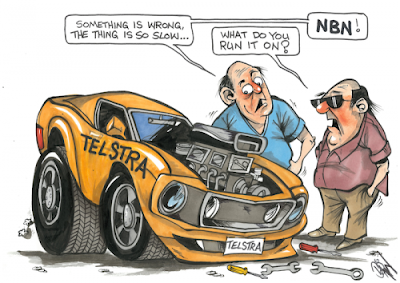