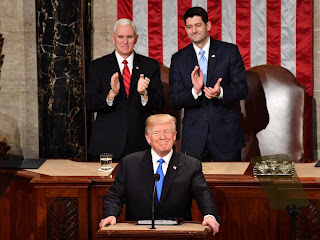 Trump's powerful State of the Union laid out 2018 vision: Prosperity, borders, security: The most remarkable aspect of President Donald Trump’s first State of the Union address is the very fact of his presidency. That he is one year into his term, and spent the first 15 minutes of his address regaling the American people with his successes just adds to the surrealism.

But the president has already exceeded GOP expectations, defied a near-pathological Democrat opposition, and is set to implement ambitious policies in the months ahead. This State of the Union was a celebration, and a mission statement.

Trump’s opening litany of economic accomplishments set the tone for the rest of the speech. Stock market highs, record low unemployment, repatriation of overseas cash, massive investment from multinational corporations in U.S.-based jobs — these are all objective and powerful indicators of what the president has been able to achieve thus far for the American people.


There’s nothing novel about a president taking more than his share of credit for a strong economy. With Trump, however, the recitation of positive facts and figures sounded like a full-throated refutation of his critics.  Much of the media warned that dysfunction and deterioration would characterize Trump’s first year in office. Instead, we have tremendous optimism in the markets, and tax reform that is good business as well as good politics.

Immigration was the policy core of the speech. The president defined his terms for a deal to legalize those covered under the Deferred Action for Childhood Arrivals (DACA). He reiterated his willingness to make concessions — some would even argue at the expense of his base — that would include limited amnesty, in exchange for changes to the legal immigration system, enhanced border enforcement, and a wall.

This led to one of Trump’s most memorable lines of the night: “Americans are dreamers too.” It was a brilliant turn of phrase, one that will remind all who hear it that the first priority of Trump’s Democrat opposition appears to be non-Americans. In contrast to this Pelosi-Schumer approach, Trump reiterated that his vision is for an immigration policy that is based on merit and respects the rule of law.

Many of the most memorable and powerful moments of the night were when Trump told the stories of honored guests in attendance. When the president spoke to the parents of two young women who were murdered by the vicious MS-13 gang in Long Island, N.Y., the costs of illegal alien violent offenders and the need to deport them took on a new urgency.

Trump also told the inspiring story of a North Korean defector named Ji Seong-Ho who lost both his legs as a child and now fights against the despotic Kim Jong Un regime from across the border in South Korea. When Ji raised his crutches and received a roar of applause from the assembled representatives of the American people, we were left with a visual testament to human resilience and our universal desire for freedom. 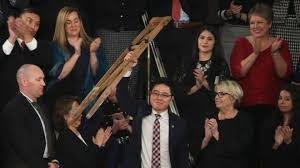 With the parents of Otto Warmbier, the University of Virginia student arrested and tortured to death by the North Korean regime, next to Ji, we were also reminded that America must stare down the evil Kim regime and hold it accountable for its past atrocities.

Overall, it worked. Trump gave a solid speech that established what the American people can expect in the year ahead. If he follows through on his promises, and keeps up his winning streak, the Trump agenda could well be defined by its convincing victories instead of its dynamic messenger.

(Buck Sexton is a political commentator, national security analyst and host of the nationally syndicated radio program “Buck Sexton with America Now.” He is a former CIA officer in the Counterterrorism Center, appears frequently on Fox News Channel and CNN and has been a guest radio show host for Rush Limbaugh, Glenn Beck and Sean Hannity. Follow Buck on Twitter @BuckSexton.) 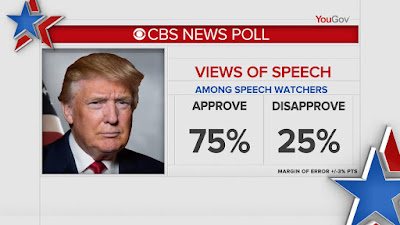 Poll: 75% Approve of Trump’s State of the Union Address

An “instant” poll of viewers who watched President Donald Trump’s State of the Union address on Tuesday night found that 75% approved of the speech, while only 25% disapproved — a 50-point margin in the president’s favor.

CBS News remarked: “Eight in 10 Americans who watched tonight felt that the president was trying to unite the country, rather than divide it.” The CBS News / YouGov poll may have been skewed somewhat by the fact that more Republicans watched the speech than Democrats.

However, Trump showed unusually high approval numbers even among Democrats who watched. The sharply positive result for a president whose overall approval rating generally hovers in the high 30s and low 40s suggests that the speech was a striking success.

Many pundits who are normally critical of the president were singing his praises. Frank Luntz, for example, was deeply moved — and mocked the Democratic response delivered by Rep. Joe Kennedy III (D-MA): From Twitter;

“Tonight, I owe Donald Trump an apology.  Tonight, I was moved and inspired.  Tonight, I have hope and faith in America again. It may go away tomorrow. But tonight, America is great again.  #SOTU” 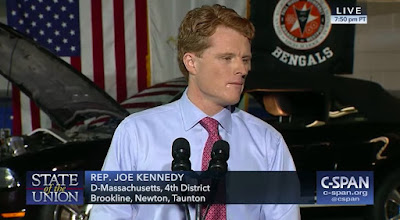 “Marco Rubio had dry-mouth during his #SOTU response in 2013. Joe Kennedy has drool-mouth.”


The poll was based on interviews with 1,178 respondents and had a 3.1% margin of error. A CNN poll showed a similar result, with 70% of viewers expressing a “positive” or “very positive” reaction to Trump’s speech.
Posted by Hla Oo at 6:12 PM