(Staff articles from The CLARION PROJECT on 19 February 2018.)

Compulsory Hijab Rampant in UK Schools: More than 150 schools in the UK require girls to wear hijabs, including schools that receive government funding.

Recent controversies surrounding the requirement include a school which required girls to wear face veils when outside and another school that banned girls under the age of eight from wearing hijabs only to have to renege on the policy after experiencing enormous (and abusive) backlash from parents.

According to the head of the UK governmental agency Ofsted (Office for Standards in Education), Amanda Spielman, “Ofsted inspectors are increasingly brought into contact with those who want to actively pervert the purpose of education. Under the pretext of religious belief, they use education institutions, legal and illegal, to narrow young people’s horizons, to isolate and segregate, and in the worst cases to indoctrinate impressionable minds with extremist ideology.


“Freedom of belief in the private sphere is paramount, but in our schools it is our responsibility to tackle those who actively undermine fundamental British values or equalities law.” Commenting on the current situation, the former head of Ofsted, Sir Michael Wilshaw said that the government is too politically correct to step in and do anything about the situation.

Wilshaw noted how the UK has changed, which he believes necessitates a policy decision made by the government on these matters. “When [principals] want to change things, they have now to take into account deep-seated and sincere feeling of communities, some of whom who have conservative views.”

The lack of an established policy unfairly leaves the principals “isolated and vulnerable,” he said. Spielman contends, “Rather than adopting a passive liberalism, that says ‘anything goes’ for fear of causing offense, school leaders should be promoting a muscular liberalism.

“It means not assuming that the most conservative voices in a particular faith speak for everyone — imagine if people thought the Christian Institute were the sole voice of Anglicanism. And it means schools must not be afraid to call out practices, whatever their justification, that limit young people’s experiences and learning.” 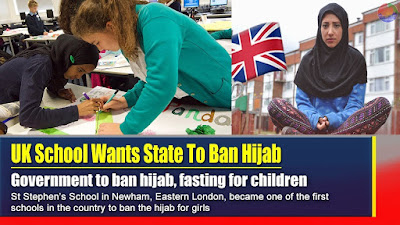 Head of governors calls for official Government guidance on issue: A top primary school has reportedly banned girls under eight from wearing the hijab. St Stephen’s, in the London borough of Newham, has also told parents their children should not fast during the school day in the month of Ramadan, The Sunday Times reported.

Its head of governors, Arif Qawi, had taken advice from clerics who said pupils should only fast once they reach puberty. Some at St Stephen’s had been doing so aged just eight or nine, he said.

Neena Lall, the St Stephen’s headteacher, told the Sunday Times the changes had been made to help integrate children into British society. Mr Qawi told the paper: “We are responsible for their health and safety if they pass out on campus. It is not fair to us.”

He called for official guidance on both fronts from the Department for Education. The school has not banned fasting outright but “encouraged” children to practise it outside school. St Stephen’s’ website lists “a plain, small, shoulder length slip on white headscarf” as optional for girls in Year 3 or above.

The school declined to comment further when contacted by The Independent. The Department for Education said: “It is a matter for individual schools to decide how to accommodate children observing Ramadan, and to set uniform policies. “We issue clear guidance on uniform and to help schools understand their legal duties under the Equality Act.” Ofsted lists St Stephen’s as “outstanding” overall. 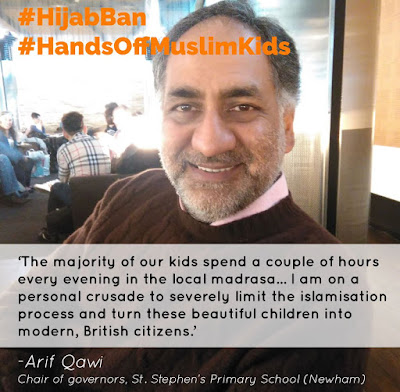 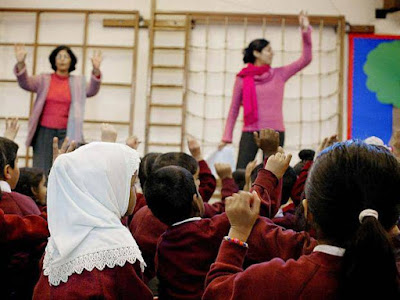 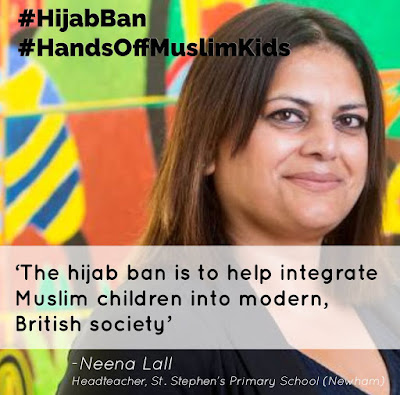 More than 19,000 backed petition for freedom to wear garment at the school: A top London primary school has reversed a controversial decision banning children under eight from wearing the hijab to school. The chair of governors who championed the ban stepped down from his role on Friday, as backlash against the decision grew.

St Stephen’s Primary School in Upton Park, Newham, faced sustained criticism over the decision to block girls from wearing the religious garment during the school day, to help Key Stage One girls “integrate”. The school also discussed curbing fasting among younger children at school during Ramadan.

More than 19,000 people signed a petition calling for the ban – which they described as an act of “oppression” – to be lifted. It demanded the school reverse its decision “so that individuality, personal choice, heritage, culture and expression remain free and unregulated within the education system”.

On Friday, the “outstanding”- rated establishment – which topped The Sunday Times league for the Top Sate Primary School in 2017 – posted a Uniform Policy Update on their website. “The school has taken the decision to make changes to this policy with immediate effect and this follows on from conversations with our school community,” it said. “We will work with our school community to continue to review this policy going forward in the best interests of our children.”

The school had previously posted a message saying it will “reverse” the decision, before amending it to the above, The Guardian reported.  A separate petition signed by more than 1,400 people called for Arif Qawi’s resignation from the board of governors for his “suggestions on Hijab and fasting bans”.

It also criticised a social media post in which Mr Qawi said he was trying to “limit the Islamisation process, and turn these beautiful children into modern, British citizens.” 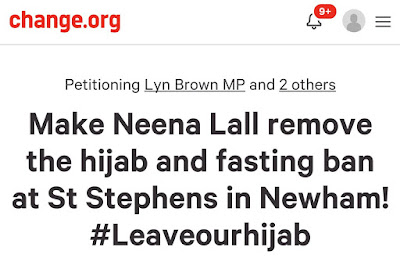 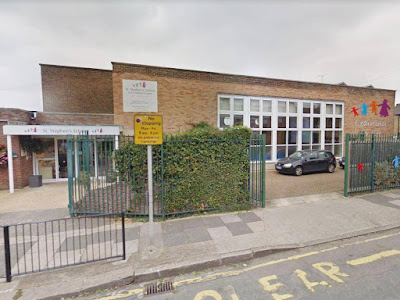 A former mayor is being investigated over claims he called a headmistress who banned the hijab an ‘evil racist’. Salim Mulla is accused of being part of a hate campaign that targeted St. Stephen Primary headmistress Neena Lall.

As part of attempts to help children integrate into British society, she banned the Islamic headscarf and fasting for pupils under eight at St Stephen’s Primary in Newham, East London.

But the school is said to have been bullied into reversing the move after it received ‘ridiculous oppression and intimidation’ in emails and online comments from around the country.

Mr Mulla, a serving Labour councillor in Blackburn – some 240 miles away – is accused of being part of a campaign that led to Miss Lall caving in and her chairman of governors resigning. In one Facebook post, he wrote: ‘Work needs to be done to get this evil woman out of school. She must go. She is racist bigot.’

Blackburn council’s leader Mohammed Khan said Mr Mulla’s behaviour was ‘not acceptable’ and the authority would ‘deal with him’. He confirmed the former mayor – whose Facebook profile picture shows him in civic regalia shaking hands with the Queen – would not run in this year’s local election.

Mr Mulla, who was mayor four years ago, was suspended by the Labour Party in 2016 over alleged anti-Semitic posts online. He was reinstated last year after being cleared by an investigation.

It follows revelations that Labour councillors who campaigned against the school ban have ties to the hardline Islamic group Muslim Engagement and Development (MEND), which claimed credit for the U-turn. MEND says its aim is to encourage Muslims to become more active in public life, but has been linked with speakers who have promoted jihad and homophobia.

Mr Mulla yesterday stood by his comments about Miss Lall, who is a Sikh. He said: ‘I think she was racist; she doesn’t understand the religion because she is not part of that religion. I spoke as an individual, I did not make the comment as a councillor or former mayor.’

He added: ‘I stand by the comment about the racist element, but I probably would retract that [calling Miss Lall evil].’ More than 20,000 people had signed an online petition against the move.

St Stephen’s, which is rated outstanding by Ofsted, reversed the ban last week. Miss Lall, 50, apologised to parents on Tuesday and chairman of governors Arif Qawi resigned. He has now accused the Government of leaving staff exposed to bullying from ‘extremists’ over the hijab ban.

Mr Qawi, 54, wrote to Education Secretary Damian Hinds: ‘I am flabbergasted why you and the Department for Education have stayed silent on this subject, rather than firmly enforcing the head’s decision. This lack of support, and weak attitude, will be very detrimental to the nation’s children.’ He added that staff felt ‘badly let down’ and agreed to resign ‘against every fibre in my body... if that would lay the matter to rest’.

A school insider said the ban was brought in because the hijab was ‘alienating’ young girls. But one mother said parents were angry because only one faith was targeted. The Labour Party refused to comment. The DfE said it had contacted the school over staff intimidation.

Narges Hosseini was arrested for protesting Iran’s compulsory hijab. She refused to appear in court to face charges punishable by up to 10 years, including 'encouraging immorality or prostitution.'

The president of Iran published a study conducted by the government indicating the waning support for the mandatory wearing of hijabs (head scarves) and chadors (long cloaks). The study – conducted by the Center for Strategic Studies, an arm of the president’s office — polled Iranians four times between 2006 and 2014.

According to the study, in 2006, 34 percent of Iranians indicated they disapproved of the government dictating what women could wear. By 2014, that number increased to 49 percent. Similarly, in 2006, 54 percent agreed that women should wear a chador, but in 2014, only 35 percent thought so.

Considering events in Iran in the past three years – and, particularly, in the last month of intense protests against the government – we can assume that the numbers are even more striking that the study indicates. Even without taking current events into account, we can also assume that the fact that the government conducted the survey most likely that the approval of mandatory hijab and chador wearing is in actuality much lower.

Yet the most surprising aspect about the study is the fact that it was released at all. The president’s office has been sitting on this data for three years. Yet, at the same time as women are being arrested by Iran’s religious police for anti-hijab protest (and those images are being broadcast around the world), President Hassan Rouhani decides to release the study.

Is this a political tactic to distance himself from the hardline establishment? Does he feel a political wind in the Islamic Republic indicating that the mullahs are not as much in charge as they would like to be? Or will the move backfire, taking him down as a symbol of the regime that seems to still be in comfortable control?

As noted by USA Today;

In December, Rouhani published the government’s budget in full, claiming it was in the name of transparency. The president ran as a reformer, and hoped that anger at his lack of real legislative change would be tempered by revelations about how much funding the government is obligated to pay religious institutions and some of their employees.

The move backfired and Iran erupted into protests against the political establishment as a whole, the likes of which hadn’t been seen since the aftermath of the country’s contested 2009 presidential election.

Meanwhile, while the U.S. State Department tweeted out their support of the people of Iran protesting against women being forced to wear hijabs, women around the world burned their hijabs in solidary with the protesting women in Iran.


Using the hashtag #NoHijabDay (as response to last week’s World Hijab Day), women who had been forced to wear hijabs growing up posted videos of themselves removing their hijabs and setting them on fire. 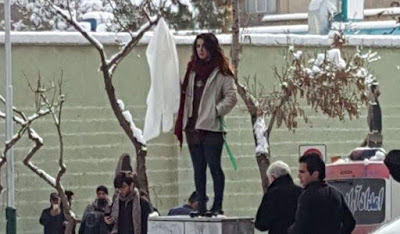 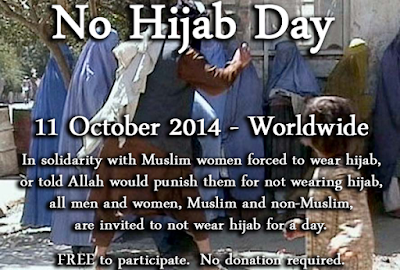 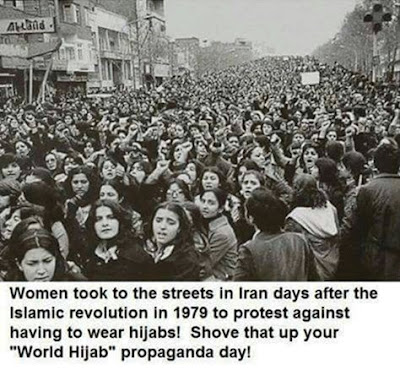