(Svenne Tvaerskaegg’s articles from The GATES OF VIENNA on 16 February 2018.) 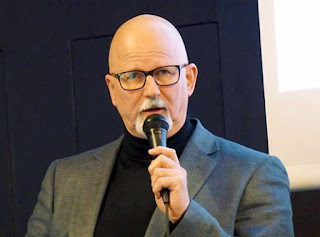 (Our Swedish correspondent Svenne Tvaerskaegg sends this report on Peter Springare, the whistle-blowing cop whose statements of fact about the results of Multiculturalism have prompted a new wave of repression by the Red-Green Swedish authorities.)

In 1975 the Swedish parliament decided the quiet, peaceful and culturally homogeneous Nordic country with one of the highest standards of living in the world wasn’t good enough as it was, and voted unanimously to transform Sweden into a multicultural society.

The borders were opened to massive immigration from some of the most backward and violent countries in the in the Middle East and North Africa. Over the following decades the immigrants began to arrive, a trickle at first but gradually accelerating to become a veritable tsunami today. And with the immigrants came alienation and crime.

Ghettos where Swedish law no longer applies formed round all the major cities. Middle Eastern and North African clans and criminal gangs rule in these lawless areas, and Swedish authorities enter at their own risk. Even the fire brigade and ambulance services answering emergency calls dare not enter without a heavy police escort.


In Stockholm police have said they are “on their knees” before the waves of muggings, assaults and rapes that are now spilling out from the ghettos and into ethnic Swedish areas, a development that is repeated in cities all over Sweden.

Between this criminal anarchy and what is left of ethnic Sweden stands the Swedish police force, undermanned, overstretched and under attack. And not only from the immigrant gangs who throw stones, bottles and even hand grenades at them: ordinary policemen and women on the ground have their own leadership arrayed against them too.

In the postmodern and ultra-politically correct Sweden of today, the dogmas of diversity and multiculturalism still rule amongst political, social and media elites, despite the very hard knocks they have been taking of late. It is impossible for anyone to advance in many professions unless they are considered “sound” and enthusiastically embrace postmodern doctrines.

Deviation from the official ideology of “värdegrunden”, translated as “basic values”, can even result in your getting fired from your job. The police force is not immune to the postmodernism that infects Swedish society and the pressure to keep quiet and conform.

This has lead to ever-increasing tension between the higher and career-minded administrative functionaries physically and ideologically isolated in their comfortable offices in the upscale areas of city centers far from the crime infested ghettos and ordinary police officers struggling on the front line.

Despite the risk to job and livelihood in speaking out, early last year one police officer in the city of Örebro broke the silence. Peter Springare is a preliminary investigator whose primary task is analyzing crime data, and as he carried out his daily duties he noticed one unsettling fact that stood glaringly out. In the overwhelming majority of crime reports that passed by his desk, the perpetrators had Middle Eastern and African names.

Even more worrying was the gross over-representation of those names in sexual crimes and crimes of violence. Despite the fact that people of Middle Eastern and North African origin were a minority in Örebro, they were committing by far most of the crime. Peter Springare took the radical and dangerous step of posting his findings on Facebook. 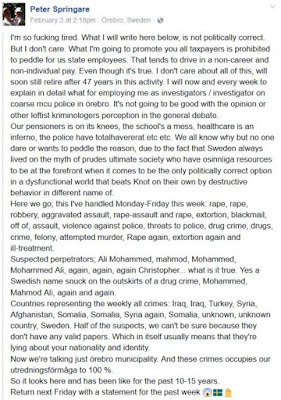 Immediately a storm broke out. Peter Springare’s Facebook page attracted thousands of comments supporting him, including many from policemen all over the country who said they were buckling under the load of fighting immigration-driven crime. Instead of taking his concerns seriously, the police leadership were horrified by this policeman’s breaking rank, and responded by trying to silence him.

They reported him to the public prosecutor for a suspected hate crime, but after due consideration the prosecutor’s office couldn’t find any legal grounds for a successful prosecution. The police leadership then tried to have him charged with committing a data-secrecy offense but the prosecutors couldn’t find any grounds for prosecuting that, either. Since then the authorities have been watching Peter Springer very closely, but they have not been able to stop him.

In February of this year Peter Springare gave a talk in the city of Gothenburg about the wave of gang rapes sweeping across Sweden. He said this type of crime was largely unknown in Sweden twelve to fifteen years ago and is a cultural phenomenon connected to the massive influx of immigrants from the Middle East and North Africa.

His talk was secretly filmed by the television channel TV4 and shown on the evening news. Another storm broke out, with more outpourings of support for Peter Springare as well as vilification from his enemies, and an increasingly worried police leadership reported him yet again to the public prosecutor for a suspected hate crime.

The brave policeman from Örebro has said this will not deter him and he will continue to speak out about the waves of immigration-driven violent crimes and sex-crimes sweeping over Sweden. 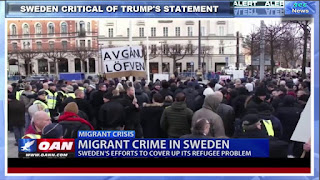 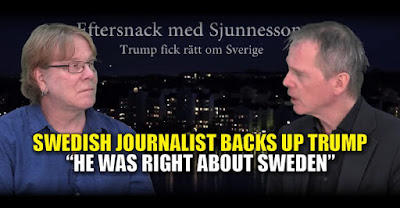 Growing numbers of ordinary Swedes are tired of the constantly rising crime and the slow transformation of their country into a cross between the Middle East and North Africa, and dissent is beginning to be heard with an ever-increasing volume and frequency in this traditionally conformist country.

The authorities are desperate to silence this dissent and regain control over the narrative before it spins too far out of control, and are taking measures to try to achieve this. The most worrying of these measures is a proposed law which would make it illegal to publish information that can damage Sweden’s reputation abroad.

Sweden has invested a large amount of money and effort over the years in building up an international image of the country as a “humanitarian superpower”, but this image has started to take some serious blows as information leaks out about what is happening inside that country.

Instead of being viewed as a model multicultural society and a glowing example for the world to follow, Sweden is increasingly coming to be seen as country in deep crisis and a warning to the world not to make the same mistakes.

The proposed new law, SOU 2017:70, would make it possible for journalists who publish information the government considers damaging to Sweden’s international reputation to be jailed for up to eight years, and the government hopes this new law will stem the flood of negative information now leaking out of the country.

Even Sweden’s compliant and house-trained mainstream journalists are worried by this proposed law, and it is meeting stiff opposition in the press. Despite this opposition the government is determined to push it through.

Years of propaganda and disinformation have kept the Swedish public soundly asleep about mass immigration and what it is doing to their country, but reality is becoming harder to ignore, and dissent is growing. The general election in September is going to be one of the most important in the history of Sweden, and people like Peter Springare are giving a voice as well as hope to those who want change.

Swedish police officer Peter Springare has been reported to police and will likely be investigated after he said the country’s gang rape problem is linked to migration and was a “cultural phenomenon”.

Springare, who gained global attention after blowing the whistle on the extent of migrant crime in Sweden last year commented on the issue of gang rapes earlier this month claiming such attacks were “new” and were a consequence of the last 10 to 15 years of immigration policy, Swedish newspaper Aftonbladet reports.

“There are also ethnic Swedes engaged in group violence, but not in the same numbers as foreign-born offenders,” Springare said. The comments, which were recorded by broadcaster TV4, have since been reported to Bergslagen police who have announced that an internal investigation will likely take place.

The communications manager for the police in Bergslagen confirmed that the report would be passed on to internal investigators and said that Springare’s comments could potentially harm public trust in the police.

Others were far more critical of the remarks with Secretary General of Sweden’s Law Society Anne Ramberg commenting: “It is remarkable. All civil servants and most policymakers must have better judgement and adhere to our form of government and the value base it expresses. These statements are almost racist.”

Last year, Springare blew the whistle on migrant crime claiming that almost all serious crimes were committed by migrants. Many at the time labelled Springare a racist for his remarks, to which he replied: “If you can’t discuss the problem of crime among immigrants without it being called racist propaganda, things are very bad.”

The accusations of racism went even further when police announced they would be investigating Springare for inciting racial hatred. The investigation was later dropped, but Springare was once again threatened with action as some claimed he had “hacked” into police computers to find statistics he used in a column for a local newspaper.


The levels of migrant crime are largely unknown in Sweden as the government has refused to publish official statistics for over a decade. Some websites that have published court data that shows whether a criminal is foreign-born, like the website Lexbase, have been censored by the government which claims the information should only be made available to lawyers, accredited journalists, and other professionals. 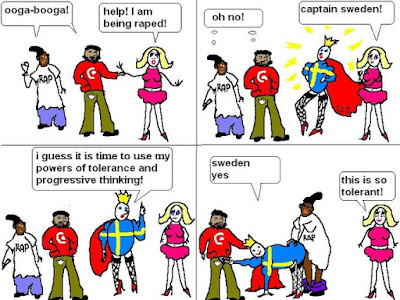