(William Worley’s article from The GUARDIAN UK on 12 December 2017.) 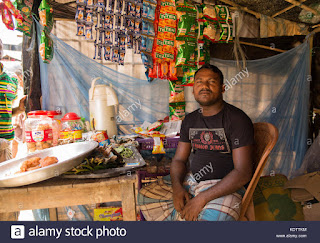 The traders cashing in on Rohingya misery: 'It's the best profit of my life': Entrepreneurial Bangladeshis in Cox’s Bazar are making more money than ever before thanks to the influx of desperate refugees from Myanmar.

Nurul Afsar is one of the many entrepreneurial Bangladeshis who is thriving as a result of the human crisis on his doorstep. “I am very happy,” says Afsar, 27. “Everyone is profiting, every car, every vehicle. I know a bamboo seller who makes twice what he used to.”

Afsar, from nearby Ukhiya, drives Rohingya refugees in and around Kutupalong refugee camp on his blue motorbike taxi. His income has more than doubled since the Rohingya refugee crisis began in August. More than 620,000 people have fled violence in Myanmar’s Rakhine state, arriving in the Cox’s Bazar district of southern Bangladesh. With them have come new economic opportunities.

In Kutupalong, the most populous camp, a bustling market area known as Lamba Chiya Bazar has sprung up in a matter of weeks. Stalls and shacks line the road, selling everything from food to clothing and electrical goods. And practically everywhere stocks betel nuts.

Abdul Shakkur, 35, runs an eatery nearby. He returned to his native Ukhiya with savings after eight years working as a labourer in Dubai, and set up his business almost two months ago. “Earlier there were no refugees, but then the market started and I thought it would be a good idea to sell food here,” he says.

But few Rohingya eat there – they are largely reliant on food aid. It is other Bangladeshi vendors who come for lunch. Shakkur paid 8,000 taka for the site, and now employs three staff, who receive 700 taka a day. He makes a daily profit of 1,000 to 1,500 taka, which is “enough to provide for my wife and parents”.

For the small number of Rohingya who run businesses, the picture is bleaker. Mir Kashim, 70, from Foira Bazar in Maungdaw township in Myanmar, has a stall with a dirt floor and homemade benches. For two months, he has sold tea, cigarettes, pulses and betel nut. “I brought some money from Myanmar, which I changed for 500 taka,” Kashim says. “Then we got a loan of 4,000 taka from our community to pay for the land. We are repaying it now.” 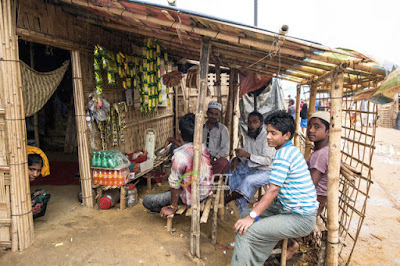 Every morning, Kashim buys goods on credit from wholesalers in Kutupalong and repays them in the evening. He also pays the landowner, a local government official who controls the area, 10 to 20 taka a day. Other Rohingya businesses do the same.

Kashim’s little shop makes between 200 and 300 taka a day, and supports five families. “We are just managing to get by,” he says. “There are some in the camp who don’t even make one taka.”

Other refugees have sold jewellery or received money from relatives abroad to start their businesses. As Rohingya refugees are not allowed to travel, they can only buy goods from wholesalers in the towns around which the camps are built. As a result, prices have increased.

Montudash estimates that 95% of his customers are refugees, who buy everything from pots to cables to soft drinks. “It was very quiet before the new influx,” he says.


The Rohingya entrepreneurs have to deal with extortive wholesalers and thugs from nearby villages who frequently threaten to destroy their shops. They have little choice. “We can’t do anything here – it’s like in Myanmar,” says Taher Udin, 18, from his shop, Lamba Chiya. “But if we didn’t have this business we would have to suffer like the others.” 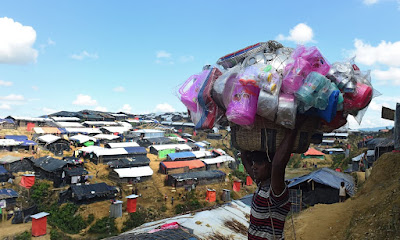