Riots In France: Trouble In Trappes

(Staff articles from The VOICE OF EUROPE & ECONOMIST on 15 February 2018.) 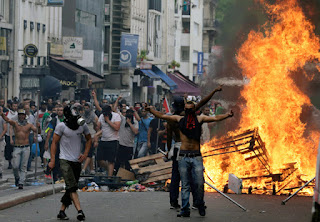 IT TOOK just two nights of rioting in a single town to set the whole of France on edge. On 19th and 20th July 2013 angry rioters torched cars and bus shelters and attacked a police station in Trappes, near Versailles.

This time the rioting was brought under control by the third night. But the French are keenly aware that a toxic mix of Islamism, joblessness and grievance can ignite copycat violence in the heavily immigrant banlieues.

In 2005 weeks of rioting and car burning spread across the country’s banlieues, or outer-city housing estates, after the accidental deaths of two youths. The protests ended only after the government imposed a state of emergency.

The trouble in Trappes began after the police conducted a routine identity check on a woman on July 18th, asking her to remove her face-covering veil as French law requires. According to the Versailles public prosecutor, after a scuffle things turned nasty and the woman’s husband tried to strangle a policeman.


The man concerned, a 21-year-old convert to Islam, later contested this on local television, insisting that he was only trying to defend his wife. He was promptly arrested, before being released pending a court appearance in September. The rioting started the evening after he was taken into custody, continuing for two hot nights during Ramadan.

Trappes is a poor place in a wealthy department (Yvelines), made up of market towns and neat commuter suburbs. With a big Muslim population, it has a history of hard-line Salafist Islam, which has been watched by French intelligence for years.

Yet Trappes is also the home town of three French celebrities: Nicolas Anelka, a footballer, and Jamel Debbouze and Omar Sy, two film stars. In recent years the town has benefited from increased government spending on tearing down tower blocks and rebuilding lower-rise housing. Police identity checks on women wearing the face-covering veil there have passed off without incident. 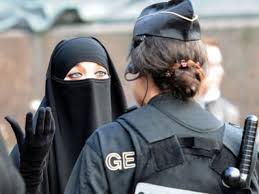 Manuel Valls, the tough-talking Socialist interior minister, was quick to defend France’s secular law against face-covering, commonly referred to as the burqa ban, which was introduced by the previous, centre-right government in 2010. The law, Mr Valls said this week, “must be enforced everywhere”, arguing that it is “in the interests of women” to protect them from those who try to impose other values.

Although outsiders may see the burqa ban as a constraint on freedom of expression, France’s belief in laïcité, a tough form of secularism born of its historical fight against authoritarian clericalism, enjoys cross-party support.

A ban on the wearing of all “ostentatious” religious symbols, such as the Muslim headscarf, in public schools was passed with Socialist support in 2004. Many French Muslim women approved of the burqa ban, on the grounds that the covering has no tradition in the northern African countries with historic ties to France, and had become a political statement, if not a tool, of those trying to impose hardline Islam.

In reality, very few women are thought to wear the burqa in France. In 2011 just 423 fully veiled women were stopped by the police, according to the Secularism Observatory, in a country that is home to 5m-6m Muslims. The application of the law itself was always going to be awkward.

The police are generally suspect in many of the banlieues and people resent identity checks, even if, like most of them, they are not wearing burqas. This time the anger erupted in Trappes and had an apparently religious trigger. But France has plenty of other banlieues that could become flashpoints next time round—and for reasons that reach far beyond Islam. 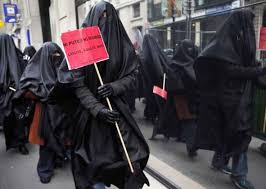 Trappes is a French town in Paris’s backyard. Although it is located in France it isn’t very French: There are no women in its cafes, the only bookstore is Islamic, and the town only has halal butchers.

The French town became known as an ISIS hotbed as 67 of its inhabitants joined ISIS in Syria. Two journalists, of the French newspaper Le Monde, did a one-year research in Trappes and came to some shocking conclusions. 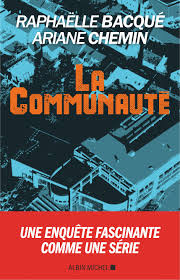 In the book they wrote about their experiences, they say Islamists are dominating the town and leftist politicians did nothing about it. The politicians betrayed the values and ideals of the republic to stay in power the book says.

It’s no coincidence the book is named “La communauté” (the parallel society), because the title represents what happened to Trappes. After the communists lost the elections and left an ideological gap, Islamists took power. Since then religion dictates everything in the town. There are now at least 1,500 prayer rooms and five mosques.

Modern day Trappes knows only halal butchers, shops are mostly North African, and its hamburger restaurant only serves halal meat. Even moderate Muslims are leaving the town to escape its strict religious rules.

Dr. Leslie Shaw, President of the Forum on Islamic Radicalism, says to Russia Today: “You couldn’t really consider Trappes as a traditional French town anymore. It’s a little bit like a state within a state.”


Ironically the book of the two journalists is not available in the town because the only bookstore is Islamic. It only sells Korans, biographies of Mohammed and Islamic garments.
Posted by Hla Oo at 7:41 PM