Sweden On Suicide Watch: Were Vikings No History?

(Svenne Tvaerskaegg’s article from The GATES OF VIENNA on 23 February 2018.) 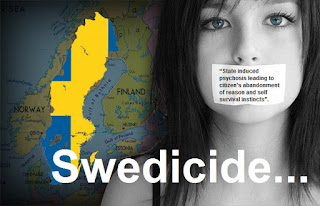 The history of Sweden stretches back over thousands of years. From petroglyphs dated at 5000 BC, through the Vikings and all the way to modern times, Sweden has woven a rich thread of history and culture through the ages.

During that time there have been many changes, but the biggest change of all is happening right now: the long history of Sweden is coming to an end. The Swedish parliament began the process when it unanimously voted to transform Sweden into a multicultural society and opened the floodgates to mass immigration, but the death blow was delivered by the Swedish government in 1998.

In that year a government motion was passed which abolished Swedish history. According to Regeringens Proposition 1997/98:16, p23:

“A country’s history often works as a connecting link between people. Because a large group of people have their origins in another country the Swedish people do not have a common history. A sense of belonging in contemporary Sweden and affirmation of societies fundamental values therefore has greater importance for integration than a common historical origin”


Since then the open denigration of Swedish history and culture and even denying such things exist have become fashionable amongst politicians, the media and trendy elites who want to signal their postmodern sophistication.

Every major event and holiday in Sweden — Christmas, Easter and Midsummer — is greeted with mocking newspaper articles and television programs informing Swedes that these traditional celebrations aren’t Swedish at all but foreign imports, and the cultureless Swedes don’t really have anything they can call their own.

According to Fredrik Reinfeldt, the previous prime minister of Sweden “The original Swedish identity was just barbarism, and since then all progress has come from the outside”

The woman who was to become the leader of the opposition Social Democrat party, Mona Sahlin, proved her postmodern credentials when she said to a group of immigrants “I’ve often been asked, but I don’t know what Swedish culture is. I think what makes many Swedes so jealous of you immigrants is you have a culture, an identity, a history, something that binds you together. And what do we have? We have Midsummer’s Eve festivities and ridiculous things like that.”

The present government of Sweden is working hard to prove Mona Sahlin right. The Swedish Minister of Culture and Democracy, Alice Bah Kuhnke, the daughter of an immigrant from Gambia, recently appointed the Pakistani immigrant Qaisar Mahmood as chief of Sweden’s Cultural Heritage Archive.

Qaisar Mahmood has said he has never studied archeology or culture, something which is hardly necessary, since part of his new job is overseeing the destruction of Sweden’s historical and cultural heritage.

The soil of Sweden is full of Viking artifacts, and building projects have often provided a rich source of objects for museums, but now many of the unearthed Viking artifacts have another destination. In the new, modern and multicultural Sweden, Viking amulets, bracelets and other historical objects are not considered worth preserving, so they are sent to metal reclamation centers and melted down as scrap.

Despite denying there are any such things as Swedish culture and traditions, Sweden’s postmodern elites have no problem at all declaring Ramadan a Swedish tradition. But it is probably only a matter of time before Ramadan is an established tradition in the place that once was Sweden.

In what might be considered a symbolic act, a mosque is to be built on the site of the Battle of Halmstad in 1676 where an invading Danish army was defeated and southern Sweden was saved from becoming a Danish province. The Danes are no longer a danger to Sweden, but Swedes don’t seem to understand that a culture with a very strong sense of its own identity is rapidly growing in their midst, and represents a much greater threat to Sweden than Denmark ever did.


This culture does not suffer from the same existential angst as the Swedes, and will happily take over when the self-doubting Swedes have lost the last vestiges of their own sense of identity. As if to herald the coming future of Sweden, the Muslim call to prayer will soon ring out across the town of Växjö, one more in the growing list of Swedish towns and cities where the Adhan is becoming part of daily life. 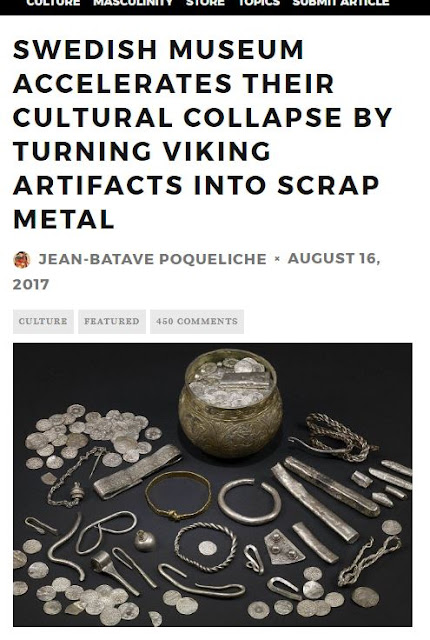 Sweden Continues With Its National Suicide

Qaisar Mahmood, who once rode his motorcycle around Sweden in an apparently failed attempt to discover what being Swedish consisted of, is using his position as head of the Swedish National Heritage Board not to highlight and celebrate that heritage, but to downplay Sweden’s cultural heritage and history, and to create a false narrative that will help compel Swedes to accept mass Muslim migration.

He says he doesn’t want simply to alert people to Viking artifacts and the like, but to use Sweden’s history to “create the narrative” that will make Muslim migrants “part of something.” 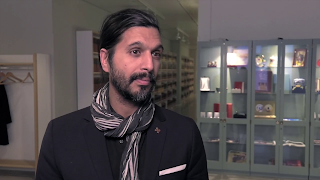 We have already seen how that works. Remember the fake news story about the Viking burial cloth bearing the word “Allah”? Last October, a Swedish researcher gained international headlines by claiming that burial costumes from Viking graves dating back to the ninth and tenth centuries had been found to be inscribed with the name “Allah.”

The intent of this was obvious: to convince Swedes that Islam had always been a part of Sweden, all the way back to the days of the Vikings, and so they should not be concerned about the mass Muslim migration that was now bringing Sweden unprecedented rape and other crime rates. Islam has always been a part of Sweden! Stop opposing mass Muslim migration!

The Viking burial cloths didn’t really feature the name “Allah” at all, as Stephennie Mulder, an associate professor of Medieval Islamic art and archaeology at the University of Texas at Austin, proved shortly thereafter, but by then the damage had been done. The idea had entered, however dimly, the popular consciousness: the Vikings were really Muslims. Islam is Swedish. Sweden was Islamic before it was Christian. The Muslim migrants are Swedes.

The “Allah” Viking burial cloth propaganda offensive was one manifestation of what Qaisar Mahmood and others like him are doing. There is no Muslim history in Sweden, but Qaisar Mahmood is working to change the very idea of cultural heritage and fabricate fictions about a historical Muslim presence in Sweden in order to advance his political and sociological agenda. 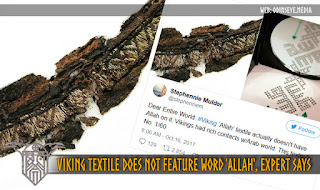 Qaisar Mahmood, as a Pakistani, of course has no Swedish heritage of his own. His admitted lack of knowledge of Swedish heritage and history ought to have disqualified him from his position, but this is how Sweden is obliterating itself and committing cultural and national suicide. After all, Swedes appointed Qaisar Mahmood to this position. It is Swedish leaders who want to destroy Swedish cultural and national identity.

It also must be remembered in connection with Qaisar Mahmood’s role as head of the Swedish National Heritage Board that the Qur’an suggests that ruins are a sign of Allah’s punishment of those who rejected his truth: “Many were the Ways of Life that have passed away before you: travel through the earth, and see what was the end of those who rejected Truth.” (3:137)

V. S. Naipaul encountered this attitude in his travels through Muslim countries. For many Muslims, he observed in Among the Believers, “The time before Islam is a time of blackness: that is part of Muslim theology. History has to serve theology.” Naipaul recounted that some Pakistani Muslims, far from valuing the nation’s renowned archaeological site at Mohenjo Daro, saw its ruins as a teaching opportunity for Islam, recommending that Qur’an 3:137 be posted there as a teaching tool.

It does lead one to ponder what Qaisar Mahmood might allow to be done, or not done, with Sweden’s historical sites and artifacts. But whatever destruction may ensue is, obviously, what Swedish authorities want.