(Staff articles from The DEFEND EUROPA & The BREITBART in February 2018.) 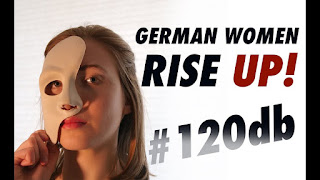 Maria Ladenburger, 19-yr-old German medical student, was raped & killed by a so-called Afghan “refugee” in October 2016. Her attacker was granted asylum as he entered Germany with no ID & claimed to be a child.

He lied. He was at least 28 according to his own father and he had already been sentenced to 10 yrs in Greece for rape and attempted murder but served just over one year only. Maria wasn’t the only one brutally violated by one of the Rapefugees. There are thousands of victims all over Europe thanks to Angela Merkel’s open door policy which brought in millions and millions of Muslim rapefugees into Europe just last few years.

The resistance begins! Young German women start the campaign "120 decibels". The campaign is directed against the imported migrants violence, against sexual harassment, abuse and rape of women in Germany.


A group of German women have launched a campaign called #120db to lend a voice to women who have been physically or sexually attacked as a result of mass migration policies. The group, which calls itself 120 Decibels after the sound intensity of rape alarms noe carried by many German women and girls, launched a video this week in which several members list the names of recent victims of violence committed by asylum seekers.

The women in the video reference the recent case of a young girl called Mia, who was stabbed to death by her former asylum seeker boyfriend in the German city of Kandel, as well as Maria Ladenburger, who was raped and killed allegedly by migrant who lied about being underage, and 11-year-old Ebba Akerlund, who was torn in half after being struck by a lorry during the Stockholm terror attack last year.

“They could be me and I could be them,” the women go on to say.”The offenders are everywhere. While jogging in the park, when we come home after work, while we wait for the bus, we are not secure because you are not securing us.” The women go on to blame mass migration, stating that the borders are not secure, that the authorities have no idea who is coming into the country, and “refuse to deport criminals”.

Migrant Rape Attacks Up 91 Per Cent in Bavaria This Year

The number of rape attacks in the German region of Bavaria has increased by 48 per cent, with the number attributable to migrants up by 91 per cent. The number of deportations in Germany decreased in 2017, despite promises from German Chancellor Angela Merkel in late 2016 to deport 100,000 failed asylum seekers.

“Because of your immigration policies, we are soon facing a majority of young men who come from archaic societies with no women’s rights,” one of the women states. The group then calls for the women of Europe to rise up against mass migration promising to take action and declaring that their #120db movement is the “real #MeToo”.

The hashtag elicited many responses on social media platform Twitter supporting the movement, but also some criticising it. One critic, obviously a black-refugee-loving Socialist woman from Germany, labelled the movement “ethnosexism”.

“#120db is not about sexualized violence, it is about ethnosexism. It is not about women's rights but about normalizing prejudices and hate against male refugees and black men.”

The movement is also linked to the hipster-right identitarian youth movement, which has been likened to a right-wing version of Greenpeace for their often spectacular protests. Last year, the group’s Defend Europe mission saw them raise well over a hundred thousand dollars to hire a ship to observe migrant transport NGOs off the coast of Libya. 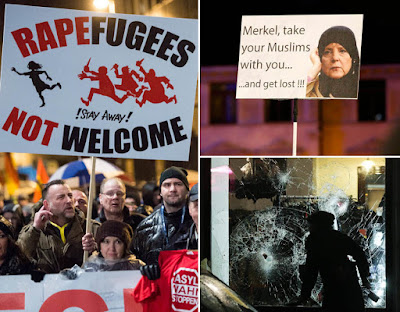 Women of Europe rise up against Fake "Refugees" & their Rape JIHAD

120 decibels  (#120db) is the name of their movement — after the sound intensity of rape alarms now carried by large numbers of European women.

German women are finally speaking up and their weapon is a new hashtag, #120dB. Just yesterday the project was launched on Twitter by @BeritFranziska and it’s already taking off. #120dB is a revolutionary project in which German women expose migrant violence, rapes, and links to terrorism.

During the video, the girls featured denounce the current state of Europe which is the direct consequence of years of betrayal from our governments. The girls use the terrible story of the abuses of Rotherham as an example of what European women have to endure while our politicians preach for tolerance and multiculturalism.

The video tells the story of the everyday woman who is scared of walking alone in a park, scared of jogging alone and always carrying pepper spray and wearing anti-rape pants (yes they are a thing sadly). These women deserve and must be protected, closing our borders is the first solution, as suggested in the video.

During the video the names Mia, Maria, and Ebba are constantly repeated, they are the names of just 3 of the thousands of victims to migrant violence, rapes, and terrorism. Names that we will never forget and we will always remind the politicians who caused this that their deaths are on their conscience. Ebba Åkerlund, 11, was killed as she walked home from school during the Stockholm terror attack


The video finishes with one of the protagonists saying that #120db is the true #metoo, strong words and a very important statement. Mainstream media and Hollywood pushed the #metoo hashtag which fastly became a witchhunt and feminist tool to demonise men, but #120db is a true cry for help, a true protest coming from women for women!