(This post details the ugly anti-Islamic and anti-Bengali race-riots in Arrakan triggered by a brutal rape and murder of a Burmese village-girl by three Bengali-Muslim men on May 28.)
Following news released on the June 5th New Light of Myanmar newspaper details the brutal rape and murder and sexual-mutilation of a Burmese village girl by three Bengali-Muslim men in the Ramree Township of the Arrakan State.
"NAY PYI TAW, 4 June- On her way from tailoring work to home, Ma Thida Htwe, 27, daughter of U Hla Tin, of Thabyechaung Village, Kyauknimaw Village-tract, Yanbye Township, was stabbed to dead by unidentified people at the mangrove near a rain tree beside the embankment road leading to Kyaukhtayan Ward of Kyauknimaw Village and Chaungwa Village at 5.15 pm on 28 May.
A complaint over the case was lodged to Kyauknimaw Police Station by U Win Maung, a brother of the victim. The police station opened the case under Section 302/382 (murder/robery) of Criminal Procedure Law. The head of Kyaukpyu District MPF and party went to Kyauknimaw Village on 29 May morning and reconstructed the related clues and interrogated three suspects, namely, Htet Htet (a) Rawshi, son of U Kyaw Thaung (Bengali/Islam), of Kyauknimaw (south ward), Rawphi, son of Sweyuktamauk (Bengali/Islam) of Kyauknimaw (Thaya ward) and Khochi, son of Akwechay (Bengali/ Islam), of Kyauknimaw (Thaya ward). 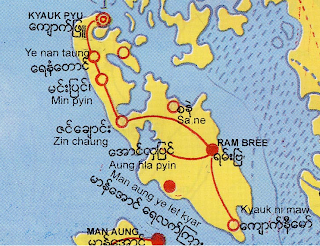 The investigation revealed that Htet Htet (a) Rawshi knew the daily routine of the victim who commuted between Thabyechaung Village and Kyauknimaw Village for tailoring. He, in badly need of money for marrying a girl, plotted to rob her of her valuables she wears. Together with Rawphi and Khochi, Rawshi waited at the rain tree near the scene. Seeing her returning home alone, the three pointed her with a knife and took her to the woods where they raped and stabbed her to dead, taking away five kinds of gold jewellery including MC gold chain.
In order to avoid racial riots and threat of villagers to the suspects, the Township Administrator and the head of the Township MPF were monitoring the situations and sent the three to Kyaukpyu Jail on at 10.15 am on 30 May. At 1.20 pm the same day, about 100 Rakhine nationals of Kyauknimaw arrived at Kyauknimaw Police Station and demanded to return the three to them who were explained by officials concerned that the three had already been sent to Kyaukpyu Jail.
However, the group, unsatisfied with it, was attempting to enter the police station which in return had to fire five shots to disperse them. At 1.50 pm the same day, about 100 Rakhine nationals of Kyauknimaw Village left for Yanbye and the Kyaukpyu District Deputy Commissioner and the head of Kyaukpyu Police Station also went to Yanbye to prevent disturbance and ensure prevalence of law and order settling the problems with the villagers.
At 4 pm on 30 May, the District/Township level departmental officials and Yanbye Township Pyithu Hluttaw representative U Ba Kyi made clarifications to avoid disturbance at Yanbye Township Administrator Office, and the villagers left the office at 5.40 pm. At 9 am on 31 May, they left Yanbye for Kyauknimaw Village with two boats. The Villagers accepted K 1 million donated for the village and K 600,000 for the victim’s funeral by the State Transportation Minister U Kyaw Khin and five sets of robes and K 100,000 by the State Hluttaw representative U Than Naing for the victim’s funeral.
At 3.5 pm on 31 May, the State Security and Border Affairs Minister, the deputy head of the State Police Station, the Kyaukphyu District Deputy Commissioner and the head of the District Police Station participated in the victim’s funeral and held discussions with the villagers. At 9 am on 1 June, the State Chief Minister and party left for Kyaukpyu and held discussions with the Kyaukpyu Township youth organization over the murder case. The discussions mainly touched upon handing down deterrent punishment on the murderers soonest and helping prevent riots when they are being brought to trial." 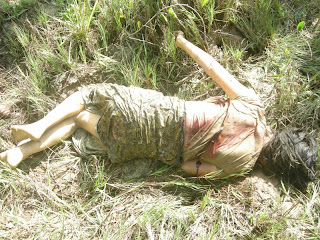 The news-release was clearly sanitized as the horrific details of the crime committed were not included. According to the police forensic evidence and also the eyewitnesses to the body of 25 year old Thida Htwe the victim was raped multiple times by three Bengali men and her throat slashed from ear to ear and her chest stabbed multiple times and her woman organ was stabbed and mutilated with knives. Even her both earlobes were cutoff by the attackers to take off her gold earrings.

Following day more than a thousand strong angry mob of native Arrakanese from the surrounding villages surrounded and almost destroyed the Kyauknimaw Village police station where the three criminals were temporarily held before sending them to safer Kyaukphyu Jail just before the mob’s arrival.
Killing of Traveling Bengali Muslims in Taung-goke
That case of brutal rape and murder has basically caused religious and racial riots against the Bengali Muslims all over the Arrakan State and the worst case was the killing of ten Bengali-Muslim pilgrims travelling on a luxury bus at Taunggup on their way from Sandoway to Rangoon on June 3rd.
Following news released on the June 5th New Light of Myanmar newspaper details the killing of ten Burmese Muslim men by the Arrakanese mob at the Taunggup Town in the Arrakan State.
"NAY PYI TAW, 4 June- In relation to the case of Ma Thida Htwe who was ruthlessly assaulted on 28 May, a group namely Wunthanu Rakkhita Association, Taunggup, handed out leaflets around 6 am yesterday to locals at crowded places in Taunggup, bearing a photo Ma Thida Htwe and describing a “Notice” making the people in Taunggup to take notice the intentionally assault of Muslims to Rakhinese women.
Around 4 pm yesterday, the news that Muslims were on board a car spread to the town and local people crowded the bus from the Yoma Thitsar Bus-line enroute from Thandwe to Yangon while it stopped in Ayeyeiknyein Bus Terminal as passengers embarked and disembarked.
An official of the terminal ordered the bus to leave for Yangon immediately as the bus was crowded. Some people riding motorbikes followed the bus and made the bus to turn back to the town. When the bus arrived at the junction of Thandwe- Taunggup on its way back to Thandwe, around 300 local people who were waiting there besiged the bus and pulled the Muslims out of the bus. In the clash, ten Muslims were killed and the bus were also destroyed. The crowd dispersed around 6.50 pm after Taunggup Township Administrative Board, Myanmar Police Force and Hluttaw Representative, members of War Veterans Organization and townselders arrived at the scene and controlled the situation.
The victims were on their way back to homes after staying in Thandwe for religious purposes. The victims include six from Taungdwingyi, two from Myaungmya and two from Thandwe. The bodies of the victims were buried in the Muslims Cemetery in Thandwe today. The attack is under investigation in conformity with the law and officials concerned and townselders are working together to maintain prevalence of community peace and stability.-MNA"
Following story and photos of that ugly incident were published on a Burmese language web site Khithit Blog on 5 June 2012.


(Photos are graphic and weak-hearted should not continue reading the rest.)
The luxury bus (7kha-7863) from Yoma-thitsar coach line was driven by Naung Naung (a Bengali-muslim) and left Sandoway at noon on 3 June 2012 and reached Taunggup at 5 in the evening.
On the bus were 5 Arrakanese and 7 Burmese and 10 Bengali-Muslims. While the bus was stopping for a short break at the bus-terminal in Taunggup the passengers got off and sat in the teashop there.
The ten Bengali-Muslims were noticed by the local Arrakanese youths who had been watching the buses for the purpose of stopping illegal entry of Bengalis from Bangaladesh across the porous border.
Those youths followed the bus by motorcycles once the bus had resumed its journey towards Rangoon. They stopped the bus at the Nayla-Thitsar Gate just outside Taunggup and forced the driver to return to Taunggup police station for the suspicion of transporting the illegal Bengalis.
But well before the Taunggup Police Station the hundreds strong Arrakanese mob waiting at the Sandoway Intersection in front of the No-1 Sate High School stopped the bus and forced all passengers and the driver to disembark.
The mob let the Arrakanese and Burmese passengers go but forced the Indian looking Bengali-Muslims into the road-side ditch and killed them by bashing them up repeatedly on their throats and heads with Bamboo sticks and timber truncheons. 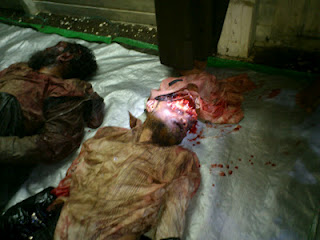 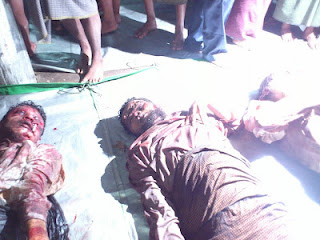 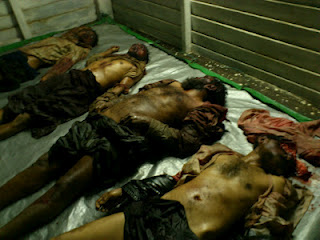 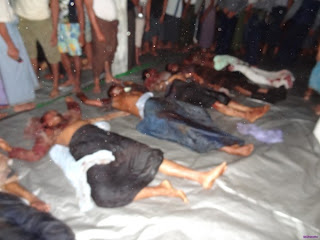 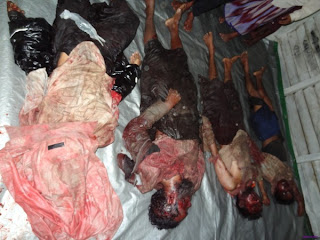 On June 5th in Rangoon Aung San Suu Kyi tired to defuse Sectarian strife by meeting the Muslim leaders in her NLD HQ office and also while speaking to the media in Yangon she expressed concern at the handling of the situation by local Rakhine authorities, in particular their failure to dampen anti-Muslim sentiment after the woman was raped and killed.

"If the very first problem was handled effectively and quickly, this flicker wouldn't have become a flame," she said.

(This video is the Myanmar TV broadcast of the recent incidents in the  Arrakan.)

(This video is the Burma VJ podcast of the Muslim protest near Sule Morse in Rangoon.) 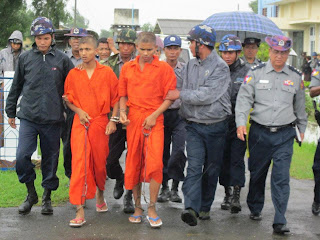