(This news article is direct from AFP/de ChannelNewsAsia.) 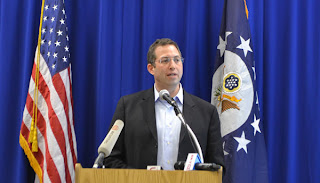 WASHINGTON: The US Senate on Friday confirmed President Barack Obama's nominee to be the first US ambassador to Myanmar in more than two decades, the latest step in greater engagement with a nation undergoing dramatic reforms.
Derek Mitchell, a veteran US policymaker on Asia, was confirmed by unanimous consent, capping a startling series of developments in recent months which saw the two nations normalise diplomatic relations following democratic reforms in the reclusive Southeast Asian nation.

In congratulating Mitchell, Senate Minority Leader Mitch McConnell said the diplomat "has done an excellent job in his current role as special representative and policy coordinator for Burma," the former name for Myanmar.

"His experience will serve us well in the region as he builds on the strong foundation established by (Charge d'Affaires) Michael Thurston and our embassy team in Rangoon."
The action comes on the same day Myanmar's pro-democracy champion Aung San Suu Kyi departed France to return home at the end of a landmark five-nation European tour in which she was lauded as a model of peaceful resistance to dictatorship.
Myanmar was for decades ruled by an iron-fisted junta.
Washington withdrew its ambassador to Myanmar after a crackdown on a democracy uprising in 1988 and elections won by Suu Kyi's democracy movement in 1990 that were never recognised by the junta.
But a reformist government under ex-general President Thein Sein has freed political prisoners and allowed Suu Kyi's party back into mainstream politics, as he initiated steps designed to break Myanmar's isolation.
The country held parliamentary by-elections in April, and Suu Kyi's National League for Democracy secured 43 of the 44 seats it contested.
"As an iron fist has unclenched in Burma, we have extended our hand, and are entering a new phase in our engagement on behalf of a more democratic and prosperous future for the Burmese people," Obama said in May when he named his new ambassador and announced an easing of investment sanctions.
Suu Kyi, now 67, is also cautiously optimistic, telling AFP in an interview Thursday that she is prepared to one day lead her country.
The Nobel peace laureate stressed that with Myanmar facing elections in 2015, which her party is set to contest, hard work cannot be postponed.
"It is now that is most important, and this is the message that I'm trying to get out to the world: that the next three years will decide what shape 2015 will take," Suu Kyi said.
The US decision to ease sanctions could usher in the first major trade and investment between the United States and Myanmar for years, and help pry open a backward economy left behind by speeding Southeast Asian development.
US law currently requires the president to restrict imports from Myanmar, where civilians backed by the military now rule, and bans US investment and export of financial services to the country.
At Mitchell's confirmation hearing Wednesday, senators pressed the Obama administration to allow investment by US energy companies as part of its loosening of sanctions on Myanmar, voicing fear that US companies would lose out to foreign competitors.
Human rights groups charge that the oil and gas industry fuels abuses inside Myanmar, with villagers allegedly forced into labour and the powerful military seizing the revenue to support its operations.
During his hearing, Mitchell said the administration had not made a decision on oil and gas investment in Myanmar but reiterated concerns about state-owned firms in the industry.
He testified that reform in Myanmar "is not irreversible" and raised concerns that "hundreds of political prisoners" remained locked up.
Posted by Hla Oo at 1:10 PM