NBN: The Aussie White Elephant Is The World Slowest?

(Staff articles from The AUSTRALIAN &  The CONVERSATION in June 2017.)

The white elephant NBN started life on a coaster on a plane: Kevin Rudd was a very busy prime minister. Weighed down by the ­affairs of state, even his most senior ministers found it hard to get an audience with him.

Once, Stephen Conroy, as broadband, communications and the digital economy minister, had to fly with him to Perth simply to meet. It was on board that VIP flight that Conroy, scribbling on a drinks coaster, persuaded the prime minister to support a proposal to spend $43 billion on a ­national broadband network. Talk about pie in the sky.

What followed, to much fanfare, was an announcement on April 7, 2009, that the Rudd government would establish a company to build and operate a “super-fast national broadband network”. This network would be built in partnership with the private sector. It would be “the single largest nation building infrastructure project in Australian history”.


Labor promised to “connect 90 per cent of Australian homes, schools and workplaces with broadband services, with speeds up to 100 megabits per second — 100 times faster than those currently used by many households and businesses”.

It undertook to “connect all other premises in Australia with next-generation wireless and satellite technologies that will be (sic) deliver broadband speeds of 12 megabits per second, (and) ­directly support up to 25,000 local jobs every year, on average, over the eight-year life of the project”. Every house, school and business in Australia would have access to affordable fast broadband.

The government planned to be the majority shareholder, but it said “significant private sector invest (sic) in the company is anticipated”. It also signalled its intention to “sell down its interest in the company within five years after the network is built and fully operational”.

Fast forward to mid-2016. With around nine months of the projected eight years to run, instead of 25,000 jobs, 8000 people are employed directly or as subcontractors. Just more than 1.1 million connections, a tiny fraction of the 90 per cent of homes, schools and workplaces, promised, have been made. Of those, only 15 per cent opted for the top speed of 100Mbps. A third took the slowest speed of 12Mbps.

Concerned by the NBN’s shortcomings, the Coalition government in 2013 called for a rushed strategic review. It exposed inefficiencies and warned of delays and huge cost blowouts, requiring peak funding of up to $73.6bn.

Malcolm Turnbull, then communications minister, described Labor’s “super-fast broadband network” as an “utterly failed gigantic infrastructure project”. He recommended the model be fundamentally changed from fibre-to-the-premises, to a multi-technology-mix network based on copper. It was a fateful decision rooted in politics. 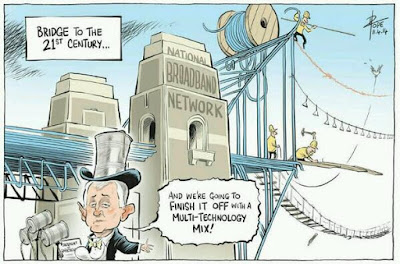 Instead, he went for immediate popularity by promoting a dubiously cheaper, faster rollout. Poorly executed though Labor’s plan may have been, Turnbull’s decision has saddled Australia with a second-rate network, incapable of competing with faster fibre and wireless speeds. Its relative inadequacy will become increasingly obvious across time.

For example, Verizon, a large US wireless carrier, using fixed wireless technology, is planning a 10Gbps service, 10 times the NBN’s maximum. It is expected this service will be in operation by 2020, creating headaches for multi-technology operators.

NBN Co chief executive Bill Morrow aims to complete Turnbull’s rollout by 2020 and expects 80 per cent of active users will go for 25Mbps or less. Little wonder. Although the company can offer up to a gigabit per second, pricing disincentives mean few are likely to take up the offer, especially as the government plans to introduce a levy on the telco industry to meet rollout costs in the bush. A smaller wholesale market than planned is likely to result.

These realities pose important questions for the Auditor-General. For how much longer can NBN Co’s debts be quarantined from the national accounts? It may be convenient for the commonwealth, given its shaky budget position and standing with the credit rating agencies, to treat NBN expenditure as an investment.

For this reason it may even justify its refusal to guarantee NBN’s debts, which add $110 million a year to the company’s interest bill. But with more than $8bn of losses and counting, and with commercial prospects for the project now so undeniably dim, for ­accounting integrity, the government must consolidate the company’s debts into the national accounts.

NBN Co’s founding chief executive, Mike Quigley, is certainly concerned for the company’s future. He believes not only has Turnbull’s faith in the copper network complicated the rollout, it is an investment in backward-looking technology that is “shortsighted and expensive”. The use of copper cable has robbed the network of the flexibility of fibre.

Where the need for speed is critical, NBN faces increased competition and early obsolescence. It is the most expensive network in the developed world, and private investment may be impossible to find. The NBN has been a political plaything from the start.

Turnbull’s multi-technology mixed solution may have been politically expedient but he has forgone the opportunity to invest in a competitive, leading edge, future-proofed communications system. It is neither agile nor innovative. Sadly, history will record the NBN as yet another poorly conceived, badly executed, overpriced, taxpayer-funded white elephant.

It will join that pantheon of failed government initiatives such as mothballed desalination plants, renewable energy projects and rapidly obsolete submarines — painful reminders of valuable resources and scarce capital squandered in the name of conceit and political expediency.

When will politicians realise the limitations of government? Perhaps only when drinks coasters are banned from VIP flights and parliamentary offices.

(Blogger’s Notes: As usual the Socialists started an expensive government monopoly on Internet Infrastructure without realising it wouldn’t work and when the conservatives control the government they screw it so bad now we have the slow-shitting white elephant roaming every house horribly slowing our internet connection down. Even slower than my former shithole country Burma.)
The NBN: how a national infrastructure dream fell short

Eight years into the Australian government’s National Broadband Network (NBN) project, the nation has an average internet speed – 50th in the global rankings – that lags well behind many advanced economy countries.

Ongoing secrecy around the NBN, a project that’s likely to cost more than A$50 billion, makes it impossible for the public in most cases to know when and what quality service they will receive. Further, new research shows the NBN rollout was politically motivated and socioeconomically biased from the beginning.

It is perhaps time to remind ourselves of the ups and downs of the project that was once announced as a dream national infrastructure project for the 21st century. This requires a ten-year journey back in time, before we can figure out what needs to be done next.

In November 2007, after 11 years of Coalition government, Labor was elected on a policy platform that promised a national broadband network.

The NBN company was announced in April 2009 to provide terrestrial fibre network coverage for 93% of Australian premises by the end of 2020. Fixed wireless and satellite coverage would serve the remaining 7%.

Looking back, it’s hard to deny the influence the NBN has had on Australian politics. Perhaps the peak influence was when three independent MPs cited the NBN as one of the key reasons why they supported a Labor government over the Coalition when the 2010 federal election produced a hung parliament.

The final 60 early NBN rollout locations were then announced. The plan was for the first stage of the large-scale rollout to follow, connecting 3.5 million premises in 1,500 communities by mid-2015.

This dissatisfaction and the September 2013 federal election result changed the fate of the NBN. In 2013, the new Coalition government suspended the first stage of the large-scale fibre-to-premises NBN rollout to reassess the scale of the project.

In 2014, the government announced that the NBN rollout would change from a primarily fibre-to-premises model to a multi-technology-mix model. The technology to be used would be determined on an area-by-area basis.

This change of direction resulted in a prolonged state of uncertainty at the local government level. As it was rolled out, the NBN was widely criticised for being slow, expensive and obsolete.

Delays continue in the construction of the Coalition’s NBN. What can only be described as a downgrade of the original national project is now seriously over budget. In September 2016, a joint standing committee of parliament was established to inquire into the NBN rollout. The inquiry is continuing.

The bleak status quo only gets worse when the on-the-ground reality of the NBN rollout is considered. While fibre-to-premises rollout is supposed to be limited in the Coalition’s NBN, disturbing examples of misconduct in the NBN installations are highly concerning.

The image below shows one example of many in which heritage-listed buildings (in this case also public housing) are disrespected to the point that suggests an absolute lack of communication between NBN contractors, local government, or heritage agencies. 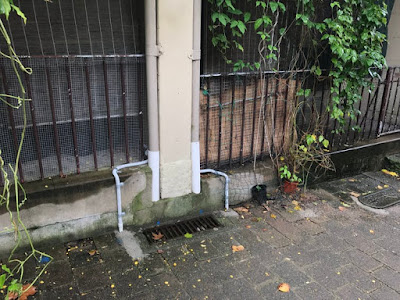 In the Coalition’s NBN, the provision of universal high-speed capacity – as envisioned in the original NBN – has been transformed into a patchwork of final speeds and different quality of service. This leads to an important question about equity. It also puts the 60 early rollout locations in the spotlight as these could potentially be the only ones across the nation that enjoy fibre-to-premises NBN.

My new research points to the political motivations in the selection of these lucky 60 sites. Voting patterns in these locations were compared with all electorates in the federal elections from 2007 to 2013. The analysis shows the selections were skewed for potential political gain.

ALP-held seats were the main beneficiaries of the early NBN rollout; safe Coalition-held seats were the least likely to receive the infrastructure. Tony Windsor, one of the three influential independent MPs in 2010, famously said of the NBN: Do it once, do it right, and do it with fibre.

He secured priority access for his regional electorate to the early NBN. However, most regional localities were not that lucky. Indeed, research on the sociospatial distribution of the early NBN rollout shows the limited share of regional Australia.

It is convenient to blame one political party for the state of chaos that the NBN is in right now. However, politicisation of the project has been part of the problem since day one. Instead, we call for telecommunication infrastructure to be considered for what it really is: the backbone of the fast-growing digital economy; the foundation for innovation in the age of smart cities and big data; and a key pillar of social equity and spatial justice.


Policing the leaks of NBN data is not going to clean up the mess. Quite the opposite: the Australian government needs to share the NBN data, so the exact nature and scale of the problems can be determined. Only then can we talk about finding a way forward in this long journey. 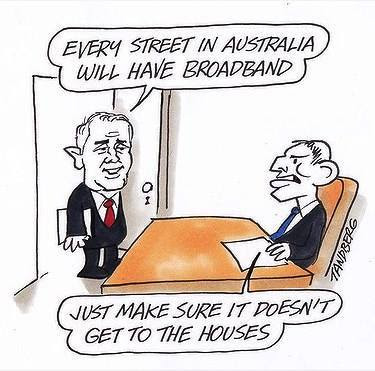