Turkey Attacks Kurds In Syria Despite US Warnings

(Selcan Hacaoglu’s article from The BLOOMBERG VIEW on 22 January 2018.) 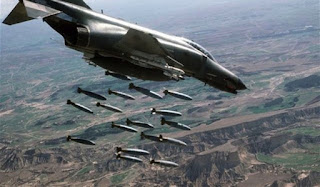 Turkey pushed ahead with a ground offensive against Kurdish forces in northwest Syria -- in defiance of the U.S. -- to create what it called a security buffer along the border.


“The Turkish operation against Afrin not only opens a new front in Syria’s nearly seven-year-old war but is set to further strain the Ankara government’s increasingly fraught relationship with Washington,” Wolfango Piccoli, co-founder of Teneo Intelligence in London, said in an emailed note.

The U.S. is “very concerned” about the situation in northwest Syria, State Department spokeswoman Heather Nauert said in a statement. “We urge Turkey to show restraint and ensure its military operations remain limited in scope and duration and scrupulous to avoid civilian casualties.”

Turkey says it is invoking self-defense under international law, assuring Syria that the offensive was solely targeting “terrorists” and that its forces would pull out after meeting its goals.

French Foreign Minister Foreign Minister Jean-Yves Le Drian called for an emergency United Nations Security Council meeting, drawing a rebuke from his Turkish counterpart Mevlut Cavusoglu on the grounds that such a move would amount to supporting for terrorism.

“We are determinedly taking steps against the terrorist organization and we will continue,” Turkish President Recep Tayyip Erdogan said in a speech in the western city of Bursa on Sunday. “It is out of the question to make concessions on this.”

Five rockets believed to be fired by YPG forces from Syria exploded in the Turkish border town of Reyhanli, killing one person and wounding 32, local media said.

Turkey has been outraged by plans to include thousands of Kurdish fighters in a border security force being created by the U.S.-led coalition against Islamic State. Territory won during Syria’s civil war has allowed the Kurds to carve out enclaves that they’d like to link through further conquests into a single contiguous region bordering Turkey’s southeast.

The incursion has also fueled tensions with Turkey’s Kurdish minority as Erdogan vowed to crack down on planned protests by the pro-Kurdish HDP party. U.S. officials, including Secretary of State Rex Tillerson, have denied that a Kurd-dominated border force is being created -- though the coalition against Islamic State has confirmed it is being formed. “Who are you deceiving?” Erdogan said. “We will eradicate all of them.”

The operation in Afrin will be followed by an offensive against Manbij, he added, referring to another Kurdish stronghold on the western bank of the Euphrates River, where some U.S. troops are deployed alongside Kurdish forces.

Erdogan said Turkey intended to finish the operation in a short time. Authorities declared areas bordering Afrin off-limits until Feb. 3. The plan is to create a buffer zone extending 30 kilometers into Syrian territory, Yildirim said, according to NTV. He played down any negative impact on the Turkish economy.

Turkey has acted against Syrian Kurdish forces before. It began operating in northern Syria in 2016, its participation in an international effort to defeat Islamic State dovetailing with its campaign to block the convergence of Kurdish-run regions. An earlier deployment in Idlib, to the south of Afrin, denied the Kurds access to the Mediterranean Sea -- a prized target for a planned Kurdish corridor running all the way to northern Iraq.

Turkey's Attack on the Kurds Is a Betrayal of the U.S.

The U.S. needs to start imagining NATO without Turkey. The latest reason is Turkey’s assault against the Syrian Kurds. The same Kurds who, with U.S. training and support, have borne the brunt of the fighting against Islamic State.

Turkey is coordinating its attacks with Iran and Russia -- the very countries the North Atlantic Treaty Organization exists to oppose. U.S. interests appear nowhere in the equation. That’s a long-term strategic problem, which goes beyond the moral outrage every American should feel as our Kurdish allies are murdered from the air by F-16s we sold to Turkey.

Turkish President Recep Tayyip Erdogan clearly thinks he can contravene U.S. interests without consequence. His insurance policy is the country’s geographical location. Throughout the Cold War, Turkey’s proximity to the Soviet Union made it a great base for NATO troops and missiles.

The later U.S. wars in Iraq and Afghanistan assured that the air base at Incirlik remained crucial to American military efforts. Turkey is still a nice place to have a troop presence. But there must be some limit to what a supposed treaty ally can do to flout the U.S.

Last May in Washington, Erdogan showed his contempt for the Donald Trump administration and the U.S. by allowing (or perhaps directing) his security guards to attack peaceful protesters in a public park across from the Turkish Embassy in Washington. That was an ugly incident, but its full significance can only be appreciated when juxtaposed with Erdogan’s broader regional policies.

It was no accident that Erdogan was treating sovereign U.S. territory as though it were his personal fiefdom. As far as he’s concerned, Trump works for him -- because Trump lacks any recourse against his conduct.

Now Erdogan is engaged in the historic betrayal of American allies who have done the dirty work that no one else in the world wanted to do. Let’s be very clear: Turkey did not send troops to fight Islamic State in Syria. Neither did neighboring Arab states. The U.S. sent military trainers, who could not have won the war on their own. Islamic State could not be defeated entirely from the air, as the experience of the Syrian civil war showed.

There’s only one reason Islamic State has now been all but defeated on the ground in Syria: the YPG Kurdish militia. In exchange, the Kurds wanted something very simple: somewhere to live where they wouldn’t be massacred by Syrian President Bashar al-Assad’s army or bombed by Assad’s Russian allies.

Sure, they may have hoped for a quasi-autonomous region near the Turkish border, not totally unlike what their Kurdish counterparts have in Iraq. But they are realists, and they would’ve settled for not dying or being forced to flee as refugees. 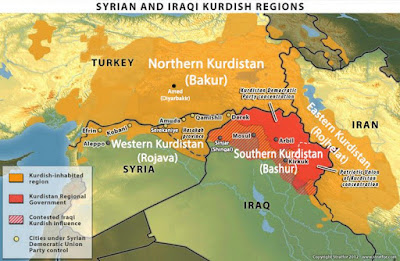 Now Turkey is bombing them, and Erdogan has declared that Turkey will establish a 30 kilometer “safe zone” where the Kurds may not be -- on the Syrian side of the border, mind you, not the Turkish.

That’s not in U.S. interests, to put it mildly. Abandoning allies so publicly and so fast is a great way to make sure no one trusts you in the future. When the reckoning comes for the abandonment of the Syrian Kurds, as it eventually will, the Kurds will hold the U.S. responsible for betraying them.

The Kurds know perfectly well -- and have known all along -- that Turkey doesn’t want them to have even a toehold near Turkish border. But they relied on their close alliance with the U.S. to protect them.

That was perfectly rational. The U.S. has protected and remained allied with the Iraqi Kurds since it first established a no-fly zone in 1991 to stop them from being killed by Saddam Hussein. The U.S. doesn’t want Iraqi Kurdistan to declare independence, but it has accepted and helped sustain the Kurds’ de facto autonomy -- despite many years of opposition by Turkey.

Turkey under Erdogan is now moving inexorably closer to Iran and Russia. The Iranians, whose concern about Kurds living within their territory is comparable to the Turks’, are thrilled to see the Kurds being put down.

And Russian President Vladimir Putin couldn’t care less about the Kurds, provided Turkey respects Assad’s questionable sovereignty over Syria. For Putin, the long game is pulling Turkey into the Russian camp of nations that act against U.S. interests with impunity.

It would be nice to look beyond Erdogan to a future Turkish government that better appreciates its relationship with the U.S. But given Erdogan’s increasingly autocratic rule, that can’t be counted on in the foreseeable future.

The ultimate takeaway here is that Turkey fully understands that the U.S. will pay the political price for its bombing of the Syrian Kurds. When Americans ask, “Why do they hate us?” episodes like the betrayal of the Syrian Kurds are a big part of the answer.

Everyone understands that self-interest dictates foreign policy. But the U.S. always takes the moral high ground in describing its objectives, such as defeating Islamic State. So when the U.S. blatantly allows its NATO ally to destroy the people who did it, the hypocrisy is particularly horrible. And when the moral calculus is drawn, it won’t be an excuse that there was no way to stop Erdogan.

All alliances have their natural end. Unless Erdogan stops spitting in Trump’s face, the U.S.-Turkey alliance is heading for its expiration date.

Who Are The Kurds & What Do They Want?

Since Islamic State (IS) militants swept through Iraq and Syria in 2014, calling into question what have become increasingly meaningless borders, one group has circumstantially found itself on the frontlines of the ongoing war: the Kurds.

But the Kurdish involvement in the battles can be difficult to understand because the poorly-understood Kurds have their own historic troubles with neighbouring countries in the region, as well as multiple internal rifts and factions.

Who are the Kurds?

The Kurds are the largest 'ethnic minority' in the world, estimated to be at somewhere between 25 to 40 million people. Although the majority are Muslim and live in the heart of the Middle East, they do not identify as Arabs. They speak Kurdish, have different cultural attributes, and a history more in line with that of the Persians.

That's simple. Then why do they seem so complicated?

Following World War I when the Ottoman Empire fell, the French and British drew up a new map with new states in 1916 known as the Sykes-Picot agreement.

Although there was push for an official country of Kurdistan to be created, the Kurds did not receive fair representation and were subsequently divided into Turkey, Syria, Iraq and Iran, which has been at the core of the Kurdish dilemma for the last century.

Therefore they are the largest ethnic group in the world to not have a home state, and have since become the largest ethnic minority in four different countries. The reason why the Kurds didn't get their own country is widely debated, but the short answer is usually a mixture of bad luck, tense relations with the Turks, and oil.


Hence the Kurds may be a single ethnic group, but the divisions over time have created numerous variations among the Kurdish peoples, country to country. Most have adopted another national language as well as their own, and resist the Sykes-Picot agreement in direct proportion to the Kurdish policies of the country and circumstances in which they live. 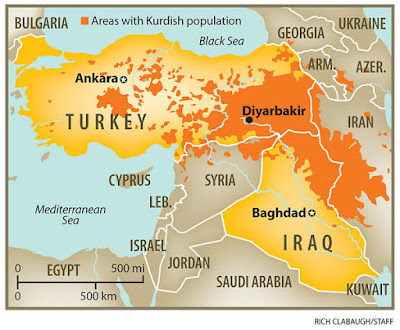