U.N. leader demands Trump live up to Obama deals, accept more migrants: Antonio Guterres has been on the job only a year as secretary general of the United Nations, but he is wasting no time using his position to pressure the Trump administration into honoring deals cut by former President Obama — deals that would lead to a new wave of refugees and asylum seekers coming to America.

As a matter of background, Mr. Guterres is former prime minister of Portugal and a Marxist. He once headed up the Socialist International. Before he ascended to his current position atop the U.N., he headed up the United Nations refugee agency and played a key role in ushering nearly 2 million Muslim migrants into Europe under the false premise that they were “Syrian refugees.”

In fact, the vast majority of those who flooded into Europe were neither Syrian nor refugees but rather economic migrants from an array of Muslim countries including Pakistan, Afghanistan, Iraq, Somalia, Sudan, Albania and Libya.


Guterres is not only a Marxist but an apologist for Islam.

He stated last year that the chief reason for the rise in global terrorism was “Islamophobic feelings” and “Islamophobic policies” in certain Western governments — a veiled reference to the Trump administration. What he’s really saying, of course, is that whenever an Islamic jihadists stabs, shoots or blows somebody up, it’s our own fault because we are not nice enough to the terrorists.

Guterres’ chief deputy at the U.N. is Amina Mohammed, a Muslim woman from Nigeria, and the two routinely get their marching orders from the Organization of Islamic Cooperation, the largest voting bloc at the U.N. comprising 57 Muslim-majority nations.

Now, the secretary general is back on the stump, trying to break the Trump administration’s will and force it to implement the U.N plan for global redistribution of wealth through mass migration and so-called “sustainable development.”


Remember, Trump has pulled the U.S. out of both the U.N. climate pact and the U.N. refugee pact. This leaves the global body in a world of hurt. So Guterres recently announced his plan to do a work-around Trump by appealing directly to Congress for funding of various U.N. programs that involved climate change and the acceptance of more migrants.

He spun a cornucopia of lies in an op-ed last week for the left-wing Guardian newspaper. In that article he writes that Western governments “should” do a lot of things to help the migrants. The best way to combat the problems of illegal migration, he says, is to offer more “legal pathways” from the Third World into the wealthy developed nations.

Earth to the U.N.: The U.S. already allows more than 1 million immigrants to legally enter its borders every year — more than any other nation on the planet. He writes:

“Authorities that erect major obstacles to migration – or place severe restrictions on migrants’ work opportunities – inflict needless economic self-harm, as they impose barriers to having their labour needs met in an orderly, legal fashion.

“Worse still, they unintentionally encourage illegal migration. Aspiring migrants, denied legal pathways to travel, inevitably fall back on irregular methods. This not only puts them in vulnerable positions, but also undermines governments’ authority.

“The best way to end the stigma of illegality and abuse around migrants is, in fact, for governments to put in place more legal pathways for migration, removing the incentives for individuals to break the rules, while better meeting the needs of their labour markets for foreign labour.”

That sounds like extortion to me. Migrants storm the gates of wealthier nations and demand a “legal pathway” or else they will “fall back on irregular methods.”

Oh, and once they get here the migrants should be offered all manner of freebies and subsidies, according to the U.N.’s 2030 Agenda for Sustainable Development. Guterres further states that the remittance checks that migrants send to their families back home are a good thing for the host countries that take them in because these cash transfers serve to “stabilize” to the Third World.

As Joe Otto reminds us in his excellent article for Conservative Daily, after President Trump withdrew from the U.N.’s migrant pact, the United Nations has decided it will not go down without a fight.

“They are now trying to force the United States to make good on Obama’s promises and allow an unlimited number of illegal aliens, migrants, and refugees into the country,” Otto writes.

“The Trump administration laughed at them, daring them to try. The United States has complete sovereignty over its borders, a white house spokesperson declared, and would not be pushed around by the U.N. globalists.” 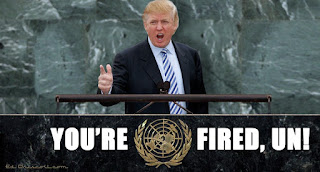 Trump is fighting back by pulling more U.S. funding from the U.N. and it only seems to make the U.N. double down on its efforts to shame the U.S. administration into compliance. With budget negotiations going on in Congress this week, and a Friday deadline approaching, now is the time for Americans to demand Congress pull all funding for the U.N. Those who refuse will be exposed as globalists who do not back Trump’s America-first agenda.

According to the U.N.’s own records, approximately 70 percent of the migrants who stormed into Western Europe in 2015-16 were young, healthy men of fighting age. More from Otto here:

When President Trump announced he was withdrawing from the U.N. Climate Treaty, the bureaucrats at the United Nations declared that Trump was bound to the promises made by Obama. The same goes for the U.N.’s Arms Trade Treaty, with the U.N. demanding that Trump’s State Department fulfill the gun control promises that Obama gave them.

When the White House began cracking down on illegal immigration and announced bans on refugee admissions from terror hotspots, the U.N. began exploiting loopholes to force Trump to take in illegals and refugees anyway.

Just last month, a local politician in Chicago actually suggested that UN monitors be brought in as peacekeeping forces to impose gun control to bring the carnage to an end. While the request was denied out of hand by Mayor Rahm Emanuel, the seed has already been planted in the American psyche that this option is available.

The U.N. Human Rights Council is calling the tax cut bill a violation of Americans’ human rights, because it knows that any cuts in revenue could translate in less money for the U.N. [The U.S. taxpayer funds 22 percent of the U.N. general budget and 28 percent of its peace-keeping budget].

The United Nations now uses the funds Obama gave them to undermine the current president’s agenda. So globalists in Congress from both parties want to make sure the new budget allows the U.N. to continue its anti-American efforts next year.

As Otto points out, there are any number of issues that justify defunding the U.N.

Rep. Ann Wagner, R-Mo., is demanding the U.N. be defunded over its population control abortion programs. The UN “has no mandate to endorse, in any way, pro abortion policies and campaigns,” she declared, “and when they do, the American taxpayer certainly has no duty to pay them.”

Trump ordered an end to U.S. funding of U.N. abortion programs, but the United Nations has moved money around to keep their abortion agenda fully funded. Sen. Ted Cruz is still pushing a bill to defund the U.N. over its anti-Israel agenda, with wide support across party lines (including support from Senate Minority Leader Chuck Schumer).

There are still other members of Congress who are pushing defunding measures over the U.N.’s radical anti-gun and climate agendas, which were propped up by Obama. Whatever the reason for defunding the UN, the point is that this needs to happen, and now is the time to make it happen.


(Leo Hohmann is a veteran journalist and author of the 2017 book “Stealth Invasion: Muslim Conquest through Immigration and Resettlement Jihad.” Donate to this website and help support his investigative reporting on topics most journalists are afraid to touch.)