The white supremacists on the far right have “yellow fever” — an Asian woman fetish. It’s a confusing mix.

Andrew Anglin, the founder of the neo-Nazi website The Daily Stormer, once posted a video of himself with a Filipina he called “my jailbait girlfriend,” the young couple flirting as they sauntered through a megamall in the Philippines.

Richard Spencer, a white nationalist, has dated a series of Asian-American women, according to one of his ex-girlfriends. (Mr. Spencer insists that it was before he embraced white nationalism.)

The right-wing agitator Mike Cernovich, the writer John Derbyshire and an alt-right figure named Kyle Chapman (so notorious for swinging a lead-filled stick at Trump opponents at a protest in Berkeley, Calif., that he is now a meme) are all married to women of Asian descent.


As a commenter wrote on an alt-right forum, “exclusively” dating Asian women is practically a “white-nationalist rite of passage.”

In November 2016, a photo of Tila Tequila giving a Nazi salute went viral. Ms. Tequila is the Vietnamese-American star of the short-lived MTV reality show “A Shot at Love With Tila Tequila,” and she was saluting at a dinner the night before the conference of Richard Spencer’s white-supremacist think tank, the National Policy Institute. At the conference, Mr. Spencer had reminded attendees that America was a “white country designed for ourselves and our posterity.”

Maybe it makes sense that the alt-right is so confused: On a neo-Nazi news site, a user asked advice on whether he could be a white nationalist if he slept with East Asian women, and he received dozens of spirited responses from both sides. But the white-supremacist Asian fetish is no contradiction.

It exists at the intersection of two popular racial myths. First is the idea of the “model minority,” in which Asian-Americans are painted as all hard-working, high-achieving and sufficiently well-behaved to assimilate.

If Asians are the model minority — if that is how nonwhites can find acceptance in white America — then perhaps that opens the door to acceptance from white supremacists.

The second myth is that of the subservient, hypersexual Asian woman.

The white-supremacist fetish combines those ideas and highlights a tension within the project of white supremacism as America grows more diverse — a reality that white nationalists condemn as “white genocide.” The new, ugly truth? Maintaining white power may require some compromises on white purity. 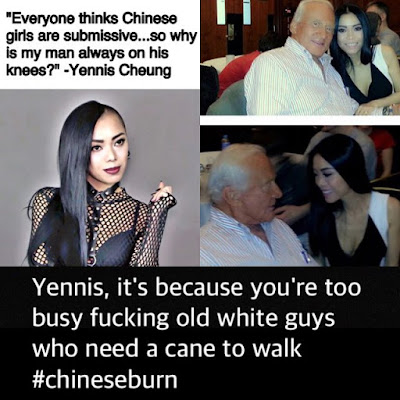 Was Tila Tequila at that white supremacist dinner just attempting, in some twisted way, to assimilate? Or to rebel against what was expected of her? I cringe at her antics, at her trying to be just one of the white-supremacist bros.

But the photo also conjured up my memories of being a 14-year-old Asian girl in an overwhelmingly white school who wanted to be interesting, self-possessed and liked. Instinctively, I knew it meant distancing myself from the other Asian kids, especially the nerdy and studious ones. I knew I had succeeded when a friend remarked that I wasn’t really Asian, I was white, “because you’re cool.”

As I skipped classes to smoke in the courtyard, read Baudelaire to seem the “interesting” kind of smart and attempted to distance myself from the stereotypes, I didn’t know that the idea I wanted to run from — of Asians as civilized, advanced and highly intelligent — had roots in white supremacy.
But between the white supremacist Chris Cantwell’s tattoo of a Japanese character and the Charleston shooter Dylann Roof’s speculations that Asians “could be great allies of the white race,” there are echoes of history’s most infamous white nationalist.

“I have never regarded the Chinese or the Japanese as being inferior to ourselves,” Adolf Hitler said in 1945. “They belong to ancient civilizations, and I admit freely that their past history is superior to our own.”

In the United States, the model-minority myth grew from Asian-Americans’ mid-20th-century efforts to win civil rights, as the scholar Ellen D. Wu recounts in “The Color of Success.” Previously, Asian-Americans, many with humble roots in rural China, were considered degenerate, subject to lynchings, and forced to live in segregated neighborhoods and attend segregated schools under a regime of discriminatory laws and practices she has called a “cousin to Jim Crow.”

But, according to Professor Wu’s research, Chinese-Americans promoted themselves as hard-working, obedient, family-oriented and able to easily assimilate into American life — traits that are not uncommon in poor immigrant communities, where many have made enormous sacrifices to move to a foreign place.

By the height of the civil rights movement, America was already giving preferential treatment to educated, professional Asian immigrants, reinforcing the idea of Asians as pliable and studious. White politicians co-opted the myth, pointing to Asian-Americans as proof that the right kind of minority group could achieve the American dream. 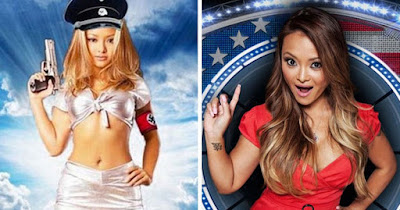 Professor Wu found that just months before the release of the 1965 Moynihan Report, the widely influential policy paper that attributed black poverty to a degenerate black culture, its author, Daniel Patrick Moynihan, spoke at a gathering of intellectuals and policymakers about how Japanese- and Chinese-Americans, considered “colored” just 25 years earlier, were “rather astonishing.” “Am I wrong that they have ceased to be colored?” he asked.

In reality, Asians are rarely considered white, and the model-minority myth obscures the vast differences among Asian-Americans. What’s more, the myth helped to strengthen America’s white liberal order, which claims to uphold diversity while also being anti-black. It legitimizes white America’s power to determine who is “good” and to offer basic dignity and equal rights.

The model-minority myth exists alongside another dangerous and limiting idea — one that is consistent with the alt-right’s misogyny and core anti-feminist values. The main problem with white women, as many alt-right Asian fetishists have noted, is they’ve become too feminist. By contrast, Asian women are seen as naturally inclined to serve men sexually and are also thought of as slim, light-skinned and small, in adherence to Western norms of femininity.

These stereotypes have roots in America’s postwar military incursions into Asia. In Japan, a network of brothels permitted by American officials opened as United States troops began arriving in August 1945. The brothels employed tens of thousands of women until Gen. Douglas MacArthur declared them off limits in 1946.

In South Korea, an estimated 300,000 women were working in the sex trade by 1958 (after the end of the Korean War), with more than half employed in the “camptowns” around the American bases. Vietnam’s sex industry, centered largely on American bars, thrived during the Vietnam War. And the stereotype of docile Asian women persists. Nowhere is this more explicit than in sex ads and online pornography. 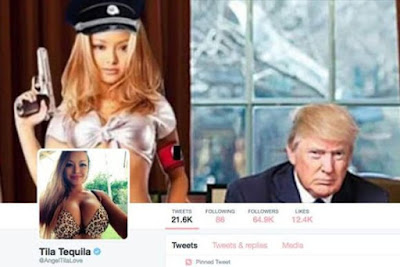 Yet after I was called “white” at age 14, it felt, paradoxically, like a compliment to be nicknamed Geisha Girl by another friend, a well-meaning gay white boy. This was not because I was delicate. But the nickname became our inside joke, and it symbolized the kind of femininity that attracted the boys I liked, but that I have never really possessed.

Being in on the joke meant I was accepted. Since then, I have acted out in all manner of ways to dispel the “model minority” image. Still, I have never fully extinguished the belief that racking up an impressive lineup of achievements is the only way to gain respect.

The stereotypes that feed the Asian-woman fetish are not exclusive to the far right. They exist across the political spectrum and infect every aspect of life — not just the bedroom — and manifest themselves in figures as distant from America as the blond-haired, blue-eyed heroes and hypersexualized heroines of Japanese anime.

This fun-house mirror asks me to be smarter, nicer, prettier and more accomplished than my white counterparts for the same amount of respect, then floods my dating app inbox with messages that reek of Asian fetish. Thankfully, I’m not required to care or let it define me; for what it’s worth, I am even entitled to play up the stereotypes if I see something to be gained.

Maybe this is where the Asian girlfriends of alt-right men stand. But none of us can escape the truth that the fun-house was built to justify systematic exploitation of everyone in this country who isn’t white. That’s important context. Otherwise, Richard Spencer’s comments could almost sound nice.


“There is something about the Asian girls,” he once said to Mother Jones. “They are cute. They are smart. They have a kind of thing going on.” 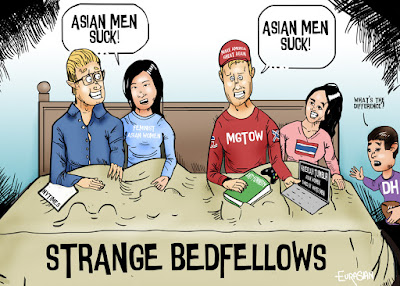