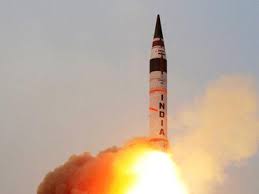 India successfully launched a long-range intercontinental ballistic missile (ICBM) on Thursday. The nuclear-capable Agni-V ICBM was fired from Abdul Kalam island off the coast of the eastern state of Odisha at around 9:53 a.m. local time (11:23 p.m. ET on Wednesday).

India's Defense Ministry said on Twitter that the test was a "major boost" to the country's defense capabilities, “I congratulate the Armed Forces and Defence Industry for the successful flight test of the long range ballistic missile Agni-V. A major boost to the defence capabilities of our country.”

The same missile has been tested five times over the past six years, with the most recent test prior to Thursday's launch coming in December 2016. That test prompted exasperation from two of New Delhi's most important continental rivals, China and Pakistan.


Relations between China and India deteriorated significantly in 2017, following a protracted border dispute in the western Himalayas. And given the world's two biggest emerging economies are both equipped with nuclear weapons, observers were fearful of escalating geopolitical tensions.


The Federation of American Scientists estimates that India has around 120 to 130 nuclear warheads in its arsenal, while China is believed to possess around 270. Pakistan's military stockpile is thought to be within the region of 130 to 140.

Pakistan has repeatedly expressed concern over India's development of ICBMs. Shailesh Kumar, senior analyst for Asia at Eurasia Group, wrote in a blog post Friday that Pakistan's biggest priority was to "bring India down a peg."

Meanwhile, Kumar said the U.S. had a natural interest in "building India as a regional power, in part to counter China, and has advanced the U.S.-India strategic partnership and furnished New Delhi with the latest defense technology." 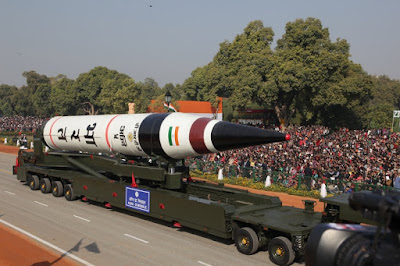 China should enhance presence in Indian Ocean to counter India

"We have successfully launched nuclear capable ballistic missile Agni-V today," the Times of India quoted Defense Minister Nirmala Sitharaman as saying. There was no further comment on whether the missile had met all the parameters for the test, the report said.

After the test, the missile would be finalized and produced in large scale, and will become a fighting force in the coming years, Song Zhongping, a military expert and TV commentator, told the Global Times on Thursday.

Though the report said the Agni-V can "reach the northernmost parts of China with its strike range of over 5,000-kilometers," Chinese experts expressed skepticism. "Though the missile could theoretically hit Beijing, India's missile technique is far below the standard," Hu Zhiyong, a research fellow at the Institute of International Relations of the Shanghai Academy of Social Sciences, told the Global Times on Thursday.

Nevertheless, China should be on the alert and further upgrade its anti-missile techniques, Hu added. Aside from the missile, India is developing various kinds of weapons to compete with China, and its development of nuclear weapons shows that India is engaging in a nuclear arms race with China, Song said.


"It is also a big challenge to the Nuclear Non-proliferation Treaty as India owns such a big nuclear arsenal," he said. The missile test is being dubbed as another step toward its eventual inclusion into the Strategic Forces Command (SFC).

A few more tests remain to be conducted before the 50-ton missile is produced in adequate numbers, the Xinhua News Agency reported on Thursday. The tri-service SFC was established in 2003 to manage India's nuclear arsenal, Xinhua reported.

Aside from the shorter-range missiles "Prithvi" and "Dhanush," the SFC has already included the "Agni-I," "Agni-II" and "Agni-III" missiles in its arsenal, Xinhua reported. Thursday's test comes a day after India's joint sea drills with Japan in the Indian Ocean. India hopes to enhance cooperation with Japan as a way of restraining China, Japan's public broadcaster NHK reported, citing unnamed experts.

"India is trying to build a military system with Australia, Japan and the US in order to keep a closer watch on China, which poses a direct threat to China," Song said. China should keep increasing its economic as well as defense capability, Song added.

Song also said that since the Indian Ocean is a "must enter" region for the Belt and Road initiative as well as the national strategy of building China into a maritime power, China should also enhance its military and economic presence in the Indian Ocean. 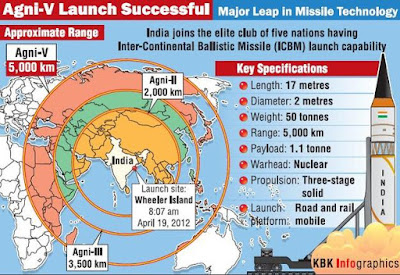 India's Ballistic Missile Test Is a “Direct Threat” To China

India’s test this week of a long range intercontinental ballistic missile with the capability of hitting China’s eastern coastal cities constitutes a threat to regional security, a China’s state-owned newspaper has declared, calling for increased Chinese presence in the Indian Ocean to counter its regional rival.

The ballistic missile test, India’s fifth, “poses a direct threat to China’s security as well as a big challenge to the global efforts of nuclear-nonproliferation,” China’s Global Times writes. The missile, called the Agni 5, was launched from eastern India on Thursday and traveled 3,000 miles, the New York Times reported, putting China’s coastal cities, including Beijing and Shanghai, in range. India’s last missile test was in Dec. 2016.

The missile is India’s most advanced in its Agni series—the name means fire in Hindi—and is capable of delivering a payload of 1.5 tons, enough to carry a fusion-assisted fissile nuclear warhead, according to the Delhi Defense Review, an India-based security publication. “With a range of ‘easily more than 5,500 km’ [3,400 miles], the Agni-V clearly confers upon India the ability to hold all of China’s Eastern Seaboard cities at risk from Peninsular India,” the journal said. 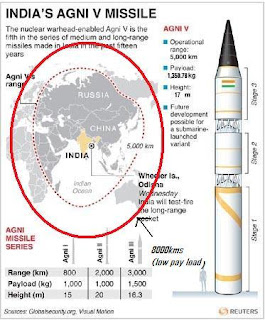 Other estimates have put the missile’s range at as much as 5,000 miles, with Du Wenlong, a researcher at the Chinese Academy of Military Science, previously telling the Global Times that India had “deliberately downplayed” the missile’s capacity to “avoid causing concern.”

(Blogger’s Notes: India is telling the world that the range of Agni 5 is only 5,000km to just make sure that Agni 5 is counted as an ICBM, but at the same time, it should not worry any NATO country. Agni-5's actual range is around 8,000km and those Chinese experts were correct in accusing India of downplaying the range of Agni-5 ICBM. Aussies should be worrying too since their Sydney and Melbourne are also in the Agni-5's actual reach.)

The test comes months after a military stand-off between India and China over the 34-square-mile Doklam Plateau, a Himalayan pass between China and Bhutan that India perceives as a strategic buffer. The rivals fought a war in 1962 over disputed borders, which have never been formally resolved.

India also conducted joint military exercises with Japan this week in the Indian Ocean, a key area where China is attempting to exert greater economic influence as well as flex its muscles as a regional naval power.


“India is trying to build a military system with Australia, Japan and the U.S. in order to keep a closer watch on China,” television military analyst Song Zhongping told the Global Times, adding that China should renew efforts in the Indian Ocean as part of its wide-ranging Belt and Road Initiative.