The U.S. State Department announced on Thursday that Iran’s Islamic regime has arrested at least 1,000 Iranians since protests began and announced that it will hold an emergency meeting to discuss the uprising and how to provide support for the people.

“We condemn the deaths to date and the arrests of at least 1,000 Iranians by the Iranian regime during this week’s protests and called on the United Nations Security Council to speak out in support of the Iranian people,” State Department spokesperson Heather Nauert wrote.

Also on Thursday, Nauert said in a press release, “We have ample authorities to hold accountable those who commit violence against protesters, contribute to censorship, or steal from the people of Iran.”

According to Amnesty International, hundreds of detained Iranians are being held in the notorious Evin Prison’s “quarantine section, an area that has the capacity to hold a maximum of 180 people.”


This week, Musa Ghazanfarabadi, the head of Iran’s Revolutionary Court, warned that the arrested protesters could face the death penalty, specifically, that they would face charges including “moharebeh,” which in Farsi means “waging war against God and the state.” It is punishable by death. The Arabic version of “moharebeh” is “ḥirabah.”

Amnesty International reportedly called for the release of those arrested. “The Iranian authorities have an appalling track record of carrying out mass arbitrary arrests of peaceful demonstrators,” Philip Luther, the regional research and advocacy director at Amnesty International, said, adding:

Given the alarming scale of the current wave of arrests, it is highly likely that many of those held are peaceful protesters who have been detained arbitrarily and now find themselves in prisons where conditions are dire and torture is a common tool to extract confessions and punish dissidents. Protests have continued for a ninth day throughout various cities in Iran.

Iran’s elite Iranian Revolutionary Guard Corps (IRGC) reportedly deployed its forces to three provinces in an attempt to crush the anti-government protests. On Wednesday, General Mohammad Ali Jafari, chief of the IRGC, was quoted on the IRGC’s website announcing “the end of the sedition” of protesting.

Jafari reportedly said, “A large number of the trouble-makers at the center of the sedition, who received training from counter-revolutionaries … have been arrested and there will be firm action against them.”

Ahmadinejad, who recently became a thorn in the side of Supreme Leader Ayatollah Khamenei with a banned second presidential run, reportedly blamed the recent protests in the country on the Islamic regime’s “monopoly on public wealth.”

Despite reports continuing to surface of protests against the regime calling for an end to Islamic theocracy, Iranian officials declared last week that the “sedition” had ended and been replaced with government-mandated rallies in support of Khamenei.

The original Al-Quds Al-Arabi report (in Arabic here) claimed that police arrested Ahmadinejad for “inciting unrest against the government.” The UK newspaper cites “reliable sources in Tehran” who reportedly say police are seeking to place Ahmadinejad under house arrest to prevent him from encouraging Iranians to protest further.

Israel’s i24 News translated some of the comments attributed to Ahmadinejad. “The government of Hassan Rouhani believes that they own the land and that the people are an ignorant society that does not know,” the former president reportedly told protesters at an anti-government rally.

“What Iran suffers from today is mismanagement and not lack of economic resources. The people are angry at this government because of its monopoly on public wealth,” i24 translates his alleged comments as concluding.

Ahmadinejad, who served as president of Iran between 2005 and 2013, attempted to run for president against last year, announcing his candidacy in April. Khamenei’s Guardian Council, which must approve all presidential candidates, swiftly banned him from participating. Rouhani won re-election easily in an election that, like its predecessor, was dismissed internationally as neither free nor fair. 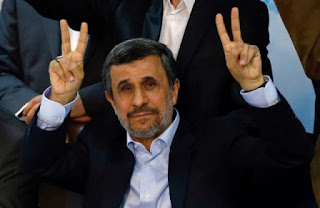 Ahmadinejad has not faded out of the public eye, however, and spent much of late 2017 antagonizing Khamenei and his judiciary. In December, Ahmadinejad made public appearances calling for the resignation of top judiciary officials and accusing the Rouhani government of misappropriating public funds.

He had previously accused the judiciary of overreach, prompting senior judicial officials to insinuate that Ahmadinejad had participated in sedition. In late December, Ahmadinejad demanded Prosecutor-General Hojatoleslam Mohammad Jafar Montazeri publish any proof of seditious acts he had against him.

The scuffle resulted in a rare, if unnamed, reprimand by Khamenei himself. In remarks that outlet Al-Monitor suggests were intended for Ahmadinejad, Khamenei recently warned that “[one who] pretends to be revolutionary is not [necessarily] a revolutionary” and that “those who had all the country’s facilities under their control and those who had the countries’ management facilities under their control aren’t entitled to play the role of opposition and talk against the country; rather, they should be responsive [now].”

Ahmadinejad’s vocal opposition to the establishment comes as a notable role reversal for the president responsible for the deadly repression of secular youth protesters in 2009’s Green movement, triggered by accusations that Ahmadinejad had stolen that year’s presidential election.

That rebellion resulted in thousands of arrests and dozens of deaths, among the most prominent that of 26-year-old Neda Agha-Soltan, whose shooting death was caught on camera and spread around the world. At the time of the protests, Ahmadinejad’s government banned a public mourning ceremony for those killed in the protests and Ahmadinejad himself blamed the protests on Israel.

Despite Ahmadinejad’s reported presence among the dissidents, Rouhani himself is doing the same. Other Iranian officials have blamed, among others: American, Saudi, and Kurdish agents; Iranian dissident groups; and former Saddam Hussein loyalists. In remarks last week, Khamenei warned that unspecified “enemies” of Iran had planned the protests.

Thousands have taken the streets of multiple major Iranian cities since December 27 to demand the regime spend more money on a stable domestic economy and cease its funding of Hezbollah, the Yemeni Houthi movement, and other foreign terrorist activities.

While initial reports suggested the protests began in response to skyrocketing prices of basic food goods, footage from the protests shows crowds chanting “death to Hezbollah” and “we don’t want an Islamic republic,” among other political demands.

The prevalence of footage of protests dwindled significantly after Tehran banned the use of social media apps like Whatsapp and Telegram, the latter of which an estimated half of Iranians use to communicate free of government intervention.


The Trump administration has stated its desire to help Iranians access social media to organize against the government peacefully. An estimated thousand protesters have been arrested in protests in the past two weeks. 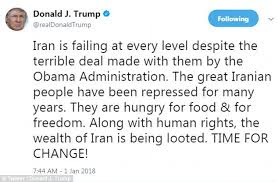