Aussie Flu Killing 100 A Week In US & Infecting Whole UK 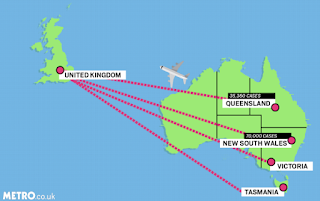 A deadly flu virus has been killing around 100 people per week in the US since mid-December, the Center for Disease Control has warned. A report published by the CDC with the latest figures showed there were 759 flu deaths between 7 October and 23 December.

It also said since early December more than 100 people were dying every week from the flu and the death toll could increase as there has been a further rise in the number of hospital admissions.

This is more than double the number of flu deaths from the same period last year when there were only 322 reported fatalities, CBS News reported. An increase in the number of reported cases of the flu during the winter is common and usually peaks around Christmas and New Year when more people are travelling and spreading illness.


But this year’s prevailing strain H3N2 – which has been dubbed “Aussie flu” – is known to be particularly vicious and strong. In the UK, 149 people have so far died and last week 4,500 people were hospitalised, according to Public Health England fiures.

Some 120 flu deaths have been recorded in England, 21 in Scotland and eight in Northern Ireland. There is no precise data available for Wales. The Catholic diocese of Down and Connor in Northern Ireland has temporarily banned its priests from shaking the hands of parishioners as they receive Holy Communion in favour of a “sign of peace” to avoid spreading the virus.

Meanwhile people are still being urged to get a flu jab to help protect vulnerable people. A letter sent to every GP practice in England last week warned that up to three million high risk patients had yet to have the jab. The flu virus mutates every year so even people who have had the vaccine in previous years need to be immunised against this latest strain. 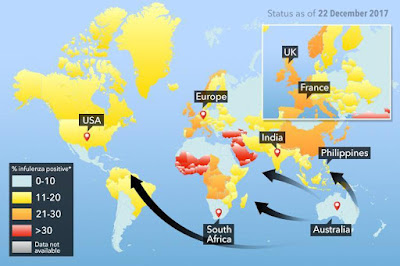 What is Aussie flu, what are the symptoms of the virus?

A BRUTAL influenza strain has hit the UK from Down Under - leaving Brits facing the worst flu season in 50 years. But what exactly is Aussie flu, and how is it different from the normal winter bug? Here's what we know...

What is Aussie flu?

The strain of flu is called H3N2, and public health expert Professor Robert Dingwall, from Nottingham Trent University, warned it was "almost inevitable" the winter bug will hit Britain this winter.

The number of flu deaths in Australia over their winter has not yet been released, but it's thought to be the worst in years. Earlier this year Aussie flu claimed its first victims in Ireland - as the Health & Safety Executive (HSE) revealed a number of people have already died from the virus.

Dr Kevin Kelleher, from the Health Protection department, told Independent.ie: "There have been a few deaths already... under 10 people have died so far this year." This map shows how most of the country has been affected by the 'Aussie flu', with red areas the most heavily hit.

Some 4.5million people are thought to have been struck down by flu over the past week, according to the online tool FluSurvey. One in four hospital cases of flu are thought to be patients battling the "Aussie strain", with 17 people admitted to intensive care with the strain in the week before Christmas.

Which areas of the UK have been worst hit by Aussie flu?

A surge in infections has seen cases of the new H3N2 strain skyrocket in recent weeks as the NHS faces a seriously challenging flu season. Plymouth, Doncaster and Durham are revealed as Aussie flu hotspots while other parts of the country have no recorded outbreaks, according to a map compiled by the FluSurvey website.

Dartford is one of the last areas to have cases reported, with Essex, Teesside and Devon appearing to be among the worst-hit regions. Dorchester in Dorset and the City of London as of January 6 were the only places where no one has yet reported an “influenza-like illness” - with churches even banning handshakes in an attempt to curb the spread of infection. It relies on patients self-reporting so the true figure in each region is likely to be far higher. 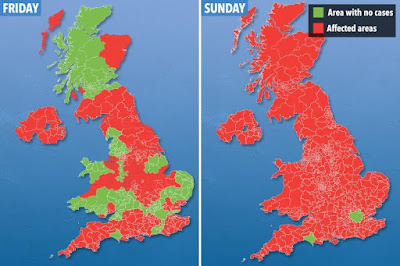 How many people have been affected by Aussie flu?

Public Health England revealed 1,649 people had been struck down with Aussie flu over the Christmas week, up almost half on the week before.

And at least 73 have already been admitted to hospital, causing doctors to urge people to get vaccinated - as the flue "actively circulates" in Ireland. Professor Dingall previously told the Daily Express that this is the most serious flu epidemic since the 1968 pandemic that started in Hong Kong and killed a million people worldwide.

H3N2 is a mutated strain of flu, meaning the vaccine in Australia has been less effective than hoped. Mum-of-two Jennifer Thew, who's originally from Germany, was one of those to die from flu in Australia in September. She died from acute respiratory distress syndrome caused by flu - even though she worked as a medical receptionist and had been vaccinated against it.

What are the symptoms of Aussie flu?

Symptoms of Aussie flu are similar to those caused by normal flu, but they are more severe. Here are some signs to look out for: Sore throat and cough, Headache, Fever, Muscle ache, Fatigue, Runny nose, and sneezing.

People should recover from normal flu within a week so, although the cough and fatigue may last longer. So if you're still really ill after seven days, it's a good indication of something more serious. Aussie flu can lead to pneumonia and other potentially fatal complications.

Who is most at risk from Aussie flu?

Those most at risk are the over 65s, pregnant women, young kids and those with chronic conditions - like diabetes, lung and heart disease. Back in September, NHS bosses urged all eligible Brits to get the free flu jab - but admitted it was too late to tweak the strains in their stockpile.


More than 21 million Brits can get a free vaccine. In 2016, it didn't match the dominant flu strain - causing the biggest spike in winter deaths since the 60s. 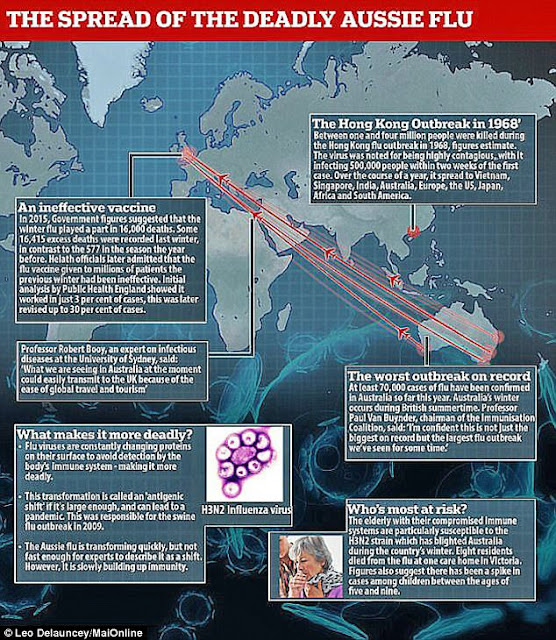