The reason was very simple since the Diversity Visa Lottery is the only program bringing mainly Black immigrants into United States from Africa and the Caribbean.

“The gloves are coming off — the point system is not enough,” said a senior member of the Congressional Black Caucus on the issue of the diversity visa lottery being axed in the “gang of eight” immigration legislation. One member of the CBC stated publicly that he will not vote for an immigration bill that does not include the diversity visa program.


According to the State Department, the Diversity Immigrant Visa Program, “makes 50,000 diversity visas available annually, drawn from random selection among entries of individuals who are from countries with low rates of immigration to the United States.”

At least 15 members of the Congressional Black Caucus are questioning why the 50,000 diversity visa program was ended in the “gang of eight” immigration reform bill formally introduced. Many members view the diversity visas as one of the few ways African and Caribbean immigrants can become American citizens.

The diversity visa lottery was to be ended and replaced with a “point system” that evaluates immigrants on a merit based system.  Education and ability to speak english, among other things, is used to evaluate an immigrant’s value to the U.S.

Not only the Black Caucus but also the NAACP (National Association for Advancement of Coloured People) is also questioning why diversity visas were eliminated.

CBC the Black Caucus understandably is always looking for ways to bring in more and more blacks into US to expand their black voter base, and the Diversity Visa Lottery has been letting mostly black immigrants into US and DVL is also the quickest way to attain US citizenship for a foreign black, within two short years, so that the new black citizens can vote for their black candidate.

Diversity Visa Lottery That Admitted Terrorists Into US 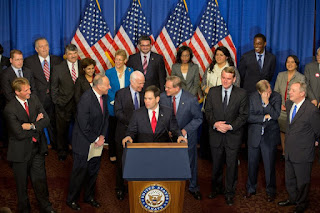 (Left) Members of the so-called Gang of Eight unveiling details of their immigration bill in 2013, which would have ended the visa lottery. The bill died because of opposition to its proposals to legalize undocumented immigrants.

The terrorist ramming attack killing eight on a New York bike-lane quickly turned into a debate over immigration policy after President Trump revealed Wednesday that Sayfullo Saipov, the man accused of killing eight people, had benefited from an obscure program known as the diversity visa lottery.

Mr. Trump’s comment — and his attack on Senator Chuck Schumer, the New York Democrat who was instrumental in creating the program in 1990 — threw a spotlight on the lottery, a small part of the overall immigration system that nonetheless has been criticized by members of both parties. Mr. Schumer, in fact, was among senators proposing to end it several years ago.

The lottery offers one of the fastest paths to legal permanent residency, often in less than two years. Some one million people have been awarded green cards through the program. Unlike other immigrants who gain admission, winners of the lottery do not need to have a close relative living in the United States, or any special skill.

It is indeed a little like hitting a lottery. Some years, the program has attracted nearly 15 million applications, but no more than 50,000 visas may be awarded. During the monthlong application period each fall, which is currently in full swing, the lottery creates a craze in countries where it is regarded as a ticket out of poverty and to the American dream.
Help for the Irish

The program had its origins in the Immigration Act of 1965, which eliminated country quotas that had favored Western Europeans and replaced them with an immigration system based mainly on family reunification.

After the 1965 law went into effect, immigration from Asia and Latin America soared but arrivals from Ireland, Italy and other European countries dropped precipitously.

In the 1980s, Irish-American congressmen led by Brian Donnelly, a Democrat from Boston, drafted a temporary measure, which passed in 1986. It provided an alternative path to a green card for citizens of countries “adversely affected” by the 1965 reforms, including Ireland.

In 1990, Mr. Schumer was the lead sponsor of a bill that, among many immigration provisions, would transform the temporary program into a permanent one. The proposal was included in a bill that ultimately passed, and the lottery was born.

In its early years, most winners were European, but now about half hail from Africa. In 2016, Nepal, Egypt and Iran had the most recipients, according to the State Department. Uzbekistan, where Mr. Saipov emigrated from in 2010, ranked fifth last year, with 2,378 recipients. Over all, the program contributes about 5 percent of the approximately one million legal immigrants that enter the United States each year.

The program is available to people around the globe, except in countries that already have large numbers of citizens immigrating through traditional means, including Mexico, China and India. No special skills are required. A high-school diploma suffices. There is no limit to how many years a person can enter the lottery, but no country can account for more than 7 percent of all visas issued in one year.

At a nameless internet cafe in the middle of Dakar, Senegal, on Wednesday, about a dozen people filled out applications with the help of the owner, Ouseynou Diouf. Clients paid him about $10, two to four days’ worth of wages, for internet access and his guidance.

Many were repeat customers, including Faly Senghor, 28, a fashion designer who said he was applying for the second time. His dream, he said, was to add “a taste of Africa fashion” to the fashion industry in the United States. To enter one must pay several hundred dollars in fees.

In the spring, a government computer in Kentucky selects 100,000 entries for green card processing. At noon on May 15, millions of people around the world will click on the State Department website to find out if they are among them. Even then, a visa is not guaranteed. Winners are interviewed, undergo background checks and medical exams. Many are eliminated for failing to meet requirements and deadlines.

Ultimately, 50,000 people — lottery winners, as well as spouses and minor children they want to bring over — are awarded visas, which entitle them to move to the United States as legal permanent residents, or green card holders. Like most others with green cards, they may apply for citizenship after five years.

Olsi Vrapi, an immigration attorney born in Albania, won the lottery in 2003 when he was on a student visa at University of New Mexico. “Thanks to the green card lottery I was able to stay here, go to law school, marry my wife, have four beautiful children and build a law practice,” said Mr. Vrapi, whose Albuquerque-based firm has grown from two to 23 employees in four cities and four states.

During public remarks at a cabinet meeting on Wednesday, Mr. Trump said that Mr. Saipov was “the primary point of contact for — and this is preliminarily — 23 people that came in, or potentially came in with him.” Green card holders in the United States can sponsor immediate family members to receive their own green cards, but it was not immediately clear what the 23 number referred to. 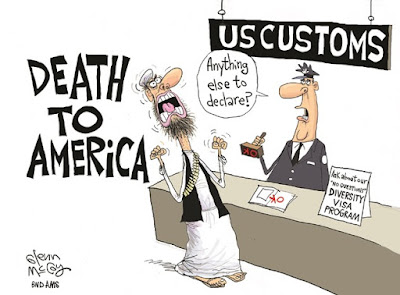 Calls to End the Lottery

The program had been under scrutiny even before the terrorist attack. Critics have long contended that the program poses security risks, brings in low-skilled immigrants and is unfair because it enables people with no connection to the United States to enter more easily than others.

“A lottery is a crazy way to run an immigration system,” said Steve Yale-Loehr, a professor of immigration law at Cornell Law School, adding, “No other country selects immigrants based on a lottery.”

Among supporters of the program are members of the Congressional Black Caucus, who highlight that it helps black Africans who otherwise would not have the opportunity to come to the United States.

Addressing the security questions, a Congressional Research Service report in 2011 noted the case of an Egyptian immigrant who shot and killed two people in 2002 at Los Angeles International Airport. He had obtained a green card as the husband of a lottery winner. The report noted that in 2004, the State Department’s deputy inspector general had warned about the risk of granting visas to winners from countries with ties to terrorism. But in 2007, the report said, the Government Accountability Office found no evidence that diversity visa winners posed a threat.

The program has been marred by fraud. One year an applicant submitted more than 2,000 entries. Other winners have sold themselves for marriage to bring a spouse to the United States.

Mr. Trump, who has championed merit-based immigration intended to attract high-skilled workers, said Wednesday that he backed a Senate bill that would reduce legal immigration and kill the lottery.


The bill died amid Republican opposition in the House to the bill’s provision to grant a path to citizenship for undocumented immigrants. Mr. Schumer said on Wednesday that the president was politicizing the tragedy. 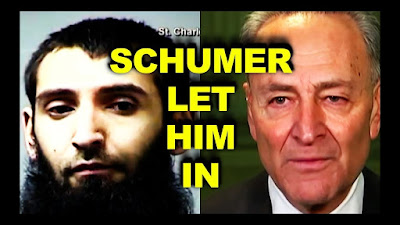 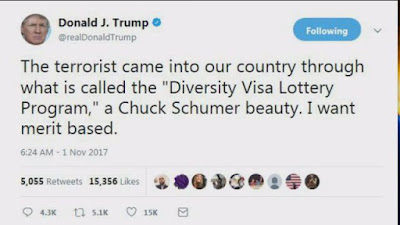 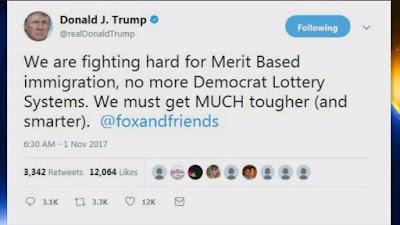