(This post is translation of news articles from the Myanmar Military Blog.) 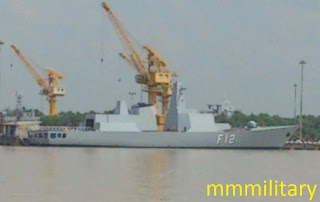 Kyansitthar, recently reincarnated as the latest stealth frigate (F-12) of Burma Navy, was a Burmese general who became a famous Burmese king (1084-1112) after King Anawrahta (1044-1077) the founder of Pagan dynasty and the first Burmese empire.

Kyansitthar (F-12) is the second frigate designed and made in Burma at the Naval Dockyard in Rangoon after the first local-made frigate F-11 Aungzeya. But Kyamsitthar is a stealth frigate incorporating various stealth technologies in its superstructure, communication systems, and weapon systems.

Partly finished Kyansitthar frigate without communications and weapon systems was launched in September 2012 and now is undergoing the installation process of its systems for the whole of this year.

The 108m-frigate design was based on the successfully-built frigate F-11 Aungzeya but the stealth technology was new technological improvement over Aungzeya.

The 25 knots capable frigate will have a helicopter-deck and Burma Navy is expecting that the vessel will be completed in early 2014. Like Aungzeya Kyansitthar’s main missiles will be Russian-made Kh-35 guided missiles while its CIWS will be AK-630 30 mm short-range air-defence systems.