(This post is translation of news article from various Burmese blogs.)


According to the KIA sources the feared General and his entourage in 6 SUV convoy was on an inspection tour of KIA defensive positions around Laiza when a roving helicopter gunship spotted them on a hill just outside of Laiza and sprayed them with .50 calibre heavy machineguns.

His bodyguard-major and seven Lawaw guards were killed and Gam Shaung was hit in the mid belly and thighs. He was sent to Laiza Hospital and later transferred to the Provincial Hospital at Htein-chone across the border in China. His situation is deteriorating fast.

Laiza and its surrounds are now constantly shelled by the Burma army’s 105 mm howitzers positioned at nearby Dawphoneyan as the army mobile columns under the command of Colonel Lin Lin Htun of TOC-1 of LID-88 are now preparing to assault Laiza.

Now, KIA Chief-of-Staff Major General Gan Shoung and his intelligence chief Khaung Moon led terrorist group in 1990 December 23th (at that time Gan Shoung was the Commanding Officer KIA No.(6) battalion ) gathered about forty-five (45) Villagers from Spot Ye Chaung Hmaw, Lonekhin, Sinetown- Pharkant Region and mercilessly killed the innocent victims. This atrocity was committed in front of all the people, each a person from a family of villages around pharkant Hmaw, the majority of victims were Shan nationals and minority were Kachin nationals.


Early in the morning motorboat headman U Myint Shwe (Karmine), U Khin Mg(deceased), U Kyauk(Militia), U Thein Naing (deceased), had been carried to the place of appointment made by major Gan Shaung with two motorboats. 24 detainees and 24 other who carried the detainees altogether 48 persons were roped at the crosses and shot with machine gun at the rate of twelve persons at a time, mercesly killed and thrown into the Oo Ru Stream. The terrorist KIA also recorded with video tape. Detainees from Lonekhin village, U Mg Gyi, U Chit Ko, Kauk Yoe Win Naing, U Chit Mg, U Chit Swe, were escaped by means of giving large amount of money to Major Gan Shaung.

All the eyes witnesses from the surrounding villages of Spot Chaung Hmaw region are still frightened the name of major Gan Chaung and they are still living at Myitkyina, Pharkant. By giving money to KIA and liberated villagers are still living. Those who witnessed the scene of crime committed by KIA are still suffering from terror of KIA .The relatives of the victims hated and bitter upon Major Gan Ghaung.

The above mentioned KIA No(2) brigade of No(6) battalion Commanding officer Major Gan Shaung (Now KIA Chief of Staff Major General Gan Shaung) is the person who committed the massacre. At the present , these are battles between government forces and KIA very heavily. We all the villagers are frightened and horrified. Major Gan Shaung is a person of very strong narrow nationalism and he is always building upon Shan Ni and Other national races. At the present he was commanding Chief of KIA fighting against government forces and all the villagers are still frightening the terrorist act of Major Gan Shaung. So, we humbly request the responsible person to take actions against such a cruel terrorist.

He is a racist hardliner among the KIA/KIO leaders and notorious as a ruthless killer after he massacred more than 100 Burmese and Shan villagers in a drug-related dispute with locals when he was the Commander of Sixth Battalion Second KIA Brigade in December 1990.

Gam Shaung’s deputy, Vice Chief-of-Staff General Gun Maw also is notorious for his sexual prowess among KIA’s so-called women warriors. Like late Moama Kaddafi of Libya our General Gun Maw has a troop of women bodyguards all pretty Shan girls plucked out from the Shan villages in KIA-controlled territory.

She was originally from the Sitarpu Ward in Myitkyinar and her family still live there. Her colleagues and friends including her boyfriend a young Kachin officer in the KIA didn’t like what happened to her, but they didn’t dare to say or do anything as they were all dead scared of Gun Maw and his thugs.

There’ll be no Peace till Gam Shaung and Gun Maw are gone!

While the civilian leaderships of KIA and other military leaders are willing to sit down and talk for a long-lasting peace between the Burmese and Kachin brothers the two top military leaders of KIA general Gam Shaung and Gun Maw do not agree with their colleagues and they didn’t even show up at the peace negotiation meetings in China to the dismay of senior Chinese cadres and military leaders who are sponsoring the peace process.

Despite the willingness of KIO Chairman Zaung Hara and other leaders to sign a peace agreement with Burmese the hardline stances of General Gam Shaung and his deputy General Gun Maw, both thuggish and despotic generals, have been prolonging this nasty civil war causing the indescribable sufferings of their own people. 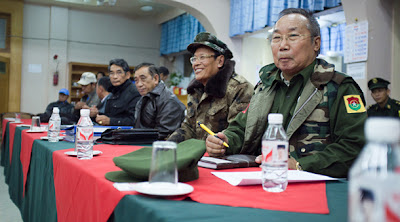