(Part of this post is News Articles direct from Xinhua and Myanmar Shipyards.) 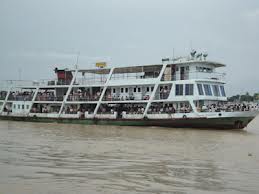 It was in late December 1980 when I had the taste of a dirty, noisy, and stinky shipyard called Dala Dockyards across the wide Rangoon River from the City of Rangoon.

I’d just graduated from RIT (Rangoon Institute of Technology) as a brand spanking new mechanical engineer and like most of my graduating classmates I tried to become a marine-engineer hoping that eventually I would end up on a sea-going ship outside Burma.

At that time in Burma under Evil Ne Win’s despotic Socialist-military rule the dollar was the king and anyone who could earn USD was top of the society that had been at dogs for nearly 20 years on the Socialist road to ruin.

So like everybody else I was dreaming of becoming a marine-engineer and earning USD. To fulfil that dream I needed a marine-engineering ticket called MOT Second Class Part-A issued by the Maritime Administration Department under the Ministry of Transportation.

To get that marine-engineer ticket as a RIT-graduate mechanical engineer I needed to have a six-month dock-service from one of the government dockyards in Rangoon and I ended up doing my volunteer service at the Dala Dockyards.

Actually I didn’t have to do anything dirty there as the Dockyard easily issued me a six-month-service certificate at the end of my six months there after I showed up myself there regularly at least once a week and signed in for six days a week that week on my time sheet.

(By then I was already working two jobs, one as  a workcharge-engineer at Irrigation and another one as a temporary-tutor at RIT.)

But I was amazed there that they were building all sorts of boats there with whatever meagre facilities they had. The dockyards then had no advanced MIG or TIG welders but only old stick or arc welders. Forget about robotic welders back then.

They had no profile cutters for thick steel plates but only the basic oxy-acetylene cutting sets. But they were still building sea-going ships there. And I was amazed even though I knew very well that Burmese are good boat-builders since thousands of years ago. Especially in the Irrawaddy Delta where I grew up almost every village has a skilled boat builder who could build a river-worthy sampan out of a few Kanazo planks in few weeks.

So I wasn’t really surprised when I started reading about Burma Navy building their own fleet of frigates at the Naval Dockyards in Rangoon. And our old Dala Dockyards now part of the government-owned ship-building enterprise called Myanmar Shipyards has been not just building ships but also exporting them.

Myanmar has made certain progress in ship building in recent years with the support of the government. According to figures published by the Myanmar Ministry of Transport, since 1995, the Myanma Shipyard (MS) under the ministry has successively built and delivered six vessels to marine companies of two Southeast Asian (SEA) countries.

Of the six vessels, two were exported to Indonesia which are a 38-meter-long sea pollution control vessel and a 29-meter-long pusher tug, while the other four were built for Singapore which are transporters having 50 meters, 55.5 meters, 56 meters and 63 meters in length respectively.

Official statistics also show that since 1988, Myanmar has built over 30 vessels for cargo and passenger services and imported over 100 passenger and cargo vessels to improve its inland water transport, of which 72 were imported from China' Yunnan Machinery Import and Export Corporation.

(Following is the News Article direct from the Transport Ministry’sWWW Site.)

Myanma Shipyards is capable of building sea-going, coastal and inland water vessels of up to 2000 tons dwt in accord with the international classification societies.

The Seagoing Vessels such as Tanker, Landing Craft, General Cargo, Patrol Vessel, Tug and the Riverie Vessel Such as Ferry, Landing Craft, Tug, Work Boat, Barge, etc have been built in Myanma Shipyards for local use.

In 1993, the first overseas contract from Yunnan Machinery Import and Export Corporation of China was received to built 9 nos. of 800 ton cargo barges used for Inland Water Transport of Myanmar. In additon, 4 nos. of shallow draft double deck passenger vessel were built in Myanma Shipyards for YMC & IWT.

The first export vessel, MV Aquatic Conserver, was built and delivered in 1995 under the Lloyd's Classifications for PT Cumawis Pte., Ltd. of Indonesia.

The second export vessel, MV Forceful Performer was built according to the ABS Classification and delivered to the Casey Marine Pte., Ltd. of Singapore in 1997.

In 2004, Myanma Shipyards built MY Sunshine, Sea Going Yacht, and delivered to the Corvette Shipping Ltd. of France. A pleasure craft MY.Seeadler was handed over to Moby Dick Co.Ltd. of Thailand in 2005.