(This post exposing the so-called journalist Francis Wade - a former DVB staffer now writing anti-Burmese-Buddhist and pro-Bengali-Muslim rants full-time for Asian Correspondent and Islamic TV Al-jazebra - is partly based on David Obama’s critical article from the blog “Democracy for Burma” posted on 22 June 2012.)

Following the well-trodden path of the likes of notorious Burma-hater Bertil Lintner and that Burmese-traitor Dr. Zar Ni, the so-called freelance journalist Francis Wade has been quite busy trashing our beloved Burma for a while now.

His anti-Burmese-Buddhist (and) pro-Bengali-Muslim rants are the favourite fables of Qatar-based Islamic media organization Aljazebra (the unofficial mouthpiece of Al-Qaeda Islamist terrorists) and that slanted internet-media-site called The Asian Correspondent.

Following list of slanted news articles are just some of his totally-unbalanced articles (and their respective publishing dates) on that biased-media-site Asian Correspondent against our country Burma and our people the Buddhist-Burmese last few years.

Our little-man-journalist has been extremely busy churning out aggressively anti-Burma so-called news articles for the Asian Correspondent (nearly every month of last two years as there are many more on the Al-jazebra, DVB, and Irrawaddy) as if someone or some clandestine organizations with ulterior motives have been secretly and aggressively funding both of them.

So who really is Francis Wade and why is he relentlessly doing what he’s been doing (writing anti-Burma, anti-Buddhist, and pro-Muslim-Bengali slants as seemingly-journalistic articles) last three years? 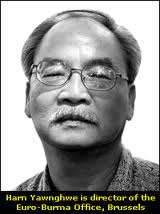 
Harn Yawnghwe’s EBO (Euro Burma Office) has been happily cooperating with Saudi Arabia’s Jeddah based OIC (Organization of Islamic Cooperation) the second largest International organization in the world after the United Nations.

And Harn Yawnghwe is personally receiving considerable funds and other assistance from the OIC to further the so-called Rohigya cause by exploiting alledged human rights violation in Burma against illegal Bengali Muslims.


Recently, a non-Burmese writer and a friend of Burma David Obama has accused Mr. Francis Wade as a well-hidden member of the pro-Bengali-Muslims conspiracy generously funded by the likes of Saudi Arabia and the international Muslim mafia (OIC) to rapidly islamize northern Arakan first and then the whole of our Buddhist Burma.

(Please kindly read all related posts at the links provided at the end of this post and you’ll thoroughly understand the powerfully Islamic conspiracy relentlessly attacking our Burma.)

Following is the extracts from that Daivd Obama’s article “A Friend’s Appeal to Britain and United States” from the blog “Democracy for Burma” on 22 June 2012.

“I would like to highlight here that the son of the first President of Burma Sao Shwe Thaike, Harn Yaung Wai, established The Euro-Burma Office (EBO) in Brussels to sell Burma for money. He is one of the most responsible persons bringing alien Rohingya Bengalis into Burma crisis. He had pledged to his Arab funders (Saudi Arabia and IOC) that if he cannot do Rohingya to belong to the Burma indigenous races, then he won’t live anymore and commit suicide.

In Europe, the son of the (Burma’s) first President Sao Shwe Thaike, Harn Yaung Wai, is promoting Rohingya Bengali terrorists as if part of Burma crisis by using his DVB news media as a propaganda tool in addition to appointing a story writer named Francis Wade for doing media propaganda for so-called Rohingya Bengali.

In United States, Aung Din and his group US Campaign for Burma (USCB) are selling Burma for money and betraying Arakan by portraying Arakan as the villains and so-called Rohingya Bengali as the victims but in reality it is other way round.

In UK, Mark Farmaner of Burma Campaign UK and his second wife Zoya Phan are fiercely promoting so-called Rohingya Bengali for money while their boyfriend, Benedict Rogers of Christian Solidarity Worldwide, is mimicking whatever Burma Campaign UK is telling lies and self-praise no-grace Maung Zar Ni is promoting so-called Rohingya as if they are his son-in-laws.

In Thai-Burma border, Soe Aung and Naing Aung of the Forum for Democracy in Burma (FDB) are supporting Bengali Rohingya after receiving funding under the name of human rights and equality.

In ASEAN, Soe Aung’s wife, Debbie Stothard, a Malaysian Chinese who knows nothing about Burma is blindly shouting for Rohingya by representing a group called ALTSEAN comprising of her and Arrr herself. Their boss is Mark Farmaner of Burma Campaign UK (BCUK) and BCUK boss on Rohingya issue is Chris Lewa of Arakan Project. You can see clearly that this is coordinated and planned plot to colonise and Islamise Burma.

In reality, the BOSS of all Rohingya campaigners is Chris Lewa, the Director at the Arakan Project who has been lobbying for so-called Rohingya for decades. Even though Chris Lewa is seeking funding with the Arakan Project but that person has never ever been working for Arakan people but been working for Rohingya people under the name Arakan Project. This is depressing, isn’t it?”
Chris Lewa’s very secretive Arakan Project’s main financial sponsor is Harn Yawnghwe’s EBO which is alleged to have five years sponsorship worth 50 million Euros from Saudi Arabia through OIC to put concerted political pressure on Burma (Thein Sein and Aung San Suu Kyi) to rid of Burma’s 1982 Citizenship Act and give Burmese citizenship to all illegal Bengali-Muslims (so-called Rohingyas) by the Bangladeshi border and then some millions more Bengali-Muslims from Eastern Bangladesh by the year 2016-17.

(That pro-Muslim Tomas Quintana - the UN Special Envoy on human rights in Myanmar - did exactly what that Shan Traitor and Saudi Arabia’s OIC really want it all along by strongly – and inappropriately by interfering with a sovereign state’s domestic affairs - stating that “ I therefore reiterate my recommendation to Parliament that the 1982 Citizenship Act be amended to ensure that all persons in Myanmar have equal access to citizenship and are not discriminated in such access on grounds of ethnicity or religion.” On 16 February this year after his recent Burma trip.)

Based on the available evidence my conclusion is that our so-called journalist Mr. Francis Wade is just a mere cog in the well-oiled enormous Islamic conspiracy machine running against our Burma and us Buddhist-Burmese.

Dear non-Burmese readers and fellow Burmese, I have rested my case for exposing Mr. Francis Wade’s true dark-underbelly. As intelligent human beings you can draw your own conclusion on our dear friend so-called journalist Mr. Francis Wade and his true professional identity as one of many Harn Ywnghwe’s paid-provocateurs!