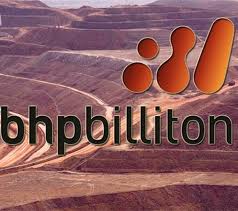 BHP Billiton chief executive Marius Kloppers will stand aside in May, after the company's profit halved.
The world's biggest miner posted a 58 per cent fall in first-half net profit to $US4.24 billion, while the company's underlying earnings - which excludes one-off write-downs and gains - dropped 43.4 per cent to $US5.68 billion.
The result came in broadly in line with average analyst forecasts of a $US5.72 billion underlying profit, according to a Bloomberg survey. BHP Billiton's revenue fell 14 per cent compared to the same period a year earlier to $US32.2 billion, as commodity prices generally softened.

The company says its profit was squeezed not only by the fall in commodity prices, but also due to the strength of currencies in major producing nations such as Australia and Chile, which pushed up local costs.
However, the company says it is moving to contain costs, and also announced or completed $US4.3 billion in asset sales in the half-year to December 31. BHP Billiton also says it expects a "modest improvement in the global economy" over the next 12 months as stimulus stabilises China's growth and the US economy makes steady progress.
However, this rise in growth is likely to be offset by an increase in the supply of key commodities as new or expanded mines come online, limiting upside in commodity prices. BHP has been part of this increasing supply, with the company undertaking 20 new projects, most of which are expected to enter production before the end of the 2015 financial year.
Kloppers Steps Aside
Today's announcement that Mr Kloppers will step aside from the company's top job on May 10 has ended months of speculation about when BHP Billiton would install a new leader.
The mining giant's new chief executive will be the company's current head of non-ferrous Andrew Mackenzie, who joined BHP Billiton in 2008, after previous experience working with BP and Rio Tinto.
Mr Kloppers has been in the top role for around five-and-a-half years and with BHP Billiton for almost 20, and will stay with the company until October 2013 to assist with the transition. BHP Billiton chairman Jac Nasser says Mr Kloppers has made the company safer and stronger.
"Marius was appointed chief executive just prior to the global financial crisis. Despite an exceptionally difficult economic environment during his tenure, Marius and his team have delivered for shareholders, significantly outperforming our peers in terms of total shareholder returns," he said in a statement.
"He drove new investments into next generation opportunities including US onshore gas and liquids and created one of the most valuable companies in the world."
No Surprises 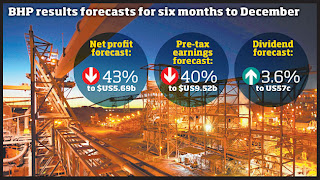 BHP Billiton shares have not moved much in early trade in response to either the profit results or the departure of Mr Kloppers - on the Australian market, its shares were down 0.4 per cent to $38.84 by 10:25am (AEDT), with much larger falls for rival miners such as Rio Tinto which was down 1.2 per cent.
Fat Prophets commodities analyst David Lennox says that is because BHP's profit was in line with analyst expectations. "Overall, I think the market won't be in any way surprised by the results that they have seen," he told ABC News Online.
However, Mr Lennox says the timing of the leadership transition was probably somewhat earlier than many expected. "It was, perhaps, a little bit of a surprise," he said.
"We were aware that BHP had activated a succession plan to look at eventually replacing Mr Kloppers as CEO, and we do think that there may have been a little [more] time for that particular plan to be executed."
Mr Lennox says Marius Kloppers's departure was under very different circumstances to that of former Rio Tinto boss Tom Albanese.

"There were very good reasons I guess for Tom Albanese to stand aside, and that was basically the $14 billion in write-downs out of the balance sheet, I guess a CEO can't preside over a company and lose that quantity of value out of his balance sheet," he explained. "For BHP there's no such circumstances, the write-downs were very controllable, very manageable."
However, fund manager Roger Montgomery says Marius Kloppers has also been successful at destroying shareholder value in different ways.
"In 2006 the company earned $13.6 billion.Â In 2013 analysts estimate earnings will be $13.8 billion and, despite the fact there has been no net growth in profits, investors have contributed massive amounts of additional equity - from $32 billion in 2006 to $64 billion in 2012 and debt has risen from $12.9 billion to $27.6 billion," he wrote in a note on the results.
"In other words BHP is significantly less profitable than it was in 2006." 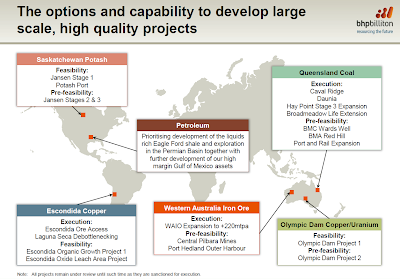