(Since bloody John Howard took away guns from Australians just after 1996 Port Arthur Massacre Australian society is like a herd of sheep waiting to be slaughtered. Now Julia Gillard's Socialists are  quietly opening the borders and letting thousands and thousands of Muslims with disturbingly questionable characters boat into Australia. The butchers have arrived! Hasn't the slaughter started? The young white girl from Macquarie University was just lucky to be still alive. First part of this post is direct from The Australian News on 23 February 2013.)

EIGHTY asylum seekers will be questioned by police hunting a man over an alleged sexual assault on a female student at Macquarie University as concerns are raised over housing asylum seekers in student accommodation.

Students were furious yesterday after the alleged early morning sexual assault on the student, 20, in the university's accommodation village, which also has been housing asylum seekers in adjacent units when student demand dries up.

As Immigration Minister Brendan O'Connor went to ground and declined to comment on the issue, opposition immigration spokesman Scott Morrison accused Labor of dumping asylum seekers into communities without consultation after failing to stop the flow of boats.

Police said they were hunting an intruder who allegedly broke into the apartment - shared with four other females - about 3.20am yesterday, indecently assaulting the sleeping student and fleeing when she awoke, screaming.

The man was described as being aged 20-25, with a thin build, dark skin and dark short curly hair. The Red Cross, Macquarie University and accommodation operator Campus Living Villages yesterday attempted to hose down suggestions the perpetrator was an asylum seeker, insisting they had no evidence that was the case.

But it emerged the village was a participant in the government's taxpayer-funded, Red Cross-run program, housing asylum seekers for stays of up to six weeks under the bridging visa scheme.

The victim's townhouse is surrounded by units housing asylum seekers, with up to five people in each unit and about 900 residents in the village. Students, including a friend of the victim, said they were afraid of the asylum seekers.

"Why would the uni put a house full of girls next to asylum seekers?' There are so many other places they could live," the friend said. A first-year female student, who arrived this week from the US, said she felt intimidated. "(Police) will speak to as many people as they can, and I am sure that group of refugees will be among them," a police spokesman said.

The story was broken by 2GB's Ray Hadley, who demanded answers from the government about why the university was doubling as "some sort of a quasi-detention centre". Mr Morrison said it was clear the government could not cope with the continuing flow of asylum seekers. "The government has no idea where all these people are," he said.

The Department of Immigration directed inquiries to the Red Cross. A Red Cross spokeswoman said: "There is no suggestion at this time by police that a Red Cross client is connected with this incident."Mr O'Connor's spokeswoman said it would be inappropriate to comment given the police investigation.

(Second part of this post is direct from The Australian News on 22 February 2013.)

RADIO announcer Ray Hadley has called on the Federal Government for a detailed report and explanation after he revealed 80 asylum seekers have been living inside the grounds of a Sydney university.

On his radio show this morning, Hadley said approximately 80 Sri Lankan men were living at student accommodation inside Macquarie University. "In the grounds of the university there are two dorm buildings housing young women - those dorms are surrounded by the dormitories containing the 80 Sri Lankan men,'' Hadley said.

"According to people I've spoken to at the university, the young women feel both intimidated and frightened by having the men in close proximity. Some are in fact scared and conveyed that to police officers on the scene yesterday.''

NSW Police today confirmed officers were investigating reports a man indecently assaulted a female university student while she was sleeping in her dormitory. Detectives have been told a 20-year-old woman was asleep in her dormitory when a man broke into her room and indecently assaulted her about 3.20am yesterday. The woman awoke during the incident and the man fled the scene.

The man is described as 20-25 years old, thin build, dark skinned, with dark short curly hair. He was wearing no t-shirt and a pair of grey coloured tracksuit pants. Hadley has called on the Immigration Department to provide a report into why the university was doubling as "some sort of a Quasi detention centre".

Macquarie University officials later confirmed the grounds are being used to house asylum seekers. A statement released by the facility said the Macquarie University Village, which is owned and operated by the independent Campus Living Villages, made an agreement with the Red Cross' Asylum Seeker Assistance Scheme to provide temporary accommodation for refugees.

"The university considers the presence of refugees at the Macquarie University Village a matter for Campus Living Villages and for the Department of Immigration and Citizenship,'' the statement read. "Our concern is to ensure the welfare and safety of our students. We have provided ongoing counselling and security support to the student and broader campus community. "

It is not known yet whether one of the 80 Sri Lankan asylum seekers is responsible for an indecent assault on a female student, but the attacker has been described as a "dark skinned male". 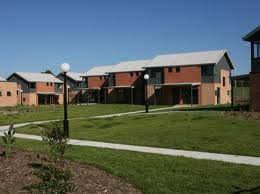 Female students living in the student accommodation at Macquarie University Village are outnumbered by single male non-students who have arrived in Australia by boat to claim they are refugees and are being housed in the same accommodation.

These men are stalking and attacking the young female students living in Macquarie University student accommodation.

This situation is extremely dangerous we are just waiting for the next girl to be attacked. I want to warn everyone about what is happening inside Macquarie University Village student accommodation.

We don't know what to do we have already paid in advance. It is terrible.

POLICE charged a Sri Lankan asylum seeker yesterday over the alleged indecent assault of a university student, as it emerged the federal government has given the Red Cross $265 million for asylum seekers.

The 21-year-old was on a bridging visa, immigration officials confirmed after he was arrested near Central Station at 10.15am. He was later charged with aggravated break and enter and aggravated indecent assault.

It was revealed yesterday that police were not called by Macquarie University after a 20-year-old student was allegedly attacked in campus accommodation last Thursday. There were 55 asylum seekers living in the student accommodation at the time of the attack. Asylum seekers have also been placed at the University of Western Sydney by the Red Cross, but those at Macquarie will leave by the end of next month, it was announced yesterday.

The charged man was believed to be visiting other asylum seekers at the campus but did not live there. A security guard arrived at the housing block within minutes of the 3.20am incident but failed to call police, with the company which manages the accommodation declining to answer questions about the specific time police were called.

Asylum seekers will no longer be housed at Sydney's Macquarie University, the company that runs its campus accommodation says. The statement from Campus Living Villages (CLV) comes a day after a Sri Lankan asylum seeker faced court charged with the indecent assault of a 20-year-old student at Macquarie University on February 14.

CLV told AAP the current arrangement with the Red Cross to provide asylum seekers with accommodation at the university would be discontinued. "CLV and Red Cross are working together to transition Red Cross clients out of CLV facilities," the company said in a statement. "The safety, security and well-being of all our residents is the top priority at all CLV villages."

The immigration department refused to comment on the matter but News Ltd reported that asylum seekers from student accommodation at Macquarie University had been relocated to a commercial building in Parramatta.

Daxchan Selvarajah, 21, was charged with indecent assault of the student and two counts of aggravated breaking and entering with intent to commit an indictable offence. The immigration department has said the man is an asylum seeker on a bridging visa, but was not living in student accommodation at Macquarie University at the time of the alleged attack.