Even though Shans in Thailand are a very large native-ethnic group they seem to be quite docile and happy being slowly turned into Thais by the dominant Thais.

Totally unlike their cousins in Burma where they have been waging war after war against the Burmese majority to keep their racial and cultural identity intact. And even for a separate independent Shan nation as their ultimate political goal seemingly backed by the Thais.

I’ve always wondered what’d happened to the Shans in Thailand for them to be contented with just being affectionately called Thai-Yai (Big Thai) while completely surrendering their ethnic identity to the Thai majority. Then I discovered from my favourite blog the New Mandala about the 1902 Shan Rebellion and how the poor Shans in Thailand were brutally Siamized at the beginning of 20th century.

(Shans were the predominant inhabitants in the northern part of Thailand - then known as Siam – till the very end of nineteenth century. In July 1902 Shans dreaming of establishing an independent state in northern Thailand rebelled against the Thais ruling them with an iron fist from faraway Bangkok. But the Thais - then known as Siamese - ruthlessly crushed the rebellion and brutally slaughtered the Shans there and by September 1903 the now-completely-forgotten Shan Rebellion was over.) 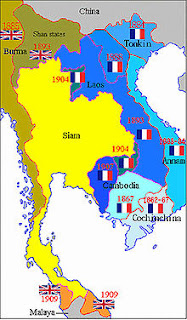 And, in heightening the bureaucratic anxieties of officials in Bangkok, the rebellion hastened the development of modern administrative structures and the displacement of traditional authorities. Some have also argued that the rebellion had an important impact on the shape of Thailand’s economic development – encouraging state investment in railways (to facilitate the rapid movement of troops) rather than agricultural infrastructure.

An under-explored aspect of the rebellion is the implications it had for regional geopolitics, particularly the ongoing manoeuvrings between the Siamese, French and British on the upper-Mekong border. Recently, I have been working on French colonial documents dealing with the Shan rebellion. One particular set of documents has caught my interest.

In December 1902 a package of letters was seized by French officials in the far north of Laos (near Luang Nam Tha, I think). The letters were sent to various chiefs in Sipsongpanna, by a Phaya Lassavong who was temporarily based in a village across the Mekong from the town of Chiang Khong. Phaya Lassavong was a “mandarin of Sipgonspanna” who had travelled to Siam and seems to have been involved in the early stages of the Shan rebellion.

By September 1902 (along with a many other retreating Shan) he had arrived in the vicinity of Chiang Khong. The captured letters, written in October and November, were addressed to the king of Chiang Rung (Jinghong) and to the chiefs of various other towns in Sipsongpanna.

Lassavong informed the notables in Sipsonpanna about the revolt of the Shan, the oppression of the Siamese, and the retreat of the Shan to Chiang Khong and to French territory on the left bank of the Mekong.  He foreshadows a new attack by the Shan in January 1903 and implores the king of Chiang Rung, and the many lesser chiefs, to send 500 troops to help fight the Siamese.

Optimistically he suggests that they will be fighting alongside the French in their battle with the Siamese. He also says that the troops will enable him to bring many Lu families back to Sipsongpanna.

Alarmed by the diplomatic and security implications of the letters, the French moved quickly to arrest Lassavong. After some unsuccessful night-time raids, he was eventually captured, along with his son, after a short skirmish with guns and sabres.

The prisoners were taken to Muang Sing. Lassavong’s son was alleged to be a “most dangerous bandit.” There were reports that he had murdered the son of the chief of Nan, and stolen a valuable ring after cutting the finger that bore it off his body. 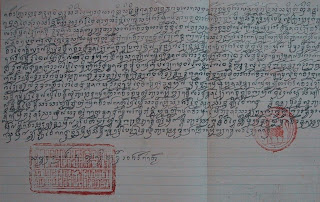 French authorities in Muang Sing took action to prevent the incursion of any “armed gangs” across the border from Sipsongpanna. Lassavong was forced to write a letter to his northern allies, stating that if any attempt was made to rescue him, both he and his son would be executed immediately. Plans were made to put him on trial before the royal court of Muang Sing and to send his son back to Nan to be handed over to Siamese authorities.

I am still trying to find out what ultimately happened to them.

I have copies of the letters written by Phaya Lassavong (one of them is in the image above). If there is anyone willing and able to translate them for me, I would be delighted to hear from you!

In 1902, a hundred years ago, as you read this fable, whispers of trouble were rippling through the north of Thailand. Resentment was growing against the take-over of power from the traditional rulers (Shan Sawbwars) by Commissioners from Siam and the harsh collection of new taxes by corrupt officials from Bangkok.

D.F. Macfie, long manager of the Borneo Company, kept a detailed record of the comings and goings of farangs - missionaries excluded - from 1884 to 1919. His laconic comments in the years 1902 and 1903 give little information on the stirring events of the rebellion: 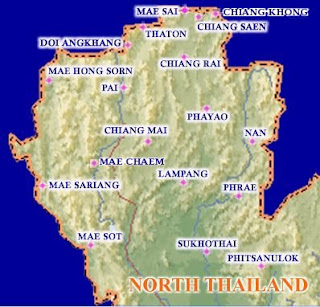 By 1900 there were many thousands of Shans working in the north of Thailand, mostly in the teak forests, some in the ruby mines at Long near Phrae. They were harassed by the Siamese officials and taxed to excess - on tobacco, pack animals, boats, even on their own pigs. The last straw was a four rupee poll tax that was meant to replace corvee or forced labour, but didn't.

All the Shans originated from Burma and were therefore British citizens. This meant that they could be tried in extra-territorial or Consular Courts - hence the establishment of British Consulates in Chiang Rai, Nan and Lampang in addition to Chiang Mai. When the rebellion broke out, the British were consequently deeply involved.

A gang of Shan decoits had taken refuge in the ruby mines and the Gendamerie were sent in to arrest them. They were ambushed and many were killed. The Shans, realising that they had burned their boats, next attacked Phrae, murdering all the Siamese they could catch and forcing the unfortunate hereditary ruler to join them.

Jubilant after their success, the Shans planned - and there were only some two or three hundred of them - to drive the Siamese from the north and set up an independent state based on the Lanna kingdom of old. They next decided to attack Lampang.

L.T. Leonowens, son of Anna (from famous King and I story), was the preeminent farang in the city. A personal friend of the chao, he was, at this time managing his own teak business. He took it upon himself to organise the resistance. He evacuated the women and children, mustered the levies and built barricades across the main roads of access. 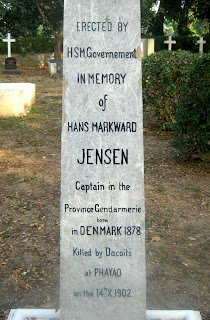 Just in time, H. Markvard Jensen, a Danish Captain of the Gendamerie, arrived with a few men from Chiang Mai. They easily routed the rebels. The battle of Lampang was over.

T.H. Lyle, British Vice-Consul at Nan had by now arrived in Lampang and he set about contacting the various Shan groups urging them to disarm and go back to Burma. He fully sympathised with their grievances but feared, with every justification, the vengeance of the Siamese who were now marching north with a large army under the command of Field Marshal Surasak.

These were the three foreign heroes of the Shan Rebellion. Shortly afterwards Captain Jensen was killed by a chance shot when pursuing the rebels near Phayao - a memorial was erected near where he died and another one in the Chiang Mai Foreign Cemetery.

W.R.D. Beckett, the British Consul at Chiang Mai, did not come out of the affair so well. He firmly stayed in Chiang Mai improving the fortifications and stocking up on food and other supplies. He should, Leonowens thought, have gone to meet the rebels, who were British citizens, instead he left that dangerous job to his junior.

Surasak arrived and for months the destruction of the rebels, and many innocent Shans and Lao (as all the northern people were called at this time) was ruthlessly carried out. It was not until September 1903 that the rebellion was officially declared to be over. Heavy- handed the Siamese certainly were, but the north (and the Shans) never again defied the rule of Bangkok.