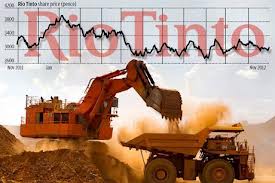 RIO TINTO POSTS FIRST LOSS, PAYS NO MINING TAX. Rio Tinto has posted its first loss under its current corporate structure after recently writing $US14.4 billion off the value of some of its assets.

The world's third biggest mining company reported a $US3 billion loss for 2012, down from a $US5.8 billion profit the year before. However, the loss was due to $US14.4 billion worth of write-downs in the value of its aluminium and coal businesses.

Excluding those one-off write-downs, Rio recorded underlying earnings of $US9.3 billion, which is down 40 per cent on last year's underlying result, but slightly ahead of average analyst expectations which centred on a result around $US9.1 billion.

The size of the write-downs, particularly those related to Rio's recently acquired Mozambique coal project, saw the departure of Tom Albanese as the company's chief executive. His replacement Sam Walsh, the former head of Rio's Australian iron ore operations, says he will be more conservative about new projects and acquisitions.

"I intend to strengthen the existing management systems, bringing greater rigour to internal challenge and debate, greater clarity and accountability to decision making, and clearer line of sight to the critical business issues that exist across the organisation," he noted in the company's report.

"We are reinforcing our capital allocation processes, and will only invest in assets that, after prudent assessment, offer attractive returns that are well above our cost of capital, and which offer a superior return when compared to returning cash to shareholders."

Mr Walsh has also reiterated the company's plan to slash costs at its existing mines.

"Throughout 2013 and 2014 we will seek to enhance margins at our existing businesses by unlocking substantial productivity improvements, aggressively reducing costs and better managing our sustaining capital," he said.

"We are targeting cumulative cash cost savings of more than $US5 billion to be achieved over the next two years, equivalent to an annual run rate of $US3 billion by 2014, assuming stable market and operating conditions, with significant additional cash savings in sustaining capital expenditure and exploration and evaluation spend." 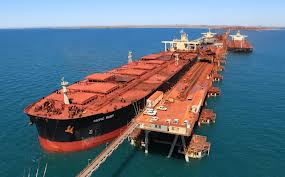 Mr Walsh also told reporters that he was aware of the controversy about Australia's Minerals Resource Rent Tax (MRRT), which raised only $126 million in the six months to the end of December, well off a previous Treasury forecast of $2 billion.

For the first time, Rio Tinto has confirmed that it did not pay MRRT in 2012. "Given that the MRRT is a tax that kicks in when prices are high, you certainly won't expect to have an MRRT liability when commodity prices are low," Mr Walsh said. 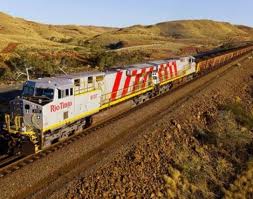 Rio's boss says the tax is functioning as it was designed, which is to tax "super profits" not "normal profits", and the company was already paying its fair share.

Despite Rio's fall in earnings, it has increased its total dividends for the year by 15 per cent to $US1.67 a share, fully franked, ahead of analyst expectations which were for a dividend around $US1.60.

Rio's final dividend will be 94.5 cents fully franked, up from 91 cents last year.