(News Article direct from The Huffington Post on 5 February 2013.)

COPENHAGEN, Denmark -- A gunman tried to shoot a Danish writer and prominent critic of Islam on Tuesday, but missed and fled after a scuffle with his intended victim, police and the writer said.

Lars Hedegaard, who heads a group that claims press freedom is under threat from Islam, told The Associated Press he was shaken but not physically injured in the attack at his Copenhagen home.

Police said they were searching for the suspect, whom they described as a "foreign" man aged 20-25.

Hedegaard, 70, said the gunman rang the doorbell of his apartment building on the pretext of delivering a package, and when Hedegaard opened the front door, the man pulled out a gun and fired a shot that narrowly missed the writer's head.

"The bullet flew past my right ear, after which I attacked him and punched him in the face, which made him lose the gun," Hedegaard told AP. He said the gunman then fled.

In 2011, he was convicted of hate speech and fined 5,000 kroner ($1,000) for making a series of insulting and degrading statements about Muslims. Denmark's Prime Minister Helle Thorning-Schmidt condemned what she called a "despicable" act.

"It is even worse if the attack is rooted in an attempt to prevent Lars Hedegaard to use his freedom of expression," she said. Hedegaard has expressed support for a range of outspoken Islam critics in Europe, including Swedish artist Lars Vilks and Dutch lawmaker Geert Wilders.

"Failed attack on my friend and Islam critic Lars Hedegaard in Denmark this morning. My thoughts are with him. Terrible," Wilders tweeted. The Free Press Society said it was "shaken and angry," but "relieved that the perpetrator did not succeed."

Several Scandinavian writers, artists and journalists have been exposed to threats and violence from extremists since the 2005 publication of Danish newspaper cartoons of the Prophet Muhammad triggered an uproar in Muslim countries.

Many Muslims believe the prophet should not be depicted at all – even in a flattering way – because it might encourage idolatry In 2010, a Somali man living in Denmark used an ax to break into the home of one of the cartoonists, who escaped unharmed by locking himself into a panic room.

Last year, four Swedish residents were convicted of terrorism in Denmark for plotting a shooting spree at the newspaper that first published the Muhammad caricatures. In Sweden, Vilks has lived under police protection after a drawing he made depicting Muhammad as a dog led to death threats from militant Islamists. 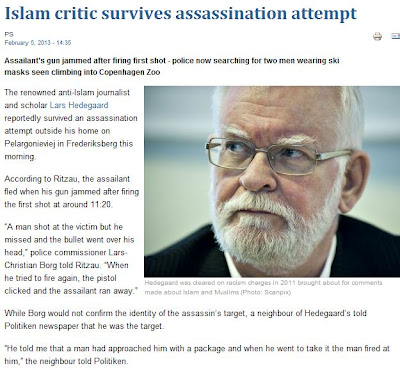 ‘Girls in Muslim families are raped by their uncles, their cousins, or their fathers,’ and ‘When a Muslim man rapes a woman, it is in his right to do so,’ were among the comments Hedegaard  made during an interview with the author of snaphanen.dk.

The Eastern High Court later fined Lars Hedegaard, the president of the Free Press Society, 5,000 kroner for making that so-called racially offensive comments in December 2009. That decision overturns a decision in January by the Frederiksberg District Court, which stated that while it found Hedegaard’s comments to be insulting, Hedegaard did not know that his controversial comments would be made public. 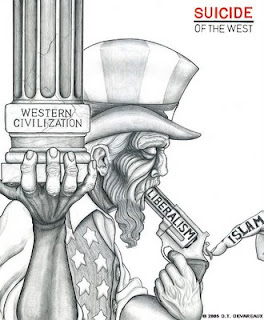 Last week Hedegaard published a book titled “Muhammeds Piger” (Mohammed’s Girls), in which he writes about issues such as discrimination in Islam and that the belief in predestination. “Everyone is subject to Allah’s will, but he treats them differently – without stating any other criteria for the discrimination other than his own will,” the book reads.

Hedegaard says, “my counsel has instructed me that in cases brought under Article 266b, the only thing that determines whether one is convicted or not is a matter of the perceived insult whereas one is barred from proving the truth of the statement.” The article deals with public statements whereby a group of people are “threatened, insulted or degraded”. But as my lawyer has already noted, I have made no public statement.

"When it comes to Article 266b, there is no equality before the law. I am daily insulted and degraded by something I read or hear and I am sure that most people have the same experience.

For example, I am not only insulted and degraded and threatened, but shaken to the core of my being when I hear a well known Danish imam state that, of course, sharia law – Muslim law – will be instituted as Denmark’s official legal regime when there are a sufficient number of Muslims.

I strongly urge our country’s jurists to get acquainted with the implications of the sharia, not only for Muslims but equally for non-Muslims, who – if they are lucky – will be reduced to a life as subhuman outlaws.

And if one cannot be bothered with tedious dissertations, one may take a look at the legal order pertaining in areas where the sharia holds sway either de jure or de facto. One will then encounter a legal order the like of which we have not known since the passing of the Law of Jutland in 1241 and probably not before.

But the imam wants this disorder introduced in the country where I was born. And I must admit that I am troubled. I am also troubled when said imam defends the killing of Muslims who have left Islam and when he confirms that women and men guilty of fornication must be pelt with stones until they are dead. He thinks that is God’s commandment, which he cannot ignore."