Illegal Mosque Being Dismantled by Buddhists in Rangoon!

The new racio-religious near-riots in Rangoon’s impoverished-township of Tharketa was simply started by heated arguments between the protesting Buddhist Burmese women and a Muslim Bengali woman whose house has been slowly and illegally transformed into a Arabic-language-Madrassa-cum-Mosque.

The near-riots began at about 11 in the morning of 17 February and the dismantling of the illegally-constructed mosque by the about one thousand Buddhist-Burmese was finally stopped by more than 30 riot-police arrived in three police pick-ups at about 3 in the afternoon the same day. At the time of reporting the crowd was still there and growing by the minute.

The mosque construction site was at the rear of an ordinary residential dwelling between 18th and 19th streets of Manpyay Ward No-3 in Tharketa Township. For some years an Arabi-madrassa for Muslim youths was illegally operating there without any necessary permits. And a year ago the Muslim-Bengalis tried unsuccessfully to get permission from RCDC (Rangoon City Development Committee – the municipal government) to build a mosque there.

According to the Ward-administrator of No-3 Ward the Muslims started building the illegal mosque by erecting a blocking high fence around the block and slowly raising the height of the building to three stories.

The local Buddhist-Burmese reported to the RCDC and the municipal government has since taken a stern action against the said mosque. They instructed the house owner a Muslim-Bengali named Than Tin to stop the construction by February 14 and to begin the dismantling process by February 17. 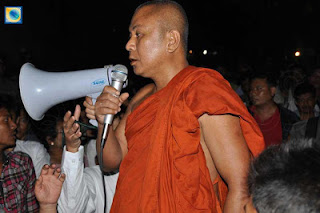 “But the Muslim-Bengalis have refused to obey the RCDC’s order and thus the local Buddhit-Burmese have taken action and began the dismantling of the illegal mosque themselves,” explained U Wirathu the prominent anti-Muslim activist Buddhist monk now at the site.

The respected monk also added that like many other illegally-constructed mosques all over Burma funded by the likes of Saudi Arabia and OIC the Tharketa illegal mosque is revealing a large concrete basement and hidden underground concrete-bunkers (for storing weapons, ammunition, and explosives) like a fortified-military-camp.

No wonder many in the West are now calling the mosques Islamic beachheads ready to wage jihadist wars against non-Muslim infidels and definitely not the nice places for peaceful religious purpose.


Too Many Mosques and Madrassas in Burma already!


According to a survey done last year our predominantly-Buddhist Burma now has 2,266 mosques  and 759 Arabi-madrassas for less than 3 millions of Muslim population. Stark contrast to the sad fact that 400,000 Buddhists in Saudi Arabia has zero Buddhist monastery or temple there.

The popular joke that Saudi Arabia will give one million US dollars to build a mosque and madrassa if there are just two Muslim families in any town or village of Burma doesn't seem like a joke at all as over-generous supply of Saudi petrol dollars has been the only reason (apart from the rabbit-like-breeding of Muslims in Burma and neighboring-Bengladesh) behind the mushrooming of mosques and madrassas in our Buddhist Burma.

As long as Saudi Arabia keeps on brutally beheading the Buddhists caught practising their religion, and blindly banning the building of Buddhist religious places there Burma should retaliate and at least ban the building of any new mosque and madrassa in Burma.
Public Denial by the Bengali-Muslims in Rangoon 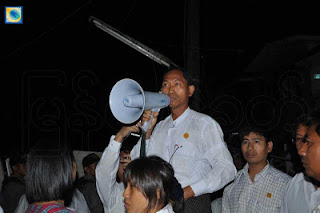 Than Tin the Bengali-Muslim owner of the house and the president of MMNO (Myanmar Muslim National Organization) publicly denied in the late afternoon of February 17 that the building was a mosque. He said the large building being built behind his small house was just an Arabic language school for the local Muslim youths.

But he admitted that he was now being forced by the Tharketa Township Administrator Thein Min to sign the acknowledgement for receiving the RCDC’s stop-work order. He then added that he was also being forced to dismantle the controversial mosque from February 17 by Ngway Soe Thaung the Assistant Departmental Head of RCDC’s Building Department. 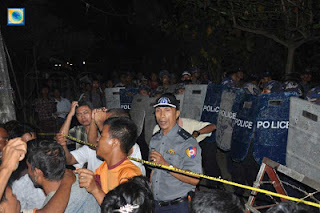 According to many locals their township has been swamped by the illegal Bengali Muslims since they started arriving from Maungdaw by the Bangladeshi border about 15 years ago and setting up illegal residences with the help of corrupt local immigration officials.

"Now the township is disturbed by the daily (and somedays) hourly amplified-calls to prayers from the loud-speakers of many illegal mosques," complained bitterly a local school teacher. The normally quiet Buddhist-suburb is quickly becoming a flash-point as anti-Islam feelings and resentments reach a feverish level. 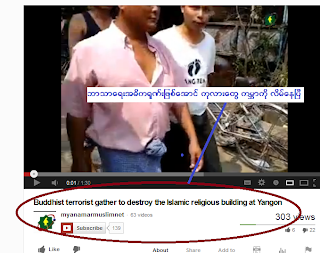 One of the prominent Muslim leaders in Burma Tin Maung Than has threatened to call for international Islamic protests against Buddhist-Burmese and also started calling for a jihad against Burma.

According to the news reports Tin Maung Than was also the main member of the clandestine committee for construction of as many illegal mosques as possible in Burma with the generous funding from the likes of Saudi Arabia and OIC.

His group has already posted a doctored video claiming the accused destruction of their mosque by the unruly  mob of Burmese Buddhists on You Tube.