(News Article direct from The BLITZ on 6 September 2012.) 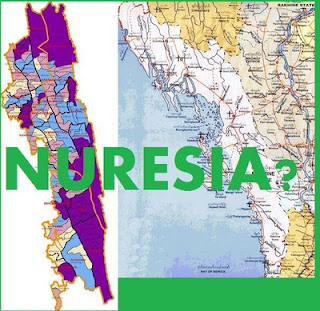 (To cloak their terrorist operations with seemingly-legitimate Islamic political activities one and half a dozen Rohingya militant groups have formed the ARU - Arakan Rohingya Union - with the initiatives of Shan traitor Harn Yawnghwe’s EBO - Euro Burma Office in Brussels - and the International Islamic Mafia OIC - Organization of Islamic Cooperation - at the OIC’s Jeddah HQ in 30-31 May 2011.)

With the target, these Jihadist terror outfits are intensifying activities within Chittagong, Rangamati, Bandarban and Cox's Bazar districts, which are bordering areas of Myanmar [Burma].

According to intelligence reports, the Jihadists are planning to establish an independent Sharia state named 'Nuresia' with its territory expanded into Chittagong, Rangamati, Bandarban and Cox's Bazar districts in Bangladesh and the entire Arakan Province in Myanmar.

Captured members of 'Jamaat-e-Arakan' confessed to interrogators in Bangladesh that the plan of establishing independent 'Nuresia' state is getting "fullest support" from the Muslim population in Arakan province in Myanmar, as well as some of the Muslim nations (Saudi Arabia and the OIC?) in the world.

In a top secret report, one of the sensitive intelligence agencies in Bangladesh informed the government about the increased and doubtful movements of foreign nationals within Chittagong, Rangamati, Bandarban and Cox's Bazar districts in Bangladesh.

It said, people from Pakistan, Turkey, Saudi Arabia, Kuwait and Sudan as well as some other countries are visiting Cox's Bazar in a doubtful frequency in recent days. They distributed relief materials during the months of Ramadan among the residents of Chittagong, Rangamati, Bandarban and Cox's Bazar districts in Bangladesh, while large volume of relief materials were smuggled to Arakan Province through cross-border trafficking network controlled by the Arakan Muslim militia groups and their Bangladeshi counterparts.

The intelligence report said, groups of people from Pakistan are visiting Hrila Madrassa within the Bangladesh-Myanmar border in Teknaf, most of who are arriving in Bangladesh with 'on arrival visa'.

It also said that the Jihadist terror outfits are distributing a newspaper named 'At-Tahrid' within their targeted area of so-called 'Nuresia' Sharia state, which has recently published an interview of Pakistan based top aide of Osama Bin Laden.

The Jihadists are giving motivation to the locals in waging war against "enemies of Islam" with the aim of establishing a separate 'Nuresia' state within South Asia. The Islamist militants are also recruiting locals from Chittagong, Rangamati, Bandarban and Cox's Bazar districts in Bangladesh as well as Arakan Province in Myanmar and sending them for 'training' in Pakistani frontier, Jammu-Kashmir and Palestine.

It is also learnt from intelligence report that, organizations such as Hamas, Muslim Brotherhood etc are providing secret fund to these Jihadist outfits, while Iranian regime is also extending patronization with weapons and fund. The entire activities of these Jihadists groups are reportedly controlled from Saudi Arabia, Pakistan, Libya, Singapore, Malaysia, Thailand and United Kingdom.

Chief of Hizbut Towhid militancy group in Malaysia [Kuala Lumpur] is collecting millions of dollars from various individuals and organizations in the world, in the name of 'contribution to establishment of sovereign Nuresia'.

While Bangladeshi authorities are taking tougher measures in "combating the Jihadists" on the basis of the tips from the intelligence agency, some other sources told Weekly Blitz that the entire case of intelligence report and subsequent government actions were initiated to justify Dhaka's refusal in allowing the oppressed Muslims in Arakan Province in taking safe shelter inside Bangladesh.

Dhaka's refusal in allowing the Muslims to take shelter had earned huge criticism in the West and the world, while US administration has particularly expressed serious dissatisfaction on such stand of Bangladesh.

Seeking anonymity another highly placed source inside Bangladeshi intelligence said, they never heard of such 'Nuresia' state in the past and the entire story "must have been recently manufactured" by the intelligence agency of the neighboring country to divert the issue of series of failures of the ruling Bangladesh Awami League as well as high profile corruptions, with the ulterior motive of salvaging the ruling party from a possible nosedive in near future.

OIC’s Formation of ARU to speed up Islamization of Arakan

The headquarters of the Organisationn of the Islamic Conference (OIC) in Jeddah, hosted a convention of the Senior Rohingya Leaders in order to bring peace, prosperity, and hope for the future to the Rohingya people.

· Based on resolution No. 4/37- MM, operative paragraph No.4, issued by the 37th CFM session, which urged the Rohingya parties to cooperate and unite their ranks under a united coordination council and calls on them to continue their efforts to reclaim their rights.

“Commends the efforts of the Secretary General aimed at coordinating the work of the Rohingya Muslim organizations and uniting their ranks under a united coordination council and calls on him to continue these efforts to reclaim their rights;”

· With reference to the MoU signed by the Senior Rohingya Leaders on June 8th-9th, 2010 under the patronage of H.E the Secretary General of OIC Prof. Ekmeleddin Ihsanoglu, an expanded Convention was jointly convened by OIC and EBO with the participation of Eminent Rohingya Leaders on 30th -31st May, 2011. The ARU appeals to the OIC Secretary General to recognize the ARU as an independent organization representing the Rohingya people.

· Mr. Talal Daous, the Director of the Muslim Minorities and Communities Department represented the OIC Secretary General Prof. Ekmeleddin Ihsanoglu and Mr. Harn Yawnghwe represented the Euro-Burma Office in this Convention which was held at the Headquarters of the OIC General Secretariat. Participants agreed on the following:

1. The Convention agreed to establish a Charter which will be drafted by the Director General, the four founding members, Mr. Zaw Min Htut, and Mr. Maung Tun Khin. The Congress will ratify the Charter at its first meeting.
2. The Convention agreed that the Arakan Rohingya Union (ARU) shall register itself as a non-profit organization in the USA.
3. The participants expressed their gratitude and appreciation for the efforts of the Secretary General of the OIC H.E. Prof. Ekmeleddin Ihsanoglu, the department of the Muslim Minorities and Communities, and Mr. Harn Yawnghwe for convening this historic convention of the Senior Rohingya Leaders in order to bring peace, prosperity, and hope for the future to the Rohingya people. 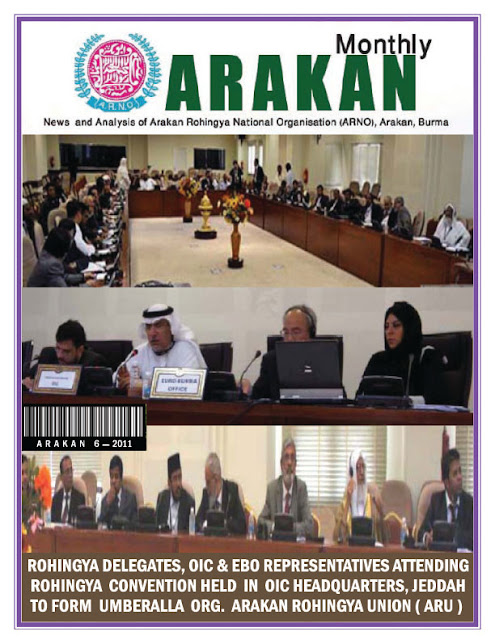 Related posts at following links:
Harn Yawnghwe and NCGUB: Ali Baba and Forty Thieves
Islamic Genocide of Native Buddhist at Maungdaw
1942 Genocide of Yakhin-Buddhist in Maungdaw District
Fake Photos, Lies, and Muslim Killings in Burma!
Rohingyas, Harn Yawnghwe, and Fraudulent Claims
Population Explosion in Bangladesh
Bengali Shwe-youk-du-lar and His Enormous Family of 82
Jihad on Buddhists Destined for Destruction by Islam
Posted by Hla Oo at 11:18 AM