(Part of this post is direct from India’s “Observer Research Foundation”.) Our old Bertil was at us Burmese and our country Burma - his favourite country to trash the whole of his long career away from his homeland Sweden - again by seriously predicting the Soviet-style sudden collapse of our beloved Union of Burma.

“Myanmar’s reforms are mostly ‘cosmetic’ as the army still retains significant control over the country’s politics. However, the cosmetic changes can have unintended consequences, as witnessed in the case of Mikhail Gorbachev’s Glasnost & Perestroika in the erstwhile Soviet Union,” said Bertil Lintner, author of many books on Myanmar.

Giving a talk on "Recent Changes in Myanmar & Neo Geopolitical Trends in the Asia-Pacific Region" at Observer Research Foundation on Tuesday (February 19, 2013), Lintner said people in Myanmar are enjoying new freedoms and recent years have seen the emergence of a civil society, all of which bodes well for the future of the country.

“The recent changes in Myanmar have been made by the establishment to improve its relations with the United States and have emerged as a response to Chinese dominance over the last two decades. Myanmar’s image in the West has perennially been that of a tyrannical regime. This culminated with the imposition of sanctions and a long period of isolation. It is precisely this image which the government in Myanmar is on course to rectify. But with no real power ceded by the military government, it is questionable as to what extent its promised reforms have managed to actually change the country’s turbulent political climate,” Bertil Lintner said. 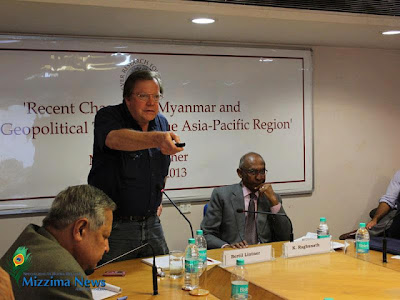 Blah blah blah, and suddenly our old Bertil pulled out his so-called secret weapon, the top-secret (bottom-opened) dossier which he gallantly called Burma’s Master Plan. In fact, his so-called secret dossier was a graduating thesis of low-level army Lt. Colonel named Aung Kyaw Hla then attending a course at the NDC (National Defence College) in 2004.

Probably some idiot colonel - who tried to impress a foreign journalist or just a clever Intelligence trick to play on our old and senile Bertil - might have dusted the old thesis from the shelf at NDC and Xeroxed the whole contents and sent it to him through remarkably-slow Burmese snail-mail.

“On the question of the establishment’s capacity to deal with ethnic minorities, Lintner alluded to a comment made by Aung San during Myanmar’s independence struggle from Britain, insisting that any attempts at forming a unitary state would serve only to marginalise minority groups. Lintner argued that in order to accommodate the various ethnic minorities, they require a degree of political autonomy under a loose federation,” Lintner concluded based on his so-called secret dossier or master plan of Burma army.

A loose federation or a Soviet-style collapse is what old Dr. Bertil prescribes for our supposedly-very-sick Burma. Is he crazy or just plain old stupid? I think he'd forgotten all about battle-hardened Burma army and their powerful 105 mm Howitzer guns that smashed the hell out of his favourite insurgents the recalcitrant KIA just last month.

Burma Army is not that Stupid as Bertil thinks of them

I have a story to tell about that topic. In early 1988 I returned to Rangoon after studying and then working in Bangkok for almost 4 years from late 1984. One of BSPP (Burma Socialist Programme Party) party’s high-ranking secretaries at that time was an ex-Army Colonel who was a young cadet officer in my father’s guerrilla battalion during the Japanese Revolution in the last year of Second World War.

And he knew me   since I was a young cadet in Hla Thaung Regiment and he was serving at Burmese army Middle Command HQ at Mingladon in late 60s.

Once he knew I was back at home he promptly invited me to his house on the AD Road one night for a dinner and a long chat. He wanted to know everything I knew about Thailand from my long stay there. Especially about the Thai-Burma border. It was a very, very long chat.

Then after that long chat he stayed still and silence for a while as if he was in a deep thought. And then suddenly he asked me if I knew how to get rid of KNU Karens on the border from a patriotic-Burmese point of view. Luckily I’d been giving a lot of thoughts on that subject as an ex-army soldier.

I simply told him that KNU was so extremely rich with taxes collected from the smuggling goods coming from Thailand passing through their various gates on the border. Money is the only essential stuff for fighting any war.

I still remember what our old sergeant kept on yelling angrily at us young soldiers back in the 70s whenever we wasted so many hundreds of expensive 7.62 mm German-made G3 bullets and killed not a single enemy at minor skirmishes. It costs our army 5 kyats for anyone of you little mother-fuckers to fire one G3 bullet, he kept on saying. Back then I earned just over 200 kyats a month as a young lance-Corporal.

And following was what KNU/KNLA field officer Robert Ba Zan (Foo-kee-do) later wrote of KNU’s massive cash flow from their smuggling gates on the border:

“Back then everything the country needed was coming mainly from Thailand and our KNU was thriving taxing the goods flowing in and out of Burma through the Thai-Burma border controlled by our forces.

We even felt that the pedestrian traffic was so heavy on the well-trodden routes over the Dawna mountain range by the border the popular trails even sunk down a few inches.

Because of thriving black economy our Kawthoolei Government’s Custom Department had massive income from the taxes and duties. And those funds made the KNLA Sixth Brigade, seventh Brigade, and SB-101 really strong.

Most of the trading gates were in the area controlled by the KNLA Seventh Brigade. Money collected at the Mae-tha-waw, Mae-ta-yee, Maw-phoe-kay, and Mae-la gates were so massive no one except the collectors hadn’t an idea how much was being collected everyday. But one could easily guess the funds from those border-trading-gates were the blood lines of our Karen revolution.

Back then the giant teak-case (10ft by 5ft and 5ft high) of Major Lar Moo, the supply officer of Seventh Brigade, was filled up to the rim daily with one hundred kyat notes and it took the team of six female soldiers led by Lt. Nant Yin Aye from the KNU accounts department many hours to count.

Burmese currency was also very valuable as back then one Kyat fetched two Thai Bahts in the black markets. KNU could buy massive amount of weapons and ammunitions for our KNLA in the weapons black markets with that tax money from the black economy of Burma.”
So if our army found a way to shut down that huge tax money to KNU they would definitely fall. But the whole of our Burma then was totally relying on that smuggling goods from thriving black markets of Socialist Burma. So we do need to open our economy first to reduce the total reliance on the black markets.

He liked my answer and replied that they already knew and he just would like to confirm by someone like me. We open the economy, start our own trading routes through the border, and shut the KNU gates down and the KNU would have no way to fight back without money. And the icing on the cake, according to him, was that greedy Thais now supporting KNU would abandon them once they saw money in the direct trade with Burma.

I left Burma again in 1988 to immigrate to Australia and from far away Sydney I could see the Burma army was doing exactly what he said they would do and the rest is the history.

So my conclusion is our Generals know very well what they’re doing and one of their main purposes for living a life as a Burmese patriot and a Burmese army officer is to prevent the disintegration of our beloved Union of Burma at any cost. Millions have sacrificed their dear lives for the Union last 60 years.