(Humberto Fontova’s article from The BRIEBART NEWS on 09 October 2017.) 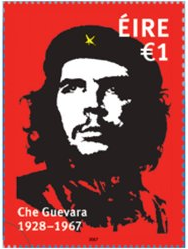 Forty three years ago this week, Ernesto “Che” Guevara got a major dose of his own medicine. Without trial he was declared a murderer, stood against a wall and shot. Historically speaking, justice has rarely been better served. If the saying “What goes around comes around” ever fit, it’s here.

“When you saw the beaming look on Che’s face as the victims were tied to the stake and blasted apart by the firing squad,” said a former Cuban political prisoner Roberto Martin-Perez, to your humble servant here, “you saw there was something seriously, seriously wrong with Che Guevara.”

As commander of the La Cabana execution yard, Che often shattered the skull of the condemned man (or boy) by firing the coup de grace himself with his favourite pistol. When other duties tore him away from his beloved execution yard, he consoled himself by viewing the slaughter. Che’s second-story office in Havana’s La Cabana prison had a section of wall torn out so he could watch his darling firing-squads at work.


Even as a youth, Ernesto Guevara’s writings revealed a serious mental illness. “My nostrils dilate while savoring the acrid odor of gunpowder and blood. Crazy with fury I will stain my rifle red while slaughtering any vencido that falls in my hands!” This passage is from Ernesto Guevara’s famous Motorcycle Diaries, though Robert Redford somehow overlooked it while directing his heart-warming movie.

The Spanish word vencido, by the way, translates into “defeated” or “surrendered.”And indeed, “the “acrid odor of gunpowder and blood” very, very rarely reached Guevara’s nostrils from anything properly describable as combat. It mostly came from the close-range murders of defenseless men (and boys.)

Carlos Machado was 15 years old in 1963 when the bullets from the firing squad shattered his body. His twin brother and father collapsed beside Carlos from the same volley. All had resisted Castro and Che’s theft of their humble family farm, all refused blindfolds and all died sneering at their Communist murderers, as did thousands of their valiant countrymen..“Viva Cuba Libre! Viva Cristo Rey! Abajo Comunismo!” “The defiant yells would make the walls of La Cabana prison tremble,” wrote eyewitness to the slaughter, Armando Valladares.

The one genuine accomplishment in Che Guevara’s life was the mass-murder of defenseless men and boys. Under his own gun dozens died. Under his orders thousands crumpled. At everything else Che Guevara failed abysmally, even comically.

During his Bolivian “guerrilla” campaign, Che split his forces whereupon they got hopelessly lost and bumbled around, half-starved, half-clothed and half-shod, without any contact with each other for 6 months before being wiped out.

They didn’t even have WWII vintage walkie-talkies to communicate and seemed incapable of applying a compass reading to a map. They spent much of the time walking in circles and were usually within a mile of each other. During this blundering they often engaged in ferocious firefights against each other.

“You hate to laugh at anything associated with Che, who murdered so many defenseless men and boys,” says Felix Rodriguez, the Cuban-American CIA officer who played a key role in tracking him down in Bolivia. “But when it comes to Che as “guerrilla” you simply can’t help but guffaw.”

Che’s genocidal fantasies included a continental reign of Stalinism. And to achieve this ideal he craved, “millions of atomic victims” — most of them Americans. “The U.S. is the great enemy of mankind!” raved Ernesto Che Guevara in 1961.

“Against those hyenas there is no option but extermination. We will bring the war to the imperialist enemies’ very home, to his places of work and recreation. The imperialist enemy must feel like a hunted animal wherever he moves. Thus we’ll destroy him! We must keep our hatred against them [the U.S.] alive and fan it to paroxysms!”

This was Che’s prescription for America almost half a century before Osama bin Laden, and Al-Zarqawi and Faisal Shahzad appeared on our radar screens. Compared to Che Guevara, Ahmadinejad sounds like the Dalai Lama. 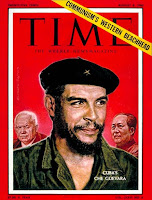 So for many, the question remains: how did such an incurable doofus, sadist and epic idiot attain such iconic status? (Hint: The Fake News Media - so-called MSM - in US like the Time Magazine.)

The answer is that this psychotic and thoroughly unimposing vagrant named Ernesto Guevara de la Serna y Lynch had the magnificent fortune of linking up with modern history’s top press agent, Fidel Castro, who — from the New York Times’ Herbert Matthews in 1957, through CBS’ Ed Murrow in 1959 to CBS’ Dan Rather, to ABC’s Barbara Walters, to most recently, the Atlantic’s Jeffrey Goldberg — always had American reporters anxiously scurrying to his every beck and call and eating out of his hand like trained pigeons.

Had Ernesto Guevara not linked up with Raul and Fidel Castro in Mexico city that fateful summer of 1955 — had he not linked up with a Cuban exile named Nico Lopez in Guatemala the year before who later introduced him to Raul and Fidel Castro in Mexico City — everything points to Ernesto continuing his life of a traveling hobo, panhandling, mooching off women, staying in flophouses and scribbling unreadable poetry.

Che’s image is particularly ubiquitous on college campuses. But in the wrong places. He belongs in the marketing, PR and advertising departments. His lessons and history are fascinating and valuable, but only in light of P.T. Barnum. One born every minute, Mr. Barnum? If only you’d lived to see the Che phenomenon. Actually, ten are born every second.

His pathetic whimpering while dropping his fully-loaded weapons as two Bolivian soldiers approached him on Oct. 8 1967 (“Don’t shoot!” I’m Che!” I’m worth more to you alive than dead!”) proves that this cowardly, murdering swine was unfit to carry his victims’ slop buckets. 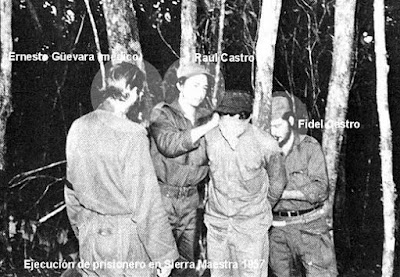 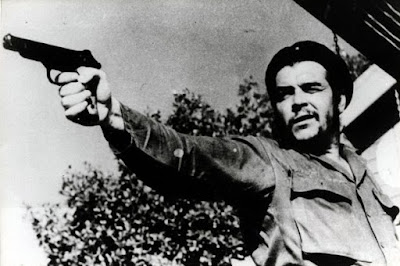 The Irish government authorised the production of a stamp honouring the ‘Irish roots’ of Argentinian Marxist and mass murder Ernesto “Che” Guevara. Ireland’s mail service An Post produced the stamp to mark the 50th anniversary of the death of Guevara, which falls on Monday, October 9th, reports The Irish Times.

Revealed Friday, the stamp’s cover envelope features a quote from Guevara’s father, Ernesto Guevara Lynch, who was of Irish descent, which reads: “In my son’s veins flowed the blood of the Irish rebels.” Highlighting Argentinian-born Guevara’s “Irish rebel” roots, the postmark, described as a “beautiful stamp” by An Post, depicts the well-known painting by Dublin artist Jim Fitzpatrick.

Cuban-American radio host Ninoska Perez Castellón of Miami 710 radio told RTÉ’s Morning Ireland that she had received calls from Cuban-American listeners appalled by the “offensive” use of the brutal killer’s image on Ireland’s stamps.

Describing the stamp as “objectionable”, Ms. Perez Castellón said: “It doesn’t matter that it’s an image created by an artist, it’s the image of a mass murderer… What does Ireland think it is doing by putting Che Guevara on a stamp?”

“To me, it’s really shameful that Ireland would put the image of someone who was a foreigner, went to Cuba to kill… was a failure in everything he did. So I don’t know what’s there to honour about Che Guevara,” she added.

The Marxist assisted Fidel Castro in overturning the Cuban government in a bloody political coup in January 1959 and then held key political offices during Castro’s regime, training and motivating the regime’s firing squads that killed thousands, until he was executed by the Bolivian army on October 9, 1967, whilst attempting to organise a coup.

According to amassed witness testimonies, the Marxist, known as the Butcher of La Cabaña, the prison where the opponents of Castro’s government were taken after the revolution, was personally responsible for the deaths of dozens and was known to interrupt firing squad executions to perform the killing himself.

A Department of Communications spokesman told RTÉ that the decision to issue the stamp had been approved by the government in 2015, “as per normal procedures”. In 2012, the Irish city of Galway abandoned plans to erect a statue of Guevara, spearheaded by left-wing Irish Labour politician Billy Cameron, after widespread public outcry. 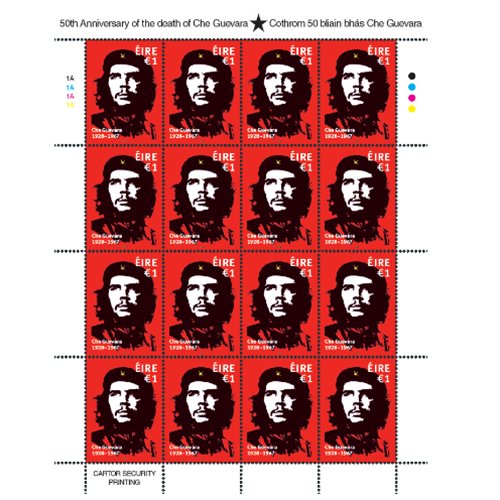 On this day in 1967, socialist revolutionary and guerilla leader Che Guevara, age 39, is killed by the Bolivian army. The U.S.-military-backed Bolivian forces captured Guevara on October 8 while battling his band of guerillas in Bolivia and assassinated him the following day.

His hands were cut off as proof of death and his body was buried in an unmarked grave. In 1997, Guevara’s remains were found and sent back to Cuba, where they were reburied in a ceremony attended by President Fidel Castro and thousands of Cubans.

Ernesto Rafael Guevara de la Serna was born to a well-off family in Argentina in 1928. While studying medicine at the University of Buenos Aires, he took time off to travel around South America on a motorcycle; during this time, he witnessed the poverty and oppression of the lower classes. He received a medical degree in 1953 and continued his travels around Latin America, becoming involved with left-wing organizations.

In the mid 1950s, Guevara met up with Fidel Castro and his group of exiled revolutionaries in Mexico. Guevara played a key role in Castro’s seizure of power from Cuban dictator Fulgencio Batista in 1959 and later served as Castro’s right-hand man and minister of industry.

Guevara resigned—some say he was dismissed—from his Cuban government post in April 1965, possibly over differences with Castro about the nation’s economic and foreign policies. Guevara then disappeared from Cuba, traveled to Africa and eventually resurfaced in Bolivia, where he was killed.

Following his death, Guevara achieved hero status among people around the world as a symbol of anti-imperialism and revolution. A 1960 photo taken by Alberto Korda of Guevara in a beret became iconic and has since appeared on countless posters and T-shirts.


However, not everyone considers Guevara a hero: He is accused, among other things, of ordering the deaths of hundreds of people in Cuban prisons during the revolution. 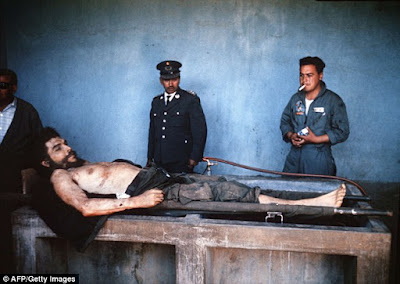 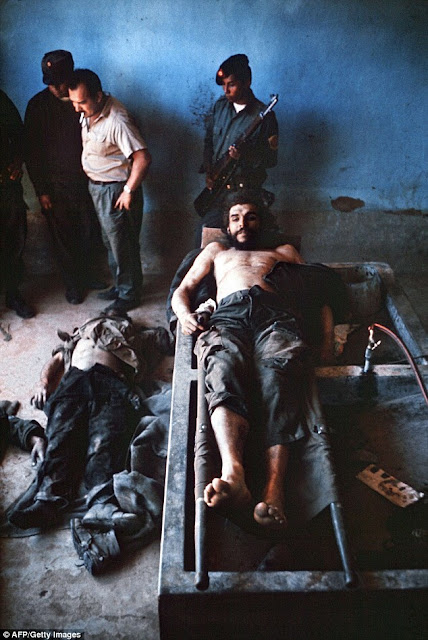