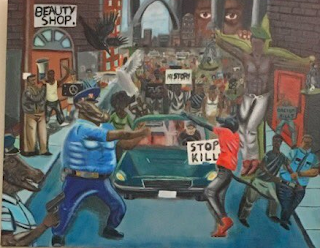 Washington (CNN): The tug-of-war over a controversial painting displayed in the Cannon tunnel of the US Capitol continued Tuesday as Democratic Rep. William Lacy Clay and members of the Congressional Black Caucus re-hung the artwork that Republican Rep. Duncan Hunter personally removed Friday.

Lawmakers have been facing off over the artwork that some Republicans have criticized as anti-police. In Tuesday morning's House Republican Conference, Hunter received a round of applause from his GOP colleagues, his chief of staff, Joe Kasper, told CNN.

Fellow Rep. David Reichert said he will write a letter to the architect of the Capitol calling for the painting's removal -- again. If the architect does not remove the painting, Kasper said, House Speaker Paul Ryan told members he will take steps toward removing the painting.


Each member of Congress can select a painting by a constituent to hang in the Cannon tunnel. Hunter and other House Republicans took issue with the one from Clay's district that had some police depicted as pigs.

The painting, by high school student David Pulphus, won Clay's congressional art competition last May. Members do not select the artists, do not sign off on the artistic concepts and have no role in judging the competition, Clay said.

Speaking to reporters after re-hanging the artwork, Clay called the saga of the painting a "manufactured controversy." He said it was "pathetic" that Republican members who "constantly refer to themselves as Constitutional conservatives" would not apply "fundamental free speech rights" to the artist.

Hunter dismissed allegations that he is restricting First Amendment rights, saying the painting violated House rules. "It's not about the First Amendment, it's about the rules of the Capitol," Hunter said. "The art competition rules do not allow for this type of painting," which he described as "offensive."

The law enforcement community and several members of Congress first took issue with the artwork after its existence was reported by Independent Journal Review. Clay blamed Independent Journal Review, which he described as an "alt-right blog," for stirring up the controversy. IJR is a conservative publication and a member of the News Media Alliance that co-hosted a presidential debate with ABC News during the primaries.

While Clay said he did not agree or disagree with the art and that he supported police, he later noted that the artwork is an indication of his 18-year-old constituent's worldview on police, citing the deaths of Trayvon Martin, Eric Garner and Michael Brown, among others.

Clay said Monday he planned to file a police report against Hunter for removing the painting, but on Tuesday, he said he has no intention to litigate further. He called Hunter a "good guy," and a "friend," but said he was disappointed by his actions.

Rep. Lacy Clay (D-Mo.) returned a controversial painting depicting a confrontation between black protesters and police officers portrayed as feral pigs to its original place in the Capitol complex on Tuesday after a Republican lawmaker personally removed it.

The painting had been displayed in a highly trafficked tunnel connecting the Capitol and two House office buildings since June as part of an annual high school art competition. But Rep. Duncan Hunter (R-Calif.) took down the painting and returned it to Clay’s office on Friday after conservative news outlets had taken notice in recent weeks.

Clay, surrounded by fellow members of the Congressional Black Caucus, said taking down the painting violated the freedom of speech and expression. “This is really not about a student art competition anymore. This is about protecting the Constitution,” Clay said.

Within three hours of Clay re-hanging the painting, it was taken down again — this time by Rep. Doug Lamborn (R-Colo.). The painting was only down for less than 15 minutes before Clay restored it for a second time, an aide to Clay said.

Law enforcement organizations offended by the depiction of police officers as pigs had asked Speaker Paul Ryan (R-Wis.) last week to remove the painting. Capitol Police officers had also taken offense at the picture, which is currently located near a police security checkpoint. Clay is trying to file a complaint with the Capitol Police accusing Hunter of theft.

Joe Kasper, a spokesman for Hunter, said it's "laughable" to consider it theft when the painting was returned to Clay's office. Capitol Police are declining to take up Clay's charge, he added. If anything, Kasper said, law enforcement have been thanking Hunter for taking down the painting.

"Hunter made his point and the outpouring of support among law enforcement and families has been truly amazing. If anything, all Clay is doing is helping to solidify Hunter's standing with such an important constituency and we'll certainly take it," Kasper said.

Clay countered that the St. Louis police chief, Sam Dotson, had praised the efforts to protect his constituent's painting. The painting has inflamed tensions on Capitol Hill between the two parties.

The Hill asked Congressional Black Caucus Chairman Cedric Richmond (D-La.) if the painting would need someone to monitor it around the clock to prevent further removals. "No," Richmond replied. "We might just have to kick somebody's ass and stop them, though."

House Republicans discussed the painting during a morning conference meeting on Tuesday and concluded it violates the art competition’s rules, according to members in attendance. They concluded the painting violates the art competition's guidelines that no submissions depict "sensationalistic" subjects of "contemporary political controversy." Speaker Paul Ryan (R-Wis.) told members he was going to look into removing the painting, spokeswoman AshLee Strong said.

Rep. David Reichert (R-Wash.), a former sheriff, plans to ask the Architect of the Capitol to remove the painting. The painting, by student David Pulphus, features a confrontation between a protester, portrayed as a black panther, and two police officers who look like feral pigs. A black police officer depicted as a human is shown escorting a protester off to the side.

When told that Ryan is reviewing a process to take down the painting, Clay indicated he is open to deliberating such a step. The problem, he said, was Hunter's decision to remove it unilaterally. Clay said there are statues of Confederate leaders like Jefferson Davis and Robert E. Lee in the Capitol complex that he finds "deeply offensive," but he hasn't tried to remove them himself.


"I don’t mind the Speaker’s office following a process. If there’s a process to remove this painting, well, let’s start the process. And let’s discuss it," Clay said. "But you just don’t walk up here and remove a painting because you are offended by it."

Clay represents the town of Ferguson, Mo., where a white police officer shot an unarmed black teenager in 2014, sparking nationwide protests against police brutality. He said the controversy of the painting belies a larger problem lawmakers should be discussing instead.

"Historically, the African American community has had a painful, tortured history with law enforcement in this country," Clay said. "The larger, much more fundamental question is, why does this young artist feel this way? And what can we do as leaders of a compassionate and just nation to remedy that?"

Hunter, an Iraq War veteran and one of the first Republicans to endorse President-elect Donald Trump, has also drawn headlines in recent days on ethics issues. He was among the lawmakers who wanted to curtail the independent Office of Congressional Ethics (OCE) last week, an effort that House Republicans eventually abandoned following a public outcry.

Hunter was the subject of an OCE investigation that found, among other things, he had used $600 in campaign funds for his pet rabbit’s airfare. The California Republican has reimbursed his campaign about $62,000 in total for personal expenses highlighted by OCE, according to the Federal Election Commission and the San Diego Union-Tribune. Hunter has blamed similarly colored credit cards for mistakenly billing his campaign the personal expenses. 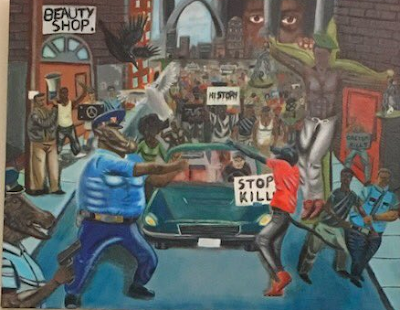