Italians Do Not Want To Stop Muslim-Smuggling Boats

(Tyler Durden’s article direct from The ZEROHEDGE on 03 January 2017.) 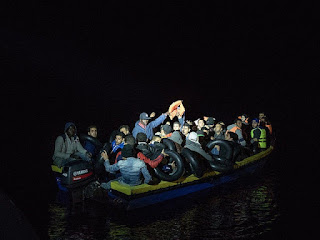 Why The Italian Government Can't Stop Refugee-Smuggling Boats? Because It Doesn't Want To:

The rule of law is often invoked by as a Western value that “populist” movements want to destroy, yet the establishment’s own governments have long suspended that very same rule of law when it comes to immigration. The most evident example of this is the immigration policy started by the Italian Letta government in 2013 and continued since then under the Renzi government.

In October 2013, the Letta government, facing waves of refugees escaping the chaos of Western backed-Arab Spring in Libya, which later transpired as nothing more than insurgencies of Islamic radical groups, launched the operation “Mare Nostrum” or “Our Sea”, which consisted in the use of the Italian navy near Libyan waters to rescue asylum seekers from the African coast.


As noble as its motivation may be, a side effect of the operation was to encourage even more people to undertake sea travel because now they are certain that the Italian navy will rescue them. The result was a 224% increase in the number of boats leaving Libya, which translates into an average of almost 10 million euro a month for the Italian government.

In November 2014 Mare Nostrum was replaced with the EU-coordinated and funded Triton, covering a smaller part of the Mediterranean at the cost of 3 million euro a month. The official reason for the Triton operation is to control borders, however once we look at facts the goal of the operation is simply to bring in as many people as possible, regardless of whether they are refugees, economic migrants, legals or illegals. Since then, smuggling channels instead of being stopped have multiplied.

An established practice since the “Mare Nostrum” operation, continued under Triton, was for smugglers to launch a rescue signal to the patrolling navy and request assistance. In the meanwhile, NGOs pursuing the “open borders” have joined forces with them, assisting anyone, legal, illegal, refugee, who wants to reach Europe.

The European Commission that is responsible for Frontex, and what follows border controls, has a clear opinion on the matter. Commissioner for Home Affairs, Migration and Citizenship Dimitris Avramopoulos said:

“Another important element that emerged strongly from the discussions on countering smuggling is that NGOs – and local and regional authorities – which provide assistance to smuggled migrants shall not be criminalised. I fully agree with this, of course, as I also agree on the need to protect the fundamental rights of those who are being smuggled. Those who we need to punish are the smugglers!” 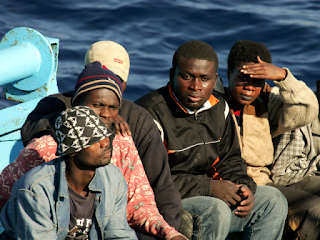 Punishing the smugglers, unless they are part of NGOs, meaning the problem can’t and won’t be solved, because NGOs will always be free to smuggle migrants. This continues a well established tradition; during the Monti government in 2011-12 a Ministry for Immigration was created and given to Andrea Riccardi of the “Comunità of Sant’Egidio”, the prominent Italian open borders NGO.

“Comunità of Sant’Egidio” runs projects such as “Humanitarian corridors”. The project funds an alternative route to bring people into Italy. Andrea Riccardi told the French media that he is convinced that Europe must open its borders. The Ministry was then given to Cecile Kyenge, a black woman born in the Democratic Republic of the Congo, who set herself a task of drastically reducing the requirements for acquiring Italian citizenship.

She proposes a law that would give citizenship to the children of immigrants if they are born on Italian soil. Under Renzi, the ministry was reduced to a department within the ministry for Home Affairs, and handed to Mario Morcone, again affiliated with the “Comunità di Sant’Egidio”.

But what happens once migrants of all kinds reach Italian soil? They are sent to refugee centers, where they can apply for the status of refugees. It should be noted that Italy has long run out of places for asylum seekers, and so the government is paying hotels, hostels or citizens in general to take in people.

Here a common practice for those who know that their application will be rejected is to destroy their documents beforehand so that the time to identify them increases exponentially. Experience has shown that centers eventually become overcrowded, which turns out to be an occasion for migrants to riot, destroy properties and finally escape and become illegals.

If they do not escape and their application is rejected, they are expelled. Expulsion however is voluntary and data shows that approximately only 50% of expelled migrants actually leave, probably to an other EU-Schengen country, the rest become illegals as well.

Moreover, as the “Mafia Capitale” scandal has shown, a collusion between members of the ruling Democratic Party controlling immigration-related institutions within the Italian state, including refugee centres, NGOs and the organized crime ensures that migrants are employed at the expense of Italian taxpayers and for insignificant hourly rates ensuring massive illegal profits for the racketeers. 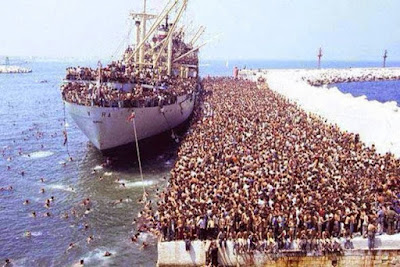 An infamous quote of a member of organized crime reveals how immigration is now a more profitable business than drug trafficking.

“Do you have any idea how much I make on these immigrants?” Salvatore Buzzi, a mafia affiliate says in a 1,200-page wiretap from early 2013. “Drug trafficking is not as profitable”. “We closed this year with a turnover of 40 million but… our profits all came from the gypsies (Roma people), on the housing emergency and on the immigrants,” Buzzi said.

That was in 2013, when 20.000 immigrants arrived in Italy. In 2016, 180.000 immigrants arrived in Italy. Corrupt politicians like Giuseppe Castiglione (NCD, partner of the ruling Democratic party), working for the Home Office, with the official mission of ”favouring the integration of those in need of international protection” in reality work to ensure profiteering from the crisis.

Illegal activities range from all levels; starting with the assignation of the construction of refugee centers to Democrat-related cooperatives in exchange for bribes; asylum seekers and illegals are then transferred to the Italian countryside and employed in the agricultural sector for an hourly rate between 1 and 3 euro.

When it comes to women, immigrants themselves organize prostitution rings within the refugee centers or sell them to work in the Italian streets. 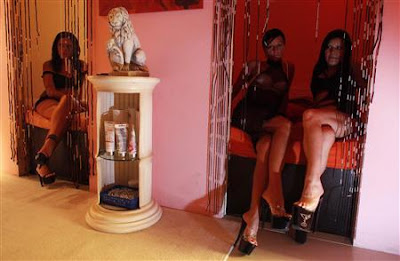 Organised crime is diversifying its activities as traditional drug smugglers are now expanding into the growing market of human trafficking, according to European Union police agency Europol.

Smuggling migrants across the Mediterranean is becoming big business as Italy saw its largest ever recorded number of migrants come into the country in 2016.  According to Michael Rauschenbach, Director of the department for combating organised crime at Europol, smugglers make more money trafficking migrants than smuggling drugs and controlling prostitution rings, Deutsche Welle reports.

“We have specific information that dangerous criminals draw more and more profit from human smuggling,” Mr. Rauschenbach said Wednesday. He said that people smuggling had become “a very lucrative business” as the money involved was higher and the risks lower for organised criminal gangs.

The Europol department director noted the prices for smuggling migrants from North Africa, usually from Libya, to the coast of Italy had also gone up in recent years. One year ago, the cost for a migrant from a West African country to reach mainland Europe was between €3,000 and €5,000. Now, according to Rauschenbach, that amount may only cover one stage of the entire trip. 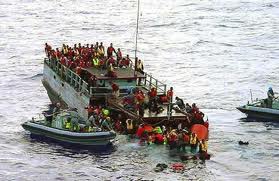 In 2016, Europol was able to determine and identify some 15,000 suspects who they believe are involved in the people trafficking trade. Some of the traffickers have been arrested in Italy, a number of them charged with some of the record numbers of drownings that have occurred over the past year on the Mediterranean.

Some of the captured traffickers, many who originate from Africa, have given authorities and the public a glimpse into the horrific world of people smuggling. One man, in particular, became infamous in Italy after authorities discovered images on his mobile phone which depicted organ harvesting from migrants who could not pay their smuggling fees and even in some cases, cannibalism.

The increased fees have put many of the migrants in a position of not being able to pay. For some who reach Libya it means returning back to West Africa, but for others, their fate can be much worse. Reports have shown that many children and women end up as sex slaves in Italy and as a result of the migrant crisis, thousands of prostitutes in the country have an African origin.

Drugs dealing is another way for migrants to pay back their debt and has become common not only in Italy but also in countries like Austria where police note a large number of street dealers in the capital of Vienna have a West African background.

BRUSSELS, Sept 15 (Reuters) – Some 23,000 irregular migrants arrived in Italy in August, the European Union’s border agency said on Thursday, most crossing the Mediterranean on what has become the main immigration route into Europe.

The vast majority of the 117,900 people who arrived in Italy this year came by boat from Libya. The Frontex agency said the numbers were similar to those in 2015. Rescuers pulled some 650 migrants to safety and recovered five dead bodies from boats in difficulty off the coast of Libya on Wednesday, Italy’s coastguard said.

Greece was the main point of entry for refugees and migrants in 2015, when some 1.3 million people reached the European Union, triggering bitter and unresolved disputes in the bloc over how to handle the influx.

Since Turkey agreed to prevent people from setting sail for Greece from its shores, the numbers taking that route have fallen dramatically. Frontex said some 3,430 people reached Greek islands from Turkey last month, only about three percent of the number in August, 2015.

“However, August also saw a first noticeable monthly increase since the EU-Turkey statement came into effect,” Frontex said. “In July, the number of detections stood at 2,030.” Those taking the Greek route tend to be from Syria, Pakistan, Afghanistan or Iraq, while the Italian route is dominated by Nigerians, Eritreans and Bangladeshis, Frontex said.


The EU is working with African countries to step up returns and has said it will make aid conditional on keeping a lid on migration to Europe. 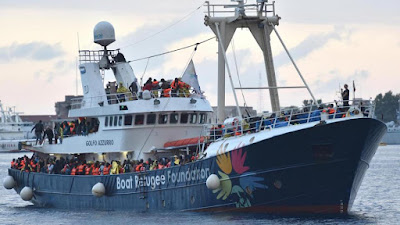 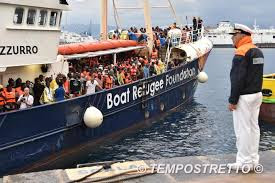