Wife-Beating And Wife-Raping Are Permitted In Islam

(Staff article direct from The RELIGION OF PEACE in 2016.) 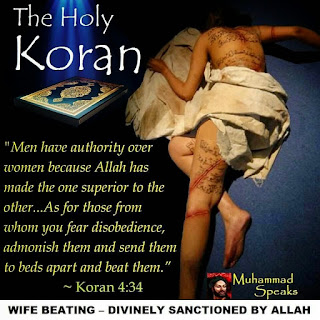 Wife-Beating: Does Islam allow a man to hit his wife or rape her if she refuses his desire?

Yes, but only if she doesn't do as he asks. The beating must stop if the woman complies with her husband's demands. Behind verbal abuse and abandonment, beating is intended as last resort solution to coerce submission.

According her testimony in the Hadith, Muhammad physically struck his favorite wife for leaving the house without his permission. It is not known how he treated his less-favored wives.

Quran (4:34) - "Men are the maintainers of women because Allah has made some of them to excel others and because they spend out of their property; the good women are therefore obedient, guarding the unseen as Allah has guarded; and (as to) those on whose part you fear desertion, admonish them, and leave them alone in the sleeping-places and beat them; then if they obey you, do not seek a way against them; surely Allah is High, Great."
Quran (38:44) - "And take in your hand a green branch and beat her with it, and do not break your oath..."  Allah telling Job to beat his wife (Tafsir).

Sahih Bukhari (72:715) - A woman came to Muhammad and begged her to stop her husband from beating her. Her skin was bruised so badly that it is described as being "greener" than the green veil she was wearing. Muhammad did not admonish her husband, but instead ordered her to return to him and submit to his sexual desires.

Sahih Bukhari (72:715) - "Aisha said, 'I have not seen any woman suffering as much as the believing women'" Muhammad's own wife complained of the abuse that the women of her religion suffered worse relative to other women.

Sahih Muslim (4:2127) - Muhammad struck his favorite wife, Aisha, in the chest one evening when she left the house without his permission. Aisha narrates, "He struck me on the chest which caused me pain."

Sahih Muslim (9:3506) - Muhammad's fathers-in-law (Abu Bakr and Umar) amused him by slapping his wives (Aisha and Hafsa) for annoying him. According to the Hadith, the prophet of Islam laughed upon hearing this.

At first, Muhammad forbade men from beating their wives, but he rescinded this once it was reported that women were becoming emboldened toward their husbands. Beatings in a Muslim marriage are sometimes necessary to keep women in their place. 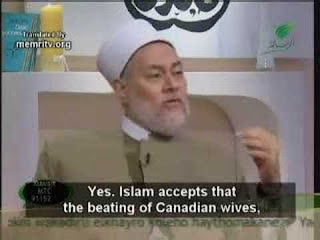 Abu Dawud (2126) - "A man from the Ansar called Basrah said: 'I married a virgin woman in her veil. When I entered upon her, I found her pregnant. (I mentioned this to the Prophet).' The Prophet (peace_be_upon_him) said: 'She will get the dower, for you made her vagina lawful for you. The child will be your slave. When she has begotten (a child), flog her'" A Muslim thinks he is getting a virgin, then finds out that she is pregnant. Muhammad tells him to treat the woman as a sex slave and then flog her after she delivers the child.

Ibn Ishaq/Hisham 969 - Requires that a married woman be "put in a separate room and beaten lightly" if she "act in a sexual manner toward others." According to the Hadith, this can be for an offense as petty as merely being alone with a man to whom she is not related.

Some contemporary Muslim apologists often squirm over this relatively straightforward verse from the Quran (4:34) - which gives men the right to beat their wives if they even have a "fear" of disloyalty or disobedience.

Others are not nearly as squeamish.  Sheikh Yousef al-Qaradhawi, one of the most respected Muslim clerics in the world, once made the famous (and somewhat ridiculous statement) that "It is forbidden to beat the woman, unless it is necessary."  He went on to say that "one may beat only to safeguard Islamic behavior," leaving no doubt that wife-beating is a matter of religious sanction.

Dr. Muzammil Saddiqi, the former president of ISNA (the Islamic Society of North America), a mainstream Muslim organization, says it is important that a wife "recognizes the authority of her husband in the house" and that he may use physical force if he is "sure it would improve the situation."

Sheikh Dr. Ahmad Muhammad Ahmad Al-Tayyeb, the head of Al-Azhar, Sunni Islam's most prestigious institution says that "light beatings" and "punching" are part of a program to "reform the wife". 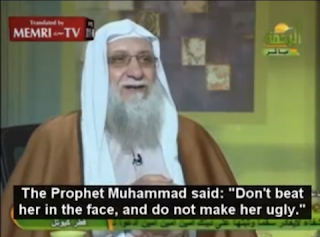 Dr. Jamal Badawi endorses corporal punishment as "another measure that may save the marriage". He isn't clear on how striking a woman will make her more inclined toward staying with her assailant, unless the implication is fear of more serious consequences if she leaves.

Egyptian cleric, Abd al-Rahman Mansour, said in a 2012 televised broadcast that, in addition to discouraging the wife from filing divorce, beatings would inspire the wife to "treat him with kindness and respect, and know that her husband has a higher status than her."

During Ramadan of 2010, another cleric named Sa'd Arafat actually said the woman is "honored" by the beating.  No one else seemed terribly surprised or upset by this.

An undercover report from progressive Sweden in 2012 found that 60% of mosques there actually advised beaten women not to report the abuse to the police.  These women were also told that they must submit to non-consensual 'sex' with their husbands.

In the birthplace of Islam (Saudi Arabia), about half of Saudi women are beaten at home.  "Hands and sticks were found to be used mostly in beating women, following by men’s head cover and to a lesser extent, sharp objects."

In 2016, the Council of Islamic Ideology proposed a bill - ironically (moronically) named the Protection of Women against Violence Act - that actually included exceptions for "lightly beating" defiant wives.

According to Islamic law, a husband may strike his wife for any one of the following four reasons:

- She does not attempt to make herself beautiful for him (ie. "let's herself go").
- She refuses to meet his sexual demands.
- She leaves the house without his permission or for a "legitimate reason".
- She neglects her religious duties.

Any of those above are also sufficient grounds for divorce.

Bashing A Disobedience Wife To Death Is Not A Crime 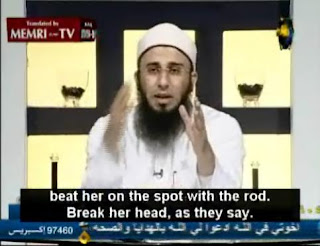 Respected Quran scholars in the past interpreted verse 4:34 with impressive candor.  Tabari said that it means to "admonish them, but if they refused to repent, then tie them up in their homes and beat them until they obey Allah’s commands toward you."

Qurtubi told wife-beaters to avoid breaking bones, if possible, but added that "it is not a crime if it leads to death."

Muslim apologists sometimes say that Muhammad ordered that women not be harmed, but they are actually basing this on what he said before or during a battle, such as in Bukhari (59:447), when Muhammad issued a command for all the men of Quraiza be killed and the women and children taken as slaves.  (Having your husband murdered and being forced into sexual slavery apparently doesn't qualify as "harm" under the Islamic model).

But, in fact, there are a number of cases in which Muhammad did have women killed in the most brutal fashion.  One was Asma bint Marwan, a mother or five, who wrote a poem criticizing the Medinans for accepting Muhammad after he had ordered the murder of an elderly man.  In this case, the prophet's assassins literally pulled a sleeping infant from her breast and stabbed her to death. After taking Mecca in 630, Muhammad also ordered the murder of a slave girl who had merely made up songs mocking him.

The Hadith are rife with accounts of women planted in the ground on Muhammad's command and pelted to death with stones for sexual immorality - yet the prophet of Islam actually encouraged his own men to rape women captured in battle (Abu Dawood 2150, Muslim 3433) and did not punish them for killing non-Muslim women (as Khalid ibn Walid did on several occasions - see Ibn Ishaq 838 and 856).


In summary, according to the Qur'an, Hadith and Islamic law, a woman may indeed have physical harm done to her if the circumstances warrant, with one such allowance being in the case of disobedience.  This certainly does not mean that all Muslim men beat their wives only that Islam permits them to do so.