Trump To Stop China From Taking Over South China Sea

(David Brunnstrom’s article direct from The REUTERS on 23 January 2017.)

The comments at a briefing from White House spokesman Sean Spicer signaled a sharp departure from years of cautious U.S. handling of China's assertive pursuit of territory claims in Asia, just days after Trump took office on Friday.

"The U.S. is going to make sure that we protect our interests there," Spicer said when asked if Trump agreed with comments by his Secretary of State nominee, Rex Tillerson, on Jan. 11 that China should not be allowed access to islands it has built in the contested South China Sea.

"It’s a question of if those islands are in fact in international waters and not part of China proper, then yeah, we’re going to make sure that we defend international territories from being taken over by one country," he said.


Tillerson's remarks at his Senate confirmation hearing prompted Chinese state media to say the United States would need to "wage war" to bar China's access to the islands where it has built military-length air strips and installed weapons systems.

Tillerson, who was expected to be confirmed as secretary of State on Monday, was asked at the hearing whether he supported a more aggressive posture toward China and said: "We’re going to have to send China a clear signal that, first, the island-building stops and, second, your access to those islands also is not going to be allowed.”

The former Exxon Mobil Corp (XOM.N) chairman and chief executive did not elaborate on what might be done to deny China access to the islands. But analysts said his comments, like those of Spicer, suggested the possibility of U.S. military action, or even a naval blockade, that would risk armed confrontation with China, an increasingly formidable nuclear-armed military power.

It is also the world's second-largest economy and the target of accusations by Trump that it is stealing American jobs. Spicer declined to elaborate when asked how the United States could enforce such a move against China, except to say: “I think, as we develop further, we’ll have more information on it.”

Military experts said that while the U.S. Navy has extensive capabilities in Asia to stage blockading operations with ships, submarines and planes, any such move against China's growing naval fleets would risk dangerous escalation. Aides have said that Trump plans a major naval build-up in East Asia to counter China's rise.

China's embassy in Washington did not immediately respond to a request for comment on the White House remarks. China's Foreign Ministry said earlier this month it could not guess what Tillerson meant by his remarks, which came after Trump questioned Washington's longstanding and highly sensitive "one-China" policy over Taiwan.

Washington-based South China Sea expert Mira Rapp-Hooper at the Center for a New American Security called the threats to bar China's access in the South China Sea "incredible" and said it had no basis in international law. "A blockade - which is what would be required to actually bar access - is an act of war," she added.

"The Trump administration has begun to draw red lines in Asia that they will almost certainly not be able to uphold, but they may nonetheless be very destabilizing to the relationship with China, invite crises, and convince the rest of the world that the United States is an unreliable partner."

Bonnie Glaser at the Center for Strategic and International Studies think tank called Spicer's remarks "worrisome" and said the new administration was "sending confusing and conflicting messages." Dean Cheng, a China expert at the conservative Heritage Foundation, said Spicer's remarks showed the South China Sea was an important issue for the Trump administration.

He said it was significant that neither Spicer nor Tillerson had been specific as to what actions would be taken and this left open the possibility that economic measures - instead of military steps - could be used against China and firms that carry out island building. 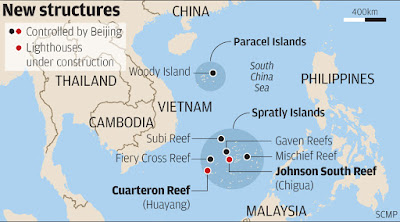 China is actively building artificial islands in the South China Sea, turning them into military and logistical bases. Beijing already has at least seven such bases, equipped with access channels, helipads, radar facilities, gun and missile emplacements, piers, military facilities and other objects of strategic importance.

China’s government had started its land reclamation and construction efforts on the reefs in early 2014. The main reason for such actions by China, is the US intention of controlling international trade in the Indian Ocean and the Pacific or even monopoly of trade control in those waters.

The US strategists are concerned about the rise of Chinese naval forces and Chinese expansion in the Pacific Ocean. Particularly, they aimed to prevent a situation where China will be able to defend particular zones of sea communications from foreign intervention. The U.S. strategic purpose is to seal off the PLA Navy in the South China Sea and in limiting its operational freedom of movement and allow for the encirclement of China by land.

Building up the reefs in the South China Sea, China pursues multiple objectives, including ensuring the safety of  expanding shipping lanes, extending maritime protection to its regional waters, and developing capabilities to conduct non-conventional security operations outside the region. The PLA Navy has sufficient self-defense capabilities, but deficiency in cross-region operations and force projection is evident, thought Beijing is trying to change that.

1. Cuarteron Reef is located in the London Reefs, on the Western side of the Spratly Islands. The area of the island built on the reef is 231,100 square meters. China began to build it up in the summer of 2014 and has since built an artificial island and is also building structures on the island. 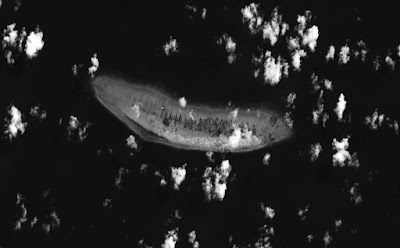 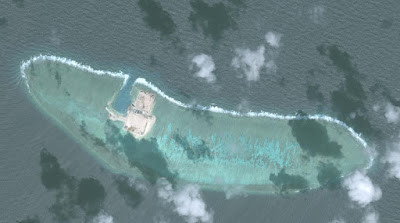 2. Fiery Cross Reef is situated on the west side of the Spratly Islands. The area of the island built on the reef is 2,740,000 square meters. Reclamation on Fiery Cross Reef began in August 2014. The landmass spans the entire existing reef and is approximately 3,000 meters long and 200-300 meters wide. China is currently building an airstrip with an estimated final length of 3,110 meters and has also begun development of port facilities. 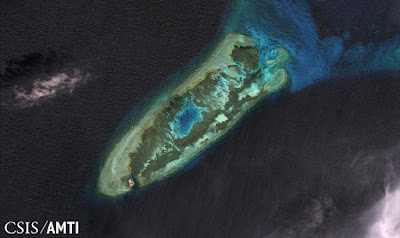 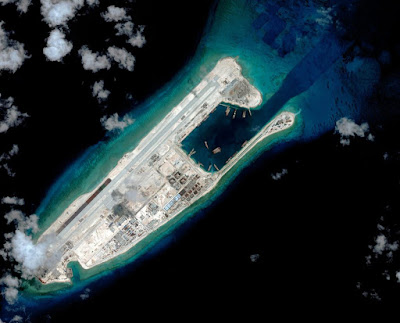 3. Gaven Reef is located in the Tizard Banks, near the center of the Spratly islands. The area of the island built on the reef is 136,000 square meters. Chinese construction at Gaven Reef in the Tizard Banks began sometime after March 30, 2014. The new, rectangular, artificial island is approximately 300 meters by 250 meters. Images show that a causeway now links the new island with a small facility that had long stood on the reef. 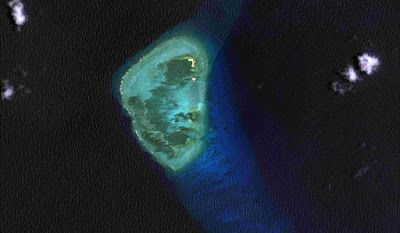 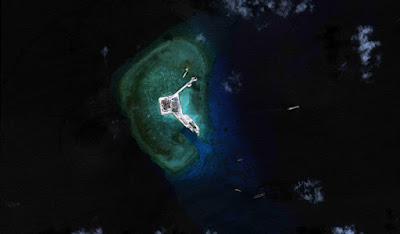 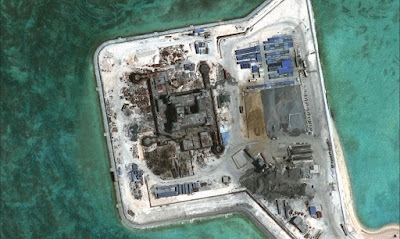 4. Hughes Reef is situated in the Union Banks, located in the northern Spratly Islands. The area of the island built on the reef is 76,000 square meters. Reclamation and building efforts on Hughes Reef appear to have begun in Summer 2014. There was significant development on the right side of the island between November 15 and December 12, 2014. 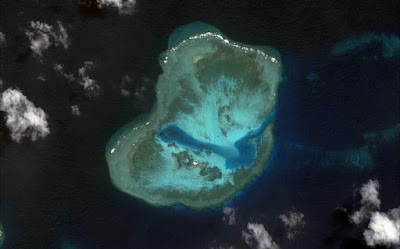 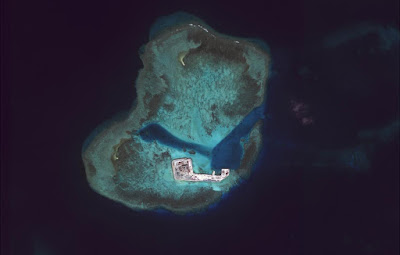 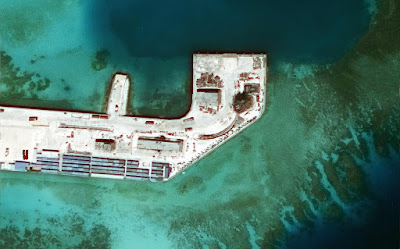 5. Johnson South Reef is located in the Northwest of the Spratly Islands at Union Banks. The area of the island built on the reef is 109,000 square meters. Significant progress was made toward the construction of new buildings on Johnson South Reef between November 15 and December 12, 2014. 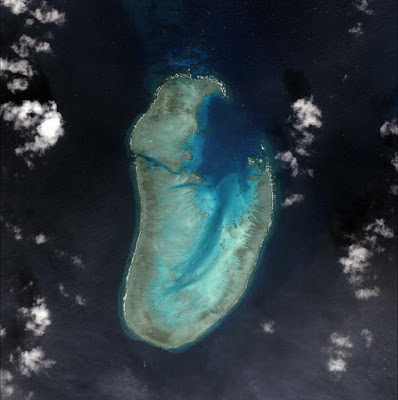 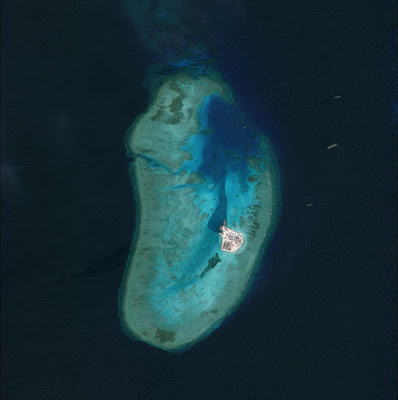 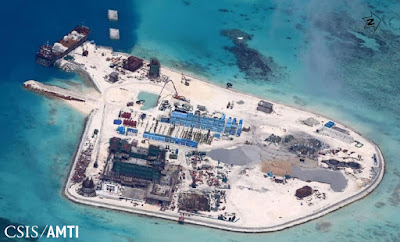 6. Mischief Reef is situated in the Spratly Islands. The area of the island built on the reef is 5,580,000 square meters. The works there started in early 2015. The reef falls within the exclusive economic zone of the Philippines, lying 129 nautical miles from Palawan. Many have speculated that the by widening the entrance to the reef, China intends to create a naval base on the reclaimed reef. 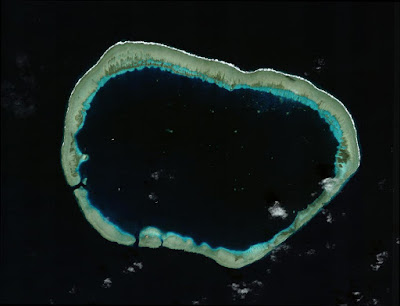 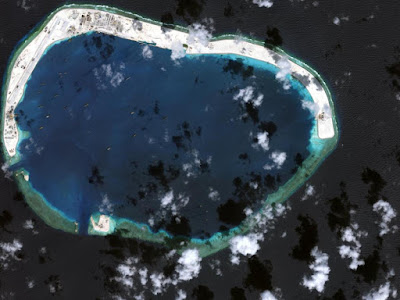 7. Subi Reef is located in the Northern Spratly islands. The area of the island built on the reef is 3,950,000 square meters. Subi Reef was occupied by China during its 1988 push to increase its footprint in the South China Sea. The reef is 14 kilometers from the Thitu Reef cluster occupied by the Philippines. China began construction on Subi and Cuateron Reefs in the early 1990s. China began land reclamation on Subi in July 2014. Reports have emerged that up to 200 troops are deployed there. 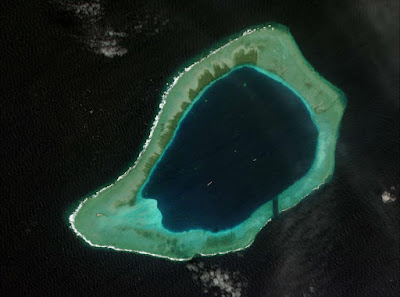 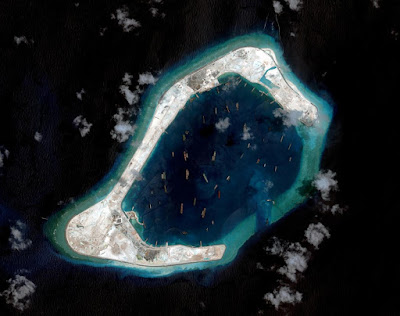 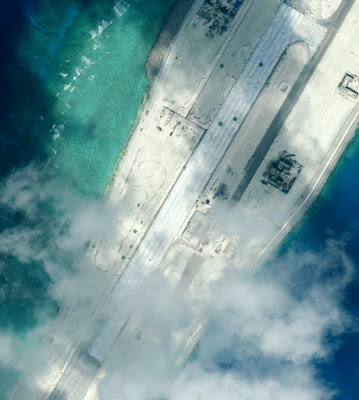