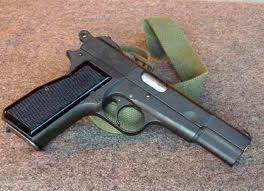 His sudden departure basically had knocked the normality out of deeply-troubled Kyaw San. I could see in his eyes right there. But he was okay that day but not on the day later. Next day he showed up again at our place. He had on him his standard army-issued Browning 9 mm High-power semi-automatic pistol again. While we were at the tea shop his anxious eyes were all over the place and his right hand was quite frequently on his gun making me really nervous.
The most depressing for me was his frequent mentioning of suicide if he was to be captured again by the commies, right in the middle of Rangoon’s crowded Indian Town. So I decided to send him home and after half an hour of persuasion he finally agreed to go home. I stopped a Mazda B360 Taxi on the Mogul Road and gave the driver his address to take him home. Then was the very last time I saw him as that night he killed himself or that was what I was told a week or two later by one of our classmates from Hla Thaung School.
He said Kyaw San didn’t die immediately from the self-inflicted gunshot wound and lasted a few days on his bed at the Mingaladon Base Hospital. I almost cried then but I just shut myself down and managed to forget the whole sad affairs in a month. I was so busy then as our graduation results came out and I got a tutor job in our Mechanical Engineering Department of RIT. I immediately moved out of my mother's house as I also took a job as a hall-tutor at the Poppa Hall the dormitory for the junior boy students from RIT.
I hadn’t seen Min Aung Hlaing also for a while after that and only in late 1984 just before I left Burma we ran into each other at right in front of the Rangoon City Hall. By then he was a major in a LID and he wasn’t so pleased that I was quitting my government job in Burma Irrigation and looking for greener pasture overseas. So I didn’t think we departed in good terms that day.
I thought both Kyaw San and Min Aung Hlaing were out of my life forever till I saw Kyaw San’s photo as the notorious Information Minister of Burma and Min Aung Hlaing’s as a junior army general in SPDC the ruling military junta in the Burmese newspapers a few years back.
The good news for me was that my dear friend Major Kyaw San was still alive if the Minister Kyaw San an ex-POW was the same Kyaw San.
Now in 2011 General Min Aung Hlaing is the new Commander-in-Chief of Burma armed forces and ex-Brigadier Kyaw San is again the powerful Information Minister in newly elected Government of the Union of Myanmar. And Kyaw San is widely said to be a hardliner among many moderates in the new Government led by the President Thein Sein.
So everybody was surprised and many reporters and journalists even made fun of him when he broke down into tears while giving a press conference on the recent breakout of hostilities between army and KIA in the Kachin State.

The donor stooge Irrawaddy even wrote of his inevitable dismissal from the Burmese Government.

I just wish those laughing reporters and journalists know how tough he is and the hell he had to go through to get to where he is now.

He is Lazarus with a triple bypass!