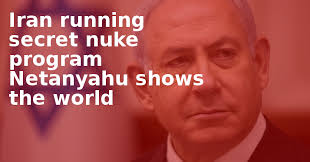 After signing the nuclear deal in 2015, Iran intensified its efforts to hide its secret nuclear files. In 2017, Iran moved its nuclear weapons files to a highly secret location in Tehran. This is the Shorabad District in southern Tehran. This is where they kept the atomic archives. Right here. Few Iranians knew where it was, very few, and also a few Israelis.

Now, from the outside, this was an innocent looking compound. It looks like a dilapidated warehouse. But from the inside, it contained Iran’s secret atomic archives locked in massive files. Actually, they’re a little bigger than this, okay?

A few weeks ago, in a great intelligence achievement, Israel obtained half a ton of the material inside these vaults. And here’s what we got. Fifty-five thousand pages. Another 55,000 files on 183 CDs. Everything you’re about to see, is an exact copy of the original Iranian material. You may want to know where are the originals? Well, I can say they’re now in a very safe place. 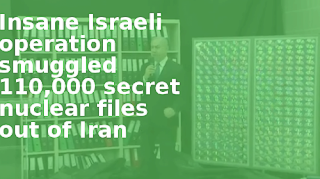 So, let me tell you the history of this material.

Here’s what Project Amad’s explicit goal was: creating nuclear weapons. This is an original Iranian presentation from these files, and here’s the mission statement: Design, produce and test five warheads, each with ten kiloton TNT yield for integration on a missile. You don’t need to read Farsi to read 10 kilotons here. TNT. This is the specific goal of Project Amad. That’s like five Hiroshima bombs to be put on ballistic missiles.

This is an original Iranian spreadsheet from the archives of Project Amad. Look at what we have here. Yellowcake production, centrifuge enrichment process, warhead project, simulation project, and test. And indeed, when we analyzed what’s in these archives, we found that Project Amad had the all the five elements, the five key elements, of a nuclear weapons program. I want to take them one by one. 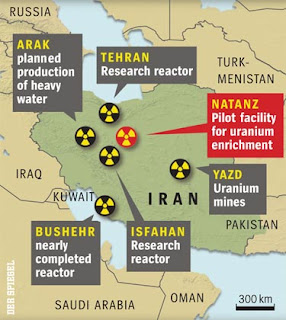 The first element is designing nuclear weapons. This is an original Iranian illustration of a weapon. Again, you don’t have to read Farsi to understand this. This is U235—that’s enriched uranium, right here at the core. That’s the only place where you find in the core enriched uranium. And here’s an Iranian simulation, original Iranian simulation putting all these components together. That’s the first component.

Second component – developing nuclear cores. Here’s a photo showing the casting process and a cast metal core, from the archives. And here’s a secret underground facility the Iranians were building to produce nuclear cores. We have hundreds of documents for each of these components.

We have many, many more such documents.

And fifth – integrating nuclear weapons on missiles. Here’s a design for a nuclear payload on a Shahab3 missile, from the archive. Here’s the warhead, here’s the bomb. And I don’t have to remind you, I think, that Iran is continually expanding the range of its ballistic missiles, its nuclear-capable missiles. They started with 1,000 kilometers, they’re now up to 2,000, roughly. They can reach Riyadh, Tel Aviv, Moscow, but they’re working on far, far greater ranges. They’re planning much longer range missiles to carry nuclear weapons.

So these files conclusively prove that Iran is brazenly lying when it says it never had a nuclear weapons program. The files prove that.

But here’s what happened next. Iran was faced with mounting pressure in 2003. You remember that, that was following the Gulf War, so it was forced to shelve Project Amad. But it didn’t shelve its nuclear ambitions. So Iran devised a plan to do two things. First, to preserve the nuclear know-how from Project Amad, and second, to further develop its nuclear weapons related capabilities. That plan came directly from Iran’s top leadership.

Remember that name, Fakhrizadeh. So here’s his directive, right here. And he says: “The general aim is to announce the closure of Project Amad,” but then he adds, “Special activities”—you know what that is—“Special activities will be carried out under the title of scientific know-how developments.” And in fact, this is exactly what Iran proceeded to do.

It continued this work in a series of organizations over the years, and today, in 2018, this work is carried out by SPND, that’s an organization inside Iran’s Defense Ministry. And you will not be surprised to hear that SPND is led by the same person that led Project Amad, Dr. Fakhrizadeh, and also, not coincidentally, many of SPND’s key personnel worked under Fakhrizadeh on Project Amad.

So this atomic archive clearly shows that Iran planned, at the highest levels, to continue work related to nuclear weapons under different guises and using the same personnel.

But the files show that Fordow was designed from the get-go for nuclear weapons as part of Project Amad. Here’s an original Iranian blueprint of Fordow. And what happened was that Iran continued to build Fordow years, secretly building, years after Project Amad ended. Here’s what it looks like. That’s the entrance. It goes under a mountain. You also will not be surprised that Iran insisted on keeping Fordow.

And amazingly, the (Obama’s) nuclear deal enabled it to do it. It enabled it to do it, but this came with a hitch. Iran was required by the nuclear deal, to come clean to the International Atomic Energy Agency about its nuclear program. This was an explicit condition for implementing the nuclear deal. Iran has to come clean. So in December 2015, the IAEA published its final assessment of what it called the military aspects of Iran’s nuclear program.

This is the report. This was Iran’s chance to fully come clean to the IAEA. They could tell the truth, they could say, we had this program, this secret program, it’s over, we shelved it, it doesn’t exist, we destroyed the material. 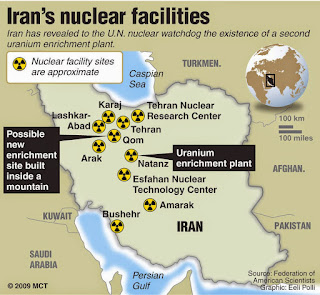 Here’s another document from the archive. This is the master plan of Project Amad. Iran said to the IAEA, no work has been conducted with multi-point initiation. This is multi-point initiation. You’ve got to forgive me, this jargon, this scientific terminology is something that is necessary to understand the production of nuclear weapons. But here’s what they say, no work has been conducted with MPI technology in hemispherical geometry. But again, the archive shows that this is a complete fabrication. Iran conducted extensive work with MPI technology in hemispherical geometry. There’s an example. Hundreds more documents prove it.

So what I’ve shown you tonight is just a fraction of the total material that we have. But even from this sample, you can draw four main conclusions.

First, Iran lied about never having a nuclear weapons program. 100,000 secret files prove that they lied. Second, even after the deal, Iran continued to preserve and expand its nuclear weapons know-how for future use. Why would a terrorist regime hide and meticulously catalogue its secret nuclear files, if not to use them at a later date. Third, Iran lied again in 2015, when it didn’t come clean to the IAEA, as required by the nuclear deal. And finally, the Iran deal, the nuclear deal, is based on lies. It’s based on Iranian lies and Iranian deception. 100,000 files right here prove that they lied.

Yes you did. Yes you do. And the atomic archive proves it.

The nuclear deal gives Iran a clear pass to an atomic arsenal. It does so because it gives them the three components that are necessary to produce this arsenal.

First, unlimited enrichment in a few years. And they plan to do that. They plan to have several hundred thousand advanced centrifuges with which they can enrich mountains of uranium for that core that I showed you before. For many, many such cores. Second, it completely fails to address Iran’s continued development of ballistic missiles. And third, and this is new, it completely fails to address Iran’s secret nuclear bomb program and its advanced work on weaponization. We just did.

WASHINGTON — President Donald Trump announced on Tuesday the United States will withdraw from the Iran nuclear deal. The U.S. will not extend waivers on sanctions targeting Iran’s nuclear program, effectively ending its compliance with the 2015 international agreement under which Iran accepted restrictions on its nuclear program in exchange for economic relief.

“I am announcing today that the U.S. will withdraw from the Iran nuclear deal,” Trump said at the White House. “We will be instituting the highest level of economic sanctions.” Trump accused the deal ― officially called the Joint Comprehensive Plan of Action (JCPOA) ― of being poorly negotiated and lacking enforcement mechanisms. He said it allows Iran to develop a nuclear weapon in a short time, but offered no evidence to back these assertions.

“At the heart of the Iran deal was a giant fiction: that a murderous regime desired only a peaceful nuclear energy program. Today, we have definitive proof that this Iranian promise was a lie,” Trump said.

Nuclear experts and European officials criticized Netanyahu’s speech for pandering to Trump and offering essentially no new information on Iran’s nuclear activities. Much of Netanyahu’s presentation centered on information that was publicly available in a 2007 declassified intelligence report, and Netanyahu did not state that Iran was in current violation of the deal.