In the Burmese lunar year 774, the Christian year 1411, Shans from Mawtone Mawkel invaded the town of Myedu in upper Burma. King Mingaung of Ava sent an army of eleven corps led by the Crown Price Minyekyawzwa to repel the Shans. The huge army consisted of three hundred war elephants, four thousand strong cavalry, and eighty thousand strong infantry. Once Minyekywzwa reached Myedu he immediately attacked and destroyed the smaller army of Mawtone Mawkel brothers. As the brothers fled on horseback to China, Minyekyawzwa brought their families, elephants, horses, and many prisoners of war back to Ava.

A few months after Myedu war Minyekyawzwa marched down into Lower Burma and attacked Pegu. Riding the Pegu King Yarzardayit's own war elephant called Bagamat, Thameinbayan, a son-in-law of Mon king, came out of Pegu and had a duel with Minyekyawzwa. But he was defeated and taken prisoner together with his elephant Bagamat. Minyekyawzwa then marched farther to Bassein and laid siege to the town. But Bassein was too strong to be taken. So the Burmese army marched to nearby Myaungmya and laid siege to the town. During the long siege, Minyekyawzwa took Thameinbayan and more than twenty high-ranking Mon prisoners of war back to Ava in eight fast boats along the River Irrawaddy. The upstream trip took eleven days. Minyekyawzwa stayed for only seven days in Ava and came back down to Lower Burma. The return trip downstream to the town of Dala across the river from Dagon  (Rangoon) took only four nights and five days. His army then laid siege to the towns of Dagon and nearby Syriam.

Meanwhile, the fleeing Mawtone Mawkel brothers had reached China, where they begged the Chinese Emperor Uteebwa to help them to rescue their captured families now in Burmese hands. Chinese sent their General Erawaka with an army of two hundred war elephants, two thousand strong cavalry, and forty thousand strong infantry into Burma and reached Ava, then the royal capital of Burma. The Burmese army led by Minyekyawzwa then was waging a protracted war of attrition against Yarzardayit led Mons near Pegu in Lower Burma and couldn't come back to relieve the capital Ava. The invading Chinese surrounded Ava and sent in an ultimatum demanding that Burmese either release the captured families of Mawtone Mawkel brothers or come out and fight them outside. Burmese had refused and the Chinese laid siege to Ava, and after a month the Chinese army had run out of food and so they sent another ultimatum into the besieged city.

This time the Chinese had challenged the Burmese to a duel on horseback and if their man was defeated they would end the siege and withdraw, but if their man won Burmese had to release the families of Mawtone Mawkel brothers. In a court gathering King Mingaung asked for anyone who dared to take the Chinese challenge, but none there dared as all the Burmese warriors and most of the Burmese lords were with Minyekyawzwa in Lower Burma. Then the lord of Paungde told the King about the Mon prisoner Thameinbayan, and advised him to ask Thameinbayan to take the challenge as he was the bravest Mon warrior who even dared to fight Minyekyawzwa in an elephant duel. So King Mingaung ordered and Thameinbayan in leg Irons was brought to him.

King Mingaung asked Thameinbayan if he was brave enough and willing to face the Chinese warrior, and the Mon lord Thameinbayan answered that he wasn't afraid of anyone on this surface of the earth, face to face, sword to sword, shield to shield, either on an elephant, or on a horse. So the Burmese king released him and let the princesses wash his hair and give him a feast good enough for a king. After that King Mingaung promised him a reward better than from his own Mon king if he defeated the Chinese warrior, Garmani. Thameinbayan bowed to the king and guaranteed the favourable outcome for the Burmese, his captors.

King Mingaung then showed Thameinbayan every single horse in Ava to choose, but he didn't find the horse of his liking. Only later Thameinbayan saw and liked a mare in the colour of tamarind seed grazing by the moat and took it as his horse. He then told Burmese he needed seven days to know the horse well, and he would then face the China's Garmani on the seventh day from then. Once Burmese told the Chinese the date for the duel their hero Garmani spent that seven days drinking and eating and boasting to kill Thameinbayan horribly on the day they meet.

On the appointed day King Mingaung looked at Thameinbayan and liked what saw and said that the Mon lord was strong and brave and calm as his name had preceded him. He then gave Thameinbayan his own ruby crusted royal sword and said, “My son, do not to lose my sword!”, and Thameinbayan replied, “We will win, Leave it to me.” He then asked, “I have a basket with me tied to the saddle. Once Garmani is speared, I will cut his head and put it in the basket to bring back. I need a hook to pick his head up from the ground. Please give me a hook?”

So King Mingaung gave him a goading hook used in plodding an elephant behind its ear, but many Burmese lords laughed at Thameinbayan and said that our Mon hero was already looking for a lemon to cook the rabbit even before he had a rabbit in hand. Thameinbayan just bowed to the King and rode out of the besieged city towards the Chinese army. He was followed by a few people who could speak Chinese. All the people of Ava including the Buddhist monks climbed up the city wall to watch the duel ground from above as Garmani also rode out from Chinese army's camp to meet Thameinbayan once he saw him coming out. 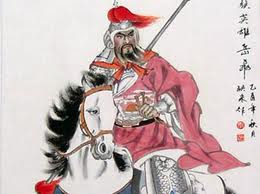 In a full body armour with a ruby crusted enormous sword in his huge right hand, seven foot tall Garmani rode a giant red horse with a gold saddle. His face was painted black and he also carried a gold-plated long spear. Under a helmet of seven steps, he looked like a Chinese demon straight out of their folklore. He met Thameinbayan near the water-filled moat. Through the interpreters Thameinbayan said to him that they both were the lords and warriors, and so they should show the people watching from both sides what they were capable of on the horseback. Garmani agreed.

Immediately Thameinbayan yelled out to Garmani that they had ridden three times and now was the time to fight. Holding the short spear in right hand behind his back and stretching the left hand by his side, he rode away from Garmani. Garmani chased him immediately. As Garmani reached near him, Thameinbayan wheeled his horse around to the right and faced him. After stopping in his track Garmani immediately raised his enormous sword and tried to strike down Thameinbayan with a mighty stroke.

In the process the thread holding his underarm plates broke exposing his flesh through a gap of at least four fingers width, and Thameinbayan, expecting that perfect opportunity, swiftly sent his spear thrust through the gap. The spear went in at Garmani's right underarm, through the body, and came out at left underarm, killing Garmani on the spot. He then cut his head with a single stroke of his sword and picked the still rolling head up from the ground with the goading hook and placed it in the basket tied to his saddle. He then rode back and entered Ava while the mass of people on the wall cheered. Even the Chinese were amazed by the short and decisive fight and they said that Thameinbayan was not a man but a demon from hell.

Hugely satisfied King Mingaung gave him rewards and married him to his youngest daughter Talokeyarzathu. The Burmese king also gave Thameinbayan the town of Legai. The people of Ava also gave him many rewards. As promised the Chinese army folded their camp and withdrew back to China.

(Translated from U Kala's Maha-yarzawin-dawgyi)