US$, Sin$, and Burmese Kyat's History by Zaw Aung 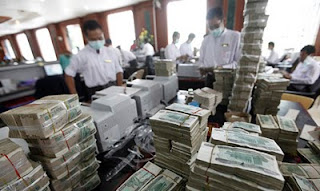 In 2011 the year of so-called semi-democracy, one American Dollar was 750 kyats, one Singapore Dollar was 620 kyats, an average apartment was 50 million kyats, a Toyota Hilux pickup truck was 20 million kyats, the telephone connection with a handset was 500,000 kyats, and a plate of Biriani was 1,200 kyats. (All are approximate prices.)

In 1999 the GDP of Burma was only 14 billion US$. But the Gross Domestic Product has risen drastically since the Yadana Gas Pipeline was constructed and Burma started exporting her abundant natural gas to the neighboring energy-hungry Thailand.

In 2010 the GDP of Burma reached to 77 billion US$ and still increasing. Foreign Direct Investment in Burma in 2011 is 20 Billion US$ which is much higher than Vietnam. That is very promising for Burma.

Particularly promising is there are many reformists and a few business oligarchs (so-called cronies) in new Burmese Government. And ASSK and the opposition parties are also positive and cooperative about the serious reforms promised and being slowly brought in by President Thein Sein-led Government.

Positive improvements such as relaxing of media restrictions and effective tax collection from economic enterprises have bee carried out so far and to everyone’s surprise Burmese kyat has been found seriously appreciating against other currencies in last two years.

US Dollar exchange rate have gone down below 900 kyats in last two years and caused many difficulties nationwide. Most media in Rangoon even wrote about the academic paper of Dr. U Myint the Chief Economics Adviser for the President and a close friend of ASSK on the issue of appreciating foreign exchange rate.

Even though the new Government has been trying to attract Foreign Direct investment for various sectors of economy most FDI in Burma are for particular sectors like natural resources and labor-intensive manufacturing. For example: natural gas, petroleum, hydro-electric, jade, teak, and garments.

Kyat was established on 1 July 1952 with the base rate of one Kyat an Indian Rupee. At that time one US Dollar was 4.7619 Kyat or Rupee. Following table is the US$ rate for both Burmese Kyat and Singapore Dollar together with the chronological events from Burmese political scene. 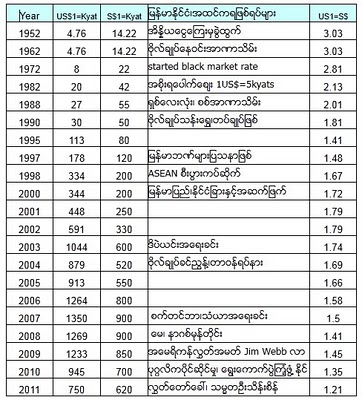 But the official exchange rate used by the Burmese Government is still fixed at ridiculously low 6.50 Kyats a US$ and even the 2011 Parliament has now been discussing how to re-rate Kyat officially and realistically.

I’ve been working overseas last 20 years as I was really sick of our country surviving by selling everything we have both under-ground and above-ground. Also I have to admit that I don’t know much about the economy of Burma. But I still am encouraged by the new Government’s action in raising the value of Kyat.

If you look at the world economy, the 2008 Global Financial Crisis (GFC) appears to be repeating. Normally the property prices go up if the economy is bad. Back in Burma the house prices are going up. Other countries with seemingly bad economies also have rising house prices.

Now many Burmese people working in Singapore are facing serious difficulties. Due to the obstacles in renewing their work-permits, difficulties in getting new work-permits, more expensive housing, and getting fewer Kyats for their Sin$ earnings it is no longer lucrative or even economical for Burmese nationals to come and work in Singapore.

It is almost impossible for the Burmese Government to raise Burma to the economic and prosperity level of Singapore in a short period. In term of per-capita income Singapore is right at the top with other small but prosperous nations like Norway and Qatar. Despite its tiny size Singapore has a GDP double that of Burma and Vietnam among the SE Asia nations.

The whole world will acknowledge the currency of a country once its GDP grows to a decent level. People can even say that the country is getting richer.

Growing GDP implies that the tax revenue is more since about 10% of GDP goes into the Government coffers. The more tax revenue there is the more money could be spent on the nation’s military, education, social welfare, health, roads, bridges, and housing constructions.

In Singapore every working person is forced by the Government to save 30% of their income (salary) as the CPF (Compulsory Provident Fund) system. That money is used by the State to invest in the nation’s economy and the obvious result being Singapore getting richer and richer over time.

From the following tables you can see the Burma’s GDP is rising drastically over the years. And to overtake Vietnam and then reach Singapore and Malaysia the Burmese now working overseas must come back home to Burma. 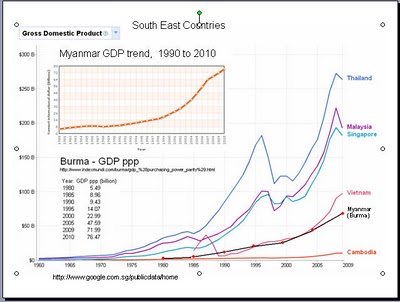 But we can’t go home yet as there are not enough jobs and we still need to wait till this global economic crisis is over. Burma still needs to accumulate national savings or Foreign Reserve Money, attract more Foreign Direct Investment, and eliminate Tax Evasion and Systemic Corruption. Only then there will be enough jobs for all of us to go back home.

If you study the history of US$ Exchange Rate you will find out that the currencies of Singapore, Japan, Germany, and Switzerland are historically very strong. Compared to many other currencies American Dollars also is very strong. United States is still the most economically powerful country. 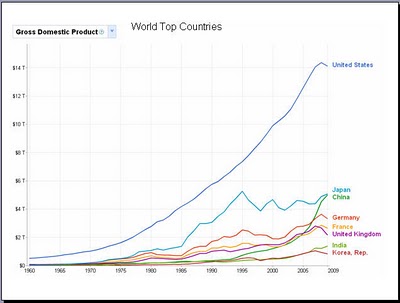 By having a strong Kyat Burmese Government no longer needs to tax the income of Burmese working overseas as they are the ones bringing in much needed hard currency to Burma. So the foreign income tax now is reduced from 10% to only 2%. That is good, no it is great. No other country ever taxes the personal incomes of their citizens working overseas.

Anyway, we must welcome the appreciation of our Burmese Kyat!